While refusing to grant Palestinians building permits, the Israeli authorities have recently intensified their demolition operations targeting Palestinian homes, justifying their actions by claiming that these homes were built without permits. 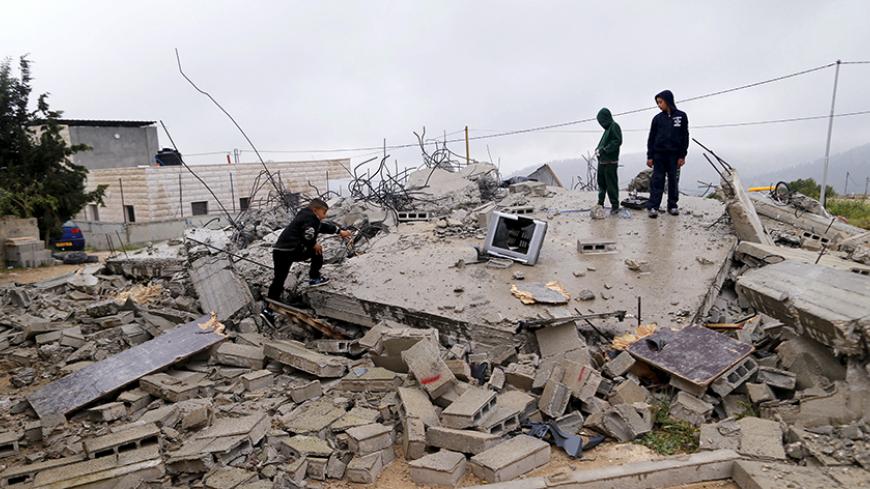 Palestinian boys stand atop the rubble of a house after it was demolished by Israeli bulldozers in the West Bank village of al-Walaja near Bethlehem, April 12, 2016. - REUTERS/Ammar Awad

RAMALLAH, West Bank — Layla al-Isawi is concerned and fears the Israeli authorities might demolish her family’s house in the Issawiya neighborhood of Jerusalem, allegedly because the family did not have a building permit from the municipality. In an interview with Al-Monitor, Isawi, 69, said she was surprised when she found a demolition notice on her door on May 9 after she returned from a visit to Hasharon prison in Israel, where her daughter Shirine is kept.

Isawi has been living in her family home for more than 40 years with her husband and eight children; the ground floor was built in 1969 and the second floor in 1996. She now worries that it will be destroyed, just like the house of her son Raafat, which was demolished on Jan. 1, 2013, under the same pretext of lack of a building permit.

Speaking to Al-Monitor, the head of the Jerusalem Legal Aid Center, Issam al-Arouri, said the Israeli municipality in Jerusalem and the Israeli Interior Ministry have been issuing orders to destroy houses and facilities that belong to Palestinians and were built without a permit. The Israeli authorities often refuse to grant building permits to Palestinians. The civil administration in Area C in the West Bank executes these orders. In the rare cases where building is approved by the Israeli authorities, Palestinians are burdened by issuance fees, which may amount to 120,000 Israeli shekels ($32,000).

Arouri said, “Israel only approves less than 1.5% of Palestinian applications for building permits; this is why they end up building without them. In Jerusalem, Israel issues a lot more demolition orders than building permits. The Israeli authorities speak of 25,000-30,000 houses in Jerusalem that were built without a permit, and therefore might be subject to demolition,” without basing the decision on certain specifications.

According to statistics published in September 2015 by B'Tselem, the Israeli Information Center for Human Rights in the Occupied Territories, Israel has partially or completely demolished a total of 1,049 houses between 1999 and 2004 in the West Bank, and 927 houses between 2006 and August 2015. In East Jerusalem, 988 houses built without permits were destroyed between 1999 and 2014, as per B’Tselem statistics published on Sept. 17, 2015. This came amid talks about over 30,000 houses in Jerusalem without permits, which means Israel only granted permits for a few houses, but there are no statistics in this regard.

Since the beginning of the occupation in the West Bank in 1967, including East Jerusalem and the Gaza Strip, Israel has adopted the demolition policy under different pretexts, mainly the lack of permits. In an interview with Al-Monitor, international law professor at Birzeit University Hanna Issa said, “Israel has been violating international law and resolutions, basing its actions on Article 119 of the British Mandate law, which was abolished right after the inception of the State of Israel in 1948."

The house demolition policy contradicts UN Security Council Resolution 1544 of 2004, calling on Israel to “respect its obligations under international humanitarian law, and insists, in particular, on its obligation not to undertake demolition of homes contrary to that law.”

The Israeli policy of house demolition also violates Article 53 of the Fourth Geneva Convention, stating, “Any destruction by the Occupying Power of real or personal property belonging individually or collectively to private persons, or to the State, or to other public authorities, or to social or cooperative organizations, is prohibited, except where such destruction is rendered absolutely necessary by military operations”; as well as Article 46 of The Hague Convention of 1907, which states, “Family honor and rights, the lives of persons, and private property, as well as religious convictions and practice, must be respected. Private property cannot be confiscated.”

Issa explained that Israel destroyed 23,100 homes since 1967 as part of a collective punishment policy against Palestinians, with the aim of emptying regions, especially Jerusalem, for the benefit of the settlers.

The house demolition policy was harshly criticized by many international parties on several occasions, with the last one on May 16, when Israeli forces demolished and disassembled 12 EU-built homes in the Bedouin neighborhood in Jabal al-Baba east of Jerusalem, claiming they had been built without Israeli authorization. The incident led Robert Piper, the UN coordinator for humanitarian assistance and development aid for the occupied Palestinian territory, on May 19 to strongly criticize the Israeli move, while the European Union denounced the confiscation and demolition in a statement May 20, and only demanded Israel to put an end to this policy.

The head of the Colonization and Wall Resistance Commission, Walid Assaf, spoke to Al-Monitor about the role of the Palestinian Authority, saying, “There are 155 Palestinian neighborhoods in Area C that were built without a permit or a structural plan [to organize the phases of construction and cover all of the buildings facades and the infrastructure]. Since 1967, Israel has been refusing to approve any structural plan. The Israeli High Planning Council stipulates that to grant a building permit, the building must fall under a Palestinian structural plan. Therefore, since all structural plans have been rejected, no building will ever be granted the necessary permit and could be destroyed.”

Assaf said that Israel has intensified demolition operations in the first quarter of this year, with 600 demolitions to date. This figure is higher than the total of 587 demolitions reported last year.

Assaf indicated that the commission has been working with EU-affiliated organizations to prepare 103 structural plans for Palestinian neighborhoods in Area C. After submitting them to the Israeli authorities, only three were approved. Meanwhile, the Civil Administration and High Planning Council approved 103 plans for settlers and is now examining 177 new ones.