Jerusalemites forced to destroy own homes

Some hapless Palestinian builders in Jerusalem are demolishing their own unpermitted homes to avoid paying the enormous demolition costs charged by the Israeli authorities. 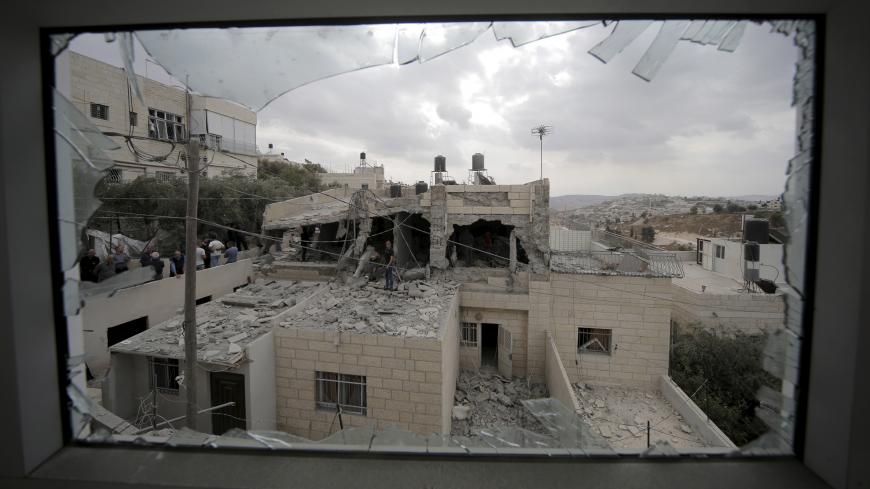 RAMALLAH, West Bank — US President Donald Trump's recognition of Jerusalem as Israel's capital has started casting its shadow over the city. Israel is expected to act in accordance with this announcement by accelerating its settlement construction and demolishing Jerusalemites’ houses. It could make it even harder for Palestinians to obtain construction permits.

Jamal Amr Abu Tair, from Umm Tuba, southeast of Jerusalem, spent the evening of Nov. 25 demolishing a house he owns and had been renovating for two years. He caved to pressure by the Israeli municipality in Jerusalem and took action to avoid the huge fees ranging between $15,000 and $20,000 that are incurred when the municipality destroys houses built without permits.

Abu Tair told Al-Monitor that he was planning on finishing the small house for his eldest son, who was to live in the house after his marriage in summer 2018.

He added, “I received the final notice from the Israeli municipality to demolish the house Nov. 23. I decided to destroy it myself. If I hadn’t, the municipality would have taken matters into its own hands and forced me to pay the full demolition fees, which are quite high.”

He noted, “It was the hardest thing I've ever had to do. I destroyed my own house that I had spent two years building for my son and his wife to live in. I cannot afford to pay the municipality the demolition expenses. I will hold the wedding celebrations for my son in due time, and I will give him and his wife a room in the family house.”

Moaz al-Zaatari, head of Al-Maqdese, an organization that monitors human rights violations in Jerusalem, told Al-Monitor, “Citizens are forced to destroy their houses with their own hands when they are unable to get permits for them, to avoid paying the demolition fees.” He noted that the construction permits, in the rare event they become available, cost up to 120,000 shekels (around $32,000).

He said, “The Israeli municipality usually sends out the first notice for demolition citing the lack of a construction permit and files a lawsuit against the landlord, who then has to appear before the Israeli judiciary. The court gives the landlord a time limit to obtain the permit. Meanwhile, the municipality imposes a fine for illegal construction.”

Zaatari went on, “Jerusalemites have to pay the municipality a fine for illegal construction, in addition to the expenses for obtaining the permit and the attorney fees in court. The citizen is financially drained and a few years later is unable to get a construction permit because of the Israeli authorities’ refusal. He has to settle for the lesser of two evils: destroy the house himself rather than wait for the municipality to destroy it and force him to pay the demolition fees.”

He also noted that Al-Maqdese documented 22 such demolitions in Jerusalem by the end of November, and there were 28 documented demolitions of this kind in 2016.

Many observers hold that Israeli demolitions in Jerusalem violate international laws and agreements. Hanna Issa, instructor of international law and general secretary of the Muslim-Christian Association, told Al-Monitor that the demolitions violate Article 53 of the 1949 Geneva IV Convention, which states, “Any destruction by the Occupying Power of real or personal property belonging individually or collectively to private persons, or to the State, or to other public authorities, or to social or cooperative organizations, is prohibited, except where such destruction is rendered absolutely necessary by military operations.”

He said that the demolitions are also a clear violation of Article 17 of the Universal Declaration of Human Rights, dated Dec. 10, 1948, which states, “Everyone has the right to own property, alone as well as in association with others. No one shall be arbitrarily deprived of their property.”

“The Israeli authorities rely in their house demolition policies on Article 119 of the 1945 British Defense (Emergency) Regulations despite knowing that the British Mandate law became inapplicable with Britain’s retreat from the Palestinian territories May 15, 1948,” Issa told Al-Monitor. He also noted that Israel’s ongoing demolition of houses violates the 2004 UN Security Council Resolution 1544, calling on Israel to “respect its obligations under international humanitarian law, and insists, in particular, on its obligation not to undertake demolition of homes contrary to that law.”

The demolitions have enormous negative social and economic repercussions for the owners. Ziad al-Hamouri, director of the Jerusalem Center for Social and Economic Rights, told Al-Monitor, “Building a house in Jerusalem is costly. Nothing is worse than having to destroy a house you spent years to build to shelter your family. These moments are engraved in the minds of our children and families.”

He added, “When the owner destroys his own house, negative effects are left on the family, which finds itself without a home. The children cannot erase the image of their father destroying … the safe roof above their heads.”

With Israel’s rapid settlement construction and ongoing demolition policy in Jerusalem, citizens find themselves dealing with the repercussions alone. The Palestinian and Arab position toward the US recognition of Jerusalem as Israel’s capital is so far limited to denouncements and condemnations.