The number of Palestinian homes demolished by Israel has sharply increased this year, leading experts to question Israel's agenda. 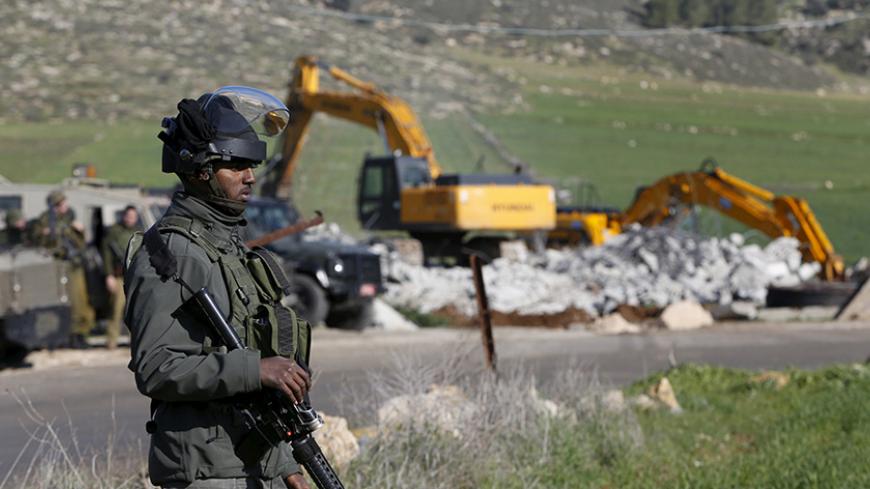 An Israeli border policeman stands guard during the demolition of a Palestinian house under the order of the Israeli army, in the West Bank town of Dura, south of Hebron, Jan. 20, 2016. - REUTERS/Mussa Qawasma

A recent report by the United Nations Office for the Coordination of Humanitarian Affairs (OCHA) in the Occupied Palestinian Territories was jarring. In addition to the usual listing of casualties and injuries among Palestinians, it reported a huge spike this year in the demolitions of Palestinian-owned structures by Israel.

In the Aug. 4 report, OCHA cited 684 buildings as having been demolished so far this year in the West Bank, including East Jerusalem, compared to 531 for all of 2015. This 25% increase in demolitions has largely affected East Jerusalem and locations designated as part of Area C under the Oslo Accord. Area C constitutes more than 60% of the West Bank and is under Israeli administrative and security control. To date this year, 574 Palestinian structures have been destroyed in Area C, compared to 453 in 2015. In East Jerusalem, the number of buildings destroyed up until Aug. 4 stands at 110, compared to 78 in 2015.

Palestinians and Israeli activists fear that Israel is focusing on Area C and East Jerusalem for political reasons. Salim Shawamreh, whose home in East Jerusalem’s Anata village was destroyed for the seventh time, was forced to temporarily move to Kufr Aqab. He hopes one day to return to his land and rebuild his house.

Shawamreh told Al-Monitor, “For the first 20 years, after the occupation [began], the Israelis left me alone and didn’t destroy my home. But then they kept destroying my house, and I would rebuild it. They destroyed my home seven times.”

A father of seven, Shawamreh said that at one point, he spent a considerable amount of money trying to legally stop the demolitions, but to no avail. “I spent 3,500 Jordanian dinars [$5,000] to get the land deed to prove that I owned the land on which the house was built, but it didn’t help,” he said. Land deeds proving ownership can be traced back through Jordanian, British Mandate and Ottoman records.

Building in East Jerusalem is almost impossible for Palestinians because Israel refuses to issue zoning master plans. Without an official planning map to regulate building, it is impossible to get a building permit, thus forcing families like Shawamreh’s to build without a license. The unlicensed homes are then destroyed, with the owners being forced to pay the cost of their home's destruction.

Daniel Seidemann, an Israeli lawyer specializing in Jerusalem-related issues, told Al-Monitor that the repeated targeting of communities in the Anata, Issawiya and Silwan neighborhoods confirms that the demolitions are not random. “While some house demolitions are being carried out as punitive action, to remind the residents of Jerusalem who is the boss, these repeated destructions are clearly agenda-driven actions.”

Both US and European Union officials have spoken out against home demolitions. EU officials have reacted to the increase in demolitions by warning Israel that they can’t justify its policies in Europe. Israeli daily Haaretz reported that Lars Faaborg-Andersen, the EU ambassador to Israel, had spoken to Yoav Mordechai, Israeli coordinator of activities in the territories, about the EU's perspective. The paper reported Faaborg-Andersen explaining how it is “impossible” to explain Israel's policy in Europe, as “on the one hand, [Israel] destroys illegally constructed buildings and on the other, it offers the Palestinians no possibility of building legally and fails to approve master plans and development for the Palestinians in Area C.”

Regarding the reason for the uptick in house demolitions in East Jerusalem, Jeff Halper, the co-founder of the Israeli Committee Against House Demolitions, told Al-Monitor, “These demolitions are intended mainly to keep Palestinians confined to small pockets and to maintain the induced housing shortage so that Palestinians will be forced out of the city, thereby keeping the desired overwhelming Jewish presence in the city.”

The more worrisome demolitions are those taking place in the Jordan Valley, leading many experts to sound the alarm that they are a prelude to annexation. Jad Issac, the director of the Applied Research Institute – Jerusalem, believes that Israel wants to establish two states in the West Bank. “Israel plans to give Israeli settlers around 75% of Area C, which is a total of 60% of the West Bank, eventually turning the Palestinian state into isolated cantons on less than 50% of the original area,” Isaac told Wafa, the official Palestinian news agency, July 12.

Jamal Dajani, the director of strategic communications at the Palestinian prime minister’s office, referred to home demolitions to debunk the repeated assertion by Israeli Prime Minister Benjamin Netanyahu that it is a myth that the settlements are a hindrance to peace. “This year alone, Netanyahu’s government has flattened 660 houses and other structures, leaving almost 1,000 people homeless, many of them children. How is this cruel destruction of property and livelihoods not an obstacle to peace?” Dajani wrote Aug. 7 in the Huffington Post.

Israeli human rights organization B’Tselem has also expressed its opposition to home demolitions. In a piece published July 27, B’Tselem humanized Palestinians by telling the stories of individuals who had lost their homes. The organization cited the political nature of the destructions, saying, “Israel acts to establish facts on the ground and to create a reality that it will be difficult to change in any future agreement. … [The state takes action] to displace and expel Palestinian residents from Area C, under flimsy pretexts.”

While the political motivations behind Israel’s actions are becoming crystal clear, neither the Palestinians nor the international community seem to have found a way to put a stop to this transgression against Palestinians under occupation. With the world focused on the Islamic State radical phenomenon and the Syrian refugee crisis, Israel appears to feel the time is ripe to take actions it would not dare undertake otherwise.