Israel expanded its policy to demolish houses and facilities of Palestinians, including those funded by international donors. 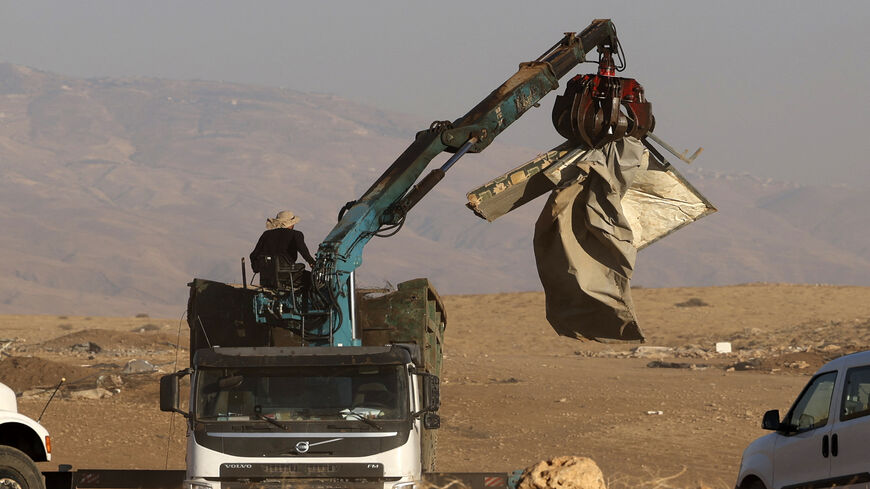 Workers dismantle tents during a demolition operation led by Israeli security forces, of a Palestinian Bedouin encampment in the area of Humsa, east of the village of Tubas in the Jordan Valley, July 7, 2021. - Jaafar Ashtiyeh/AFP via Getty Images

RAMALLAH, West Bank — Dozens of Palestinians who live in the Bedouin community Ras al-Tin in the Jordan Valley were caught by surprise when Israeli forces raided the area July 14 and confiscated 49 structures of residents and their cattle, which constitute the source of income of 84 Palestinians.

Ras al-Tin is one of several herding communities in the Jordan Valley. It is located in Area C, which is under full Israeli control, as per the Oslo Accord.

Ersheidat said that 13 families from the community were directly affected by the confiscation and attacks. He noted that they received some aid, such as tents, from citizens and the Colonization and Wall Resistance Commission, but that this assistance is not enough. The community consists of 37 families with more than 300 individuals, and there is an urgent need to foster people’s resilience, in light of Israel’s measures aimed at displacing them from their land.

On July 7, the Israeli forces caused extensive destruction in Khirbet Humsa al-Fouqa in the northern Jordan Valley, destroying citizens’ homes, including tents and animal pens, and forcibly expelling the residents with military trucks to another area in the Jordan Valley. Eleven families were made homeless and displaced by that operation.

Khirbet Humsa al-Fouqa is one of 38 Bedouin villages located partially or completely within an area declared by Israel as a military training site. It was completely demolished in November 2020. On July 15, the Israeli forces destroyed the building of a family of eight, which had been built for one of the affected families and located outside the military site.

Since early 2021, Israel has expanded its policy to demolish Palestinian homes, causing the displacement of hundreds of citizens and leaving them with economic losses worth millions of dollars.

A report published July 15 by the United Nations Office for the Coordination of Humanitarian Affairs revealed that the Israeli authorities have demolished at least 474 Palestinian-owned structures in the West Bank since early this year, including 150 buildings funded by international donors. These operations led to the displacement of 656 Palestinians, including about 359 children.

The recent demolitions provoked condemnation from many international parties, which called on Israel to stop its policy of house demolitions, while European Union representatives, ambassadors and consuls visited Khirbet Humsa al-Fouqa July 19. EU representative Sven Kuhn von Burgsdorff stressed to the media that what is going on is frustrating, and that the displacement of the population violates international laws. He noted that the EU is making efforts with all parties to end this policy.

Commenting on the inability of the EU to protect its projects in Area C — which Israel is constantly targeting — EU spokesman Shadi Othman told Al-Monitor, “The EU position is very clear, which is the need to protect its projects wherever they are and shield them from attacks. The EU has clearly and on more than one occasion called on Israel to enable the Palestinians and the Palestinian Authority to carry out real economic and social development in Area C and not to put spokes in the wheels.”

He said that the EU’s continued support for the Palestinian presence in Area C "is in itself a political message to Israel despite all the harassment it is committing; it is a translation of the political calls with Israel. We understand the demands of many Palestinian parties for the EU to take stands and deterrent measures. However, this requires unanimity from EU countries, which have different interests. But they all agree on continuing to offer support and projects in Area C, even in the darkest circumstances and times.”

Othman added, "The payment of European contributions for this year was delayed, due to some internal technical issues. But support will be resumed in October.”

The demolitions carried out by Israel violate international law and have received wide international criticism. But this did not deter Israel. UN Special Rapporteur on the situation of human rights in the occupied Palestinian territories Michael Lynk warned against the continuation of the demolitions. He said in a statement released July 12, “Israel, as an occupying power, is strictly prohibited from destroying Palestinian property unless that is absolutely required for a military necessity during active armed operations.”

He called on the international community “to use the principle of accountability and put it at the top of its agenda. Otherwise, it will not be possible to end Palestinian grievances without imposing an escalating cost on the illegal Israeli occupation.”

Walid Assaf, head of the Colonization and Wall Resistance Commission, told Al-Monitor that Israel expanded in 2021 its demolition of Palestinian homes and its forced displacement policy, as it targeted communities such as Humsa. Al-Mayta community in the Jordan Valley and the Khan al-Ahmar community are also facing threats of forced displacement.

Assaf commented on the international parties’ failure to take any steps against Israel, saying, “Israel does not fear criticism, threats or condemnation, but rather fears harming its interests. So far, the European and international stances have not moved toward punishing Israel for its crimes, and if Israel is not punished, it will remain a state outside international law and will continue its practices unabated.”