Israel prepares to demolish a newly constructed school in a Bedouin community near Ramallah in a move that is set to deprive 50 children of their right to education. 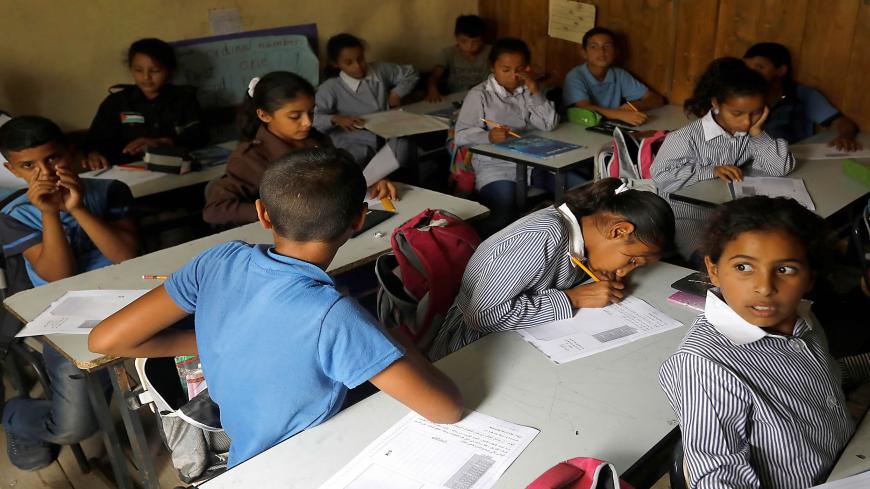 RAMALLAH, West Bank — Some 50 Palestinian children in the Bedouin community of Ras al-Tin and the surrounding Bedouin communities, east of Ramallah in the central West Bank, fear that the Israeli authorities will demolish their newly constructed school, which they started going to in September.

The students are worried about losing the new school that provides them with a safe and stable environment. Due to its proximity to their homes, the students no longer need to walk several miles to schools located in neighboring villages.

A few days after the school opened its doors, the Israeli authorities issued a demolition order. The school’s lawyers immediately petitioned the Israeli Central Court to prevent the demolition, but the court rejected the petition Oct. 8.

This prompted the lawyers to resort on the same day to the Israeli Supreme Court, which issued an order to suspend the demolition for a week.

Abdullah Abu Rahma, director general of the Popular Action and Steadfastness Support Unit at the Colonization and Wall Resistance Commission, told Al-Monitor that the school under threat of demolition is affiliated with the Palestinian Ministry of Education, was established with European Union (EU) funding and is one of Al-Tahaddi schools (Arabic for Challenge) that the ministry has been establishing in Area C and marginalized areas.

Abu Rahma said, “The school consists of only a few tin-roofed brick classrooms and lacks other services. There aren’t even any windows or doors in it.”

He explained that the Israeli authorities want to demolish the school under the pretext that it does not have a building permit.

Area C, which accounts for 60% of the West Bank, is subject to full Israeli administrative and security control, and Israel refuses to grant Palestinians building permits.

In 2018, the Ministry of Education, in cooperation with the Colonization and Wall Resistance Commission, launched an initiative to establish Al-Tahaddi schools across the remote areas of Area C in the West Bank, and the number of such schools currently stands at 18.

Abu Rahma added, “If the occupation authorities decide to demolish the school, we, as popular resistance activists, will hold a sit-in inside the school and confront the occupation forces. If we are suppressed by force and the school is demolished, then we will rebuild it.”

Noura al-Azhari, the school principal, told Al-Monitor that the school year started in early September despite the fact that the school was not fully prepared to receive students. But opening early spared the students from having to walk long distances to schools in the neighboring villages.

Azhari said that having a school and educating children challenges the Israeli occupation and entrenches the children’s right to education.

Ever since the school foundation stone was laid, al-Kaabneh and Abu Kabbash clans, which built the school, have been facing daily harassment on the part of Israeli soldiers and settlers. This harassment continued even after the school opened.

“The soldiers and settlers would storm the school on a daily basis, terrorize children and teachers and threaten us with assault,” Azhari said.

According to Azhari, the school consists of five classrooms of 50 male and female students under the supervision of five teachers. “We are expecting the employment of new teachers in different specialties soon,” she added.

Azhari pointed out that the school is a challenge to Israel. The school, she said, protects students from the sun and rain only because of lack of infrastructure and equipment, limiting the services provided to the children, including windows. “But we are very happy with this school, and to us it is better than any palace. We shall cling to it and fight to prevent its demolition,” she added.

Although the school was built with funding from EU countries, this has thus far failed to provide it with immunity against demolition, especially considering that many of the EU projects in Area C were repeatedly demolished over the past years.

Spokesman for the EU in Palestine Shadi Othman told Al-Monitor that Ras al-Tin school was funded by various EU countries, which are currently following up with all parties, including the Israeli side, on this issue.

Othman added, “The EU during its follow-up of the matter with the Israeli side called on it to respect the Palestinian presence in Area C and to enable economic and social development in it in accordance with the provisions of international law. It also called on Israel to commit not to undermining projects funded by the EU in these areas.”

Asked about the steps that the EU will take in the event the demolition materializes, Othman said, “The EU efforts are currently focused on stopping the demolition, especially since the school has a humanitarian dimension and provides a service to students. In the event that Israel demolishes the school, we would cross that bridge when we get to it. It is too early to talk about the EU response in the event of demolition.”

Israel has been increasingly demolishing Palestinian facilities since the beginning of this year. The United Nations Office for the Coordination of Humanitarian Affairs stated on Sept. 28, “The Israeli forces demolished 506 Palestinian buildings in the West Bank and Jerusalem this year.”

The EU heads of missions in Jerusalem and Ramallah expressed in a press release Sept. 8 their concern over the escalation this year of Israeli demolitions of Palestinian homes in the West Bank, including East Jerusalem, as such demolitions included facilities financed by the EU, led to the displacement of Palestinians, harmed their communities and came in violation of the international law that impedes the possibility of a two-state solution.