Israel's destruction of a European-financed school in the West Bank has forced Palestinian children to instead attend classes in a tent. 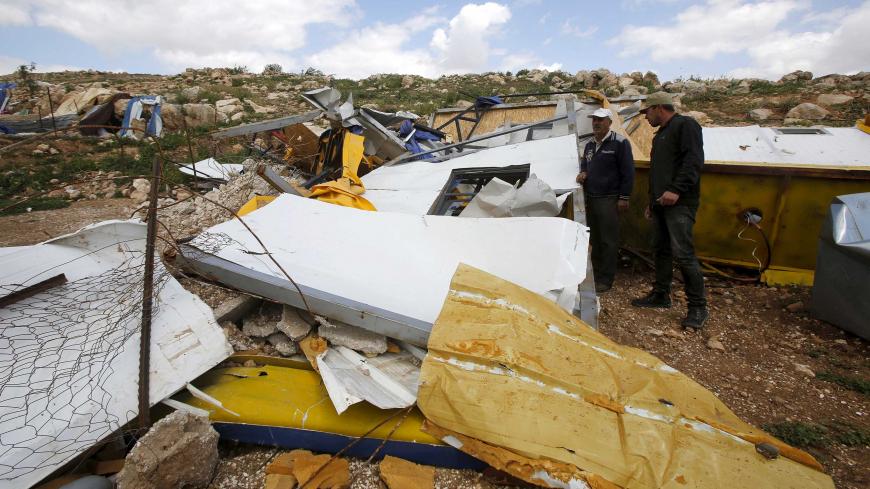 Palestinians look at the remains of a school that was funded by the European Commission Humanitarian Aid and Civil Protection and demolished by Israeli forces, in Khirbet Tana, near the West Bank city of Nablus, March 29, 2016. - REUTERS/Abed Omar Qusini

RAMALLAH, West Bank — Palestinian activists restored some good cheer to primary school students in Jub al-Thib as they set about rebuilding their school over the night of Sept. 9-10 using concrete blocks. On Aug. 22, Israeli authorities had demolished the only school in this West Bank village, located east of Bethlehem, a day before the start of the new school year. Israel has practically banned construction by Palestinians in Area C, where Jub al-Thib is located, denying them permits to do so and prohibiting the use of concrete. It destroyed the school building on the grounds of being constructed without a permit. Area C is completely controlled by Israel, as set out in the Oslo Accord.

The demolition left some of the 64 students in grades one through four in tears. The children had previously attended classes in warehouses and had been looking forward to a new school building. The residents of Jub al-Thib worked for months to build the since-destroyed school, the first to be erected in their village. The European Union provided financial support for the project, and construction proceeded under the supervision of the Palestinian Authority's Ministry of Education and Higher Education.

In an Aug. 23 statement, the Norwegian Refugee Council said, “Right now, some 55 schools in the West Bank are threatened with demolition and ‘stop-work’ orders by Israeli authorities.” Shadi Othman, EU spokesperson in Palestine, said that 20 of the schools are EU-funded, and four, including Jub al-Thib, have been destroyed.

“The EU has taken a firm decision to provide financial support for development projects in these areas and provide all possible humanitarian services, despite the demolition threat,” Othman told Al-Monitor. “Our decision to work in Area C and implement 20 million euros worth of projects falls within the EU's priorities. The EU will intervene immediately to find alternatives for demolished schools until new school buildings are reconstructed.”

Israel's prohibition on construction, threats of demolition and stop-work orders all stand to negatively affect Palestinian students’ ability to obtain an education. Given the lack of resources available, West Bank municipal councils, anti-settlement committees, and other local organizations and prominent figures in Area C work in cooperation with foreign donors in efforts to counter such actions and find alternatives and solutions.

In the case of Jub al-Thib, for instance, to get around the prohibition on concrete, residents had seized on teaching students in warehouses before the proper school building, which had a steel frame, could be erected. After Israel demolished the school, tents were erected on the site so students could continue to attend classes.

In the Bedouin village of Khan al-Ahmar, in East Jerusalem, 170 students are studying in a school that was built out of tires and mud in 2009 after Israel banned construction with cement. They were inspired by such buildings in poor and marginalized areas elsewhere in the world, such as in parts of Colombia.

“This, however, did not stop Israel’s multiple demolition threats,” said Uday Abu Khamis, community spokesperson for the Bedouin in East Jerusalem. “Before building this school, the village had no school. The nearest one was 15 kilometers [9 miles] away. Given the poor means of transportation, it was difficult for students to commute and get to their classes, especially girls. The school, cobbled together from mud and used tires, gives our children the opportunity of having an education up to the ninth grade.”

According to Sadek Khodor, spokesman for the PA Ministry of Education and Higher Education, the ban and demolition threats force the ministry to operate within the margins allowed and to expend energy finding quick alternatives to much-needed schools in cooperation with parents and the local communities threatened with demolition orders. He told Al-Monitor that the structures the communities do manage to construct are called “schools of defiance.”

Khodor added, “The government does not apply to these schools the same standards that apply to other schools. We give priority to filling all their needs irrespective of the cost. Sometimes we even assign one teacher [when there are only] two or three students, as is the case in the Arab Kaabneh Bedouin elementary school in Jericho.” The government hopes that by showing flexibility, it will encourage other communities to open educational facilities regardless of the number of students and type of facility.

Stressing the importance of finding alternatives for demolished schools, Khodor emphasized that his ministry is determined to prevent demolition orders from cutting short the educational process. He explained that when a school receives a demolition notice or a construction moratorium, legal follow-up is provided through a ministerial defense committee and contacts with international bodies to pressure Israel into withdrawing the order. Typically, the courts might postpone a demolition order, but not cancel it.

Although not ideal, the classroom work-arounds so far developed are better than having no schools at all. For the students and their families, the schools are one more means to fight Israeli attempts to force them off of their land.