Israel says it demolished homes in a hamlet in the northern Jordan Valley in order to use the area for Israel Defense Forces military drills. 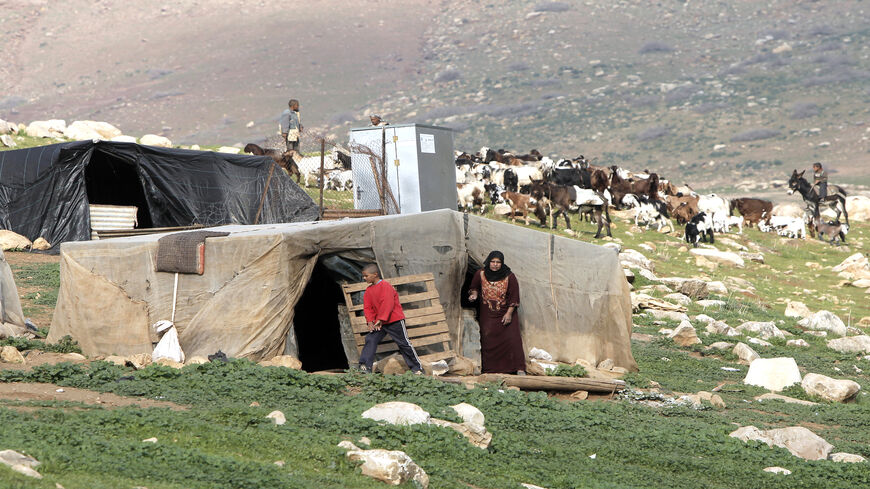 Palestinian Bedouins prepare to evacuate as the Israeli army readies to carry out military exercises in the Wadi al-Maleh area, in the north of the Jordan Valley, West Bank, Jan. 2, 2013. - Ahmad Gharabli/AFP via Getty Images

Israeli forces demolished May 7 the hamlet of the Khirbet Humsa al-Fawqa village in the northern Jordan Valley, imposed a strict siege on it and prevented entry to and exit from it. The forces then started demolishing the residents’ tent dwellings and animal pens, and seizing their properties. Military buses were brought in to expel the residents from the ruins and move them to another location in the central Jordan Valley. This move has left 11 families homeless.

Khirbet Humsa al-Fawqa is one of 38 Bedouin communities located partially or completely on land designated by the Israeli military as a military training zone.

The Palestinian Bedouin community of al-Bikai'a village is located in Area C of the West Bank, in the north of the Jordan Valley. The greater part of this village is located in an area classified by Israel as “a firing zone” used for military drills. Palestinians are prohibited from residing in or accessing this zone, according to the Israeli military.

These communities are the most vulnerable in the West Bank. They have limited access to education, health services and the necessary infrastructure for water, sanitation and electricity. On several occasions since 2012, the residents of Khirbet Humsa al-Fawqa were temporarily displaced since the Israeli authorities were carrying out military exercises nearby. The United Nations Office for the Coordination of Humanitarian Affairs recorded more than 50 temporary displacement incidents during that period.

On July 8, the Palestinian Foreign Ministry issued a statement condemning the displacement of the residents of Khirbet Humsa al-Fawqa as amounting to a war crime. The statement denounced the Israeli forces’ demolition and confiscation of the homes of the village’s residents for the fifth time in a year. The ministry urged the international community to assume its responsibility in this respect.

Article 49 of the Fourth Geneva Convention states that “the Occupying Power shall not deport or transfer parts of its own civilian population into the territory it occupies.” Of note, the number of settlers in the Palestinian territories, including Jerusalem, has reached about 600,000.

Harbi Abu Kabash, a resident of Khirbet Humsa al-Fawqa who was recently displaced, and a father of five boys and one girl, told Al-Monitor the Israeli forces forcibly expelled them from their home at eight in the morning, without warning, and without taking into account the presence of children, women and elders.

“We are now in the open, without shelter, in an area 700 meters [0.4 miles] from Khirbet Humsa al-Fawqa. We are trying to provide food, drink and bedding for our children at our own expense. No one is helping us,” he said.

Abu Kabash, a farmer, stressed his determination to return to Khirbet Humsa al-Fawqa, despite its destruction. “This is a Palestinian agricultural area, not a military area. My family has the documents proving our ownership of the lands,” he added.

Walid Assaf, head of the Palestinian Authority's Commission on Apartheid Wall and Colonization Resistance, told Al-Monitor that what happened in Khirbet Humsa al-Fawqa is part of an Israeli plan of forced displacement and ethnic cleansing targeting the residents of the Jordan Valley.

“This is part of the faltering Trump-Netanyahu plan,” he added. “[Former US President Donald] Trump's term has ended, and so did [former Israeli Prime Minister Benjamin] Netanyahu’s. Yet the plan to annex the Jordan Valley remained implemented on the ground through the displacement of its residents."

He added, “The Jordan Valley has a low population density, estimated at 63,000 people living in large areas. Israel wants to restrict the Palestinians’ presence to closed and isolated cantons in a bid to facilitate the process of their deportation as part of the plan to establish the Jewish state. This strategic plan aims to make the area free of Palestinians by denying them building permits in the Jordan Valley, according to the Allon Plan of 1967.”

Aref Daraghmeh, an expert in settlements and Israeli violations in the area, told Al-Monitor that Israel not only displaced 11 families in Khirbet Humsa al-Fawqa. In June, Israel had displaced a number of Bedouin families in al-Muarrajat in the Jordan Valley under the pretext of military training.

“Palestinians see in the Jordan Valley — targeted by Israeli attacks — a source of security, border protection, a water source and a food basket,” he said.

In a parallel context, Khalil Tafakji, director of the Mapping and Systems Department of the Arab Studies Society, told Al-Monitor the reasons why Israel postponed the eviction and demolition decision in the Sheikh Jarrah neighborhood in Jerusalem, while displacing families in the Jordan Valley. “Communities in Khirbet Humsa al-Fawqa are seen as Bedouins. Israel plans to gather them in villages like Arab al-Jahalin in the Abu Dis area. A school was opened for them with German funding. Meanwhile, any eviction and displacement of Sheikh Jarrah is deemed ethnic cleansing,” he said.

He noted that Israel invokes security reasons for annexing the Jordan Valley, while the reasons are economic. “Israel reaps around $800 million in income from the Jordan Valley, including from dates, flowers and vegetables that are exported to Europe. Also, the Jordan Valley is a strategic reserve for Israel,” he concluded.