Palestinians in Jordan Valley want more to remain in their land

The Palestinian government announced its intention to offer grants for graduates seeking a job in the Jordan Valley with the aim to encourage Palestinian presence in the area, which is highly coveted by Israel. 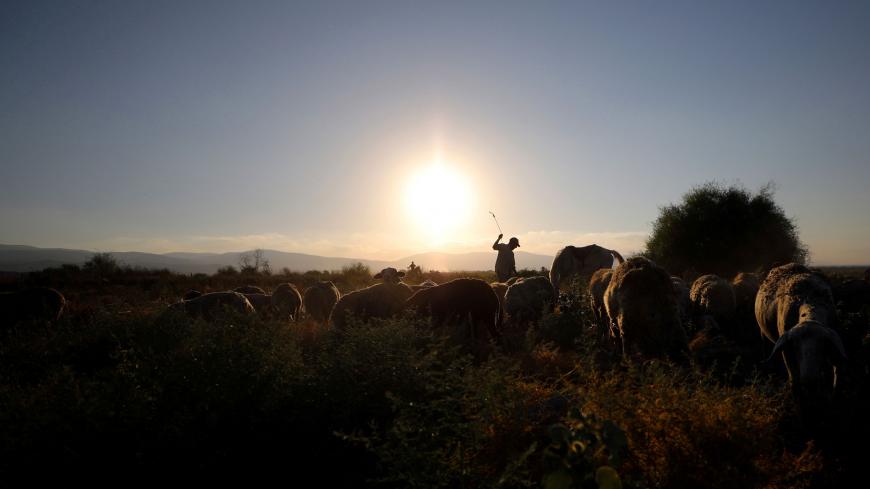 A Palestinian man herds cattle in the Jordan Valley, the easternmost part of the Israeli-occupied West Bank that borders Jordan, July 20, 2019. - REUTERS/Ammar Awad

Mahmoud Bisharat from the Humsa al-Fawqa area in the northern Jordan Valley, does not mind applying for the Palestinian government financial grants, as long as basic services to properly benefit from are provided.

At the opening of his weekly Cabinet meeting Aug. 19, Prime Minister Mohammad Shtayyeh announced that the government would provide money and incentives to Palestinian graduates who are willing to live in the Jordan Valley and work with their families on projects, as part of the government’s plan to enhance the citizens’ resilience in the area.

In its announcement of the grants, the Palestinian government did not provide details of the beneficiaries, how they would be utilized and their value.

Bisharat, 27, told Al-Monitor that he graduated five years ago from the Faculty of Education at Al-Quds Open University but never found employment in this field, which pushed him to work in an Israeli settlement.

He believes the grants plan, if implemented, would be a solution to unemployment and the youths' need to leave their hometowns and look for opportunities elsewhere.

Much like other residents of his area, Bisharat’s home has been demolished more than once by Israeli forces under the pretext of being located in a military zone. However, he has not left his hometown despite the scarcity of water and lack of electricity.

If he gets the grant, he believes he would be able to buy sheep and use them as a source of income. “Resilience in the Jordan Valley is feasible but real government support is required,” he noted.

Khaled Daraghmeh, 30, from the town of Tayasir, in the central Jordan Valley, graduated in 2011 with a degree in Arabic language from Al-Quds Open University. But like Bisharat, he has not found a job as an Arabic teacher, although the Ministry of Education had declared in 2015 that finding work for residents of the Jordan Valley was a priority.

Daraghmeh told Al-Monitor that these announcements are useless in the absence of services provided to the residents of Ein al-Hilweh area in the northern Jordan Valley, and that he even had to relocate to the city of Tubas to get his children into school, as there are no schools in Ein al-Hilweh. “How can we live in an area without electricity, water, transportation and schools?” he added.

When the Palestinian government announced its plan to provide grants, it gave no details other than that they aim to support the steadfastness of the Palestinians in the tensest areas, in light of Israeli control over the area, which makes up 31% of the West Bank.

The Jordan Valley’s importance for Palestinians is not limited to its geographical area, as it has great strategic and agricultural significance that would be difficult to match should a Palestinian state be established. In addition, it represents Palestine’s food basket, constituting 50% of the total agricultural areas in the West Bank and 60% of the total vegetable output.

Meanwhile, Israel has declared that it would not withdraw from the Jordan Valley under any political settlement. It is imposing aggressive measures to control the entire territory, by turning the areas into military land or nature reserves and then into settlements.

In this context, government spokesman Ibrahim Melhem told Al-Monitor, “The government aims to respond to the plans of Israeli Prime Minister Benjamin Netanyahu and his government to annex the Jordan Valley, and to empower the citizens of the Jordan Valley by strengthening their presence on their land, reclaim it, invest in and protect it.”

He noted that there are no clear mechanisms so far for implementation, but they will be determined according to the residents’ needs and include mainly agricultural grants to encourage work and land reclamation.

“We have a set of development activities and events that will be implemented in parallel with this plan,” Melhem added.

Speaking about the government's expectations for the plan, Melhem noted, “We expect the unemployed and new graduates from the Jordan Valley who can work there to show real interest.”

This is what the government expects, but there is no guarantee that this would be possible.

Mahdi Daraghmeh — not necessarily a direct relative of Khaled Daraghmeh, as the Daraghmeh family is very large — head of al-Maleh and Bedwen area village council, questions this “too little too late” decision.

According to Daraghmeh, there is no land left under Palestinian control or owned by Palestinians to be able to work in; all lands are either closed for military training, turned into nature reserves with access prohibited or settlement outposts that are difficult to approach.

He noted that the government should empower citizens already living in the Jordan Valley so they do not leave. For instance, he said that last winter about 170 families lived in al-Maleh, but currently there are only 30 families due to lack of water and pastures, and the settlers’ control over lands.

“I don't know what the government based its decision on,” he added. “Everyone knows that Palestinians cannot even erect a tent, and if they do, Israel immediately destroys it.”

Daraghmeh demanded from the government more realistic plans to empower Palestinians in the Jordan Valley and to give young people, who are leaving the area, real privileges and not just mere media announcements, by providing the most basic resilience needs such as water and electricity and securing jobs for the Jordan Valley graduates.

Activist Hamza Zbeidat from the town of Zbeidat in the Jordan Valley, who works with the Ma’an Development Center in the valley, told Al-Monitor that the decision had no real value on the ground, without a comprehensive government plan to protect the Jordan Valley, which is Israel’s now.

“What needs to happen in the Jordan Valley today is to preserve what [already] exists, provide the elements of steadfastness to the residents and address the emptying of entire areas of their population, as happened in al-Auja and Jiftlik, the most fertile agricultural areas in the Jordan Valley,” he noted.

Zbeidat said it was important to have a permanent official presence in the Jordan Valley, as happened in the Khan al-Ahmar area with the ongoing protests since September 2018.

Such decisions remain a dead letter for the people of the Jordan Valley so long as they do not see real action on the ground, especially since many a government had made similar promises but none lived up to them.