The Israeli army leaves behind unexploded devices and mines each time it conducts military drills in the Jordan Valley, and prevents local Palestinian forces from performing demining activities. 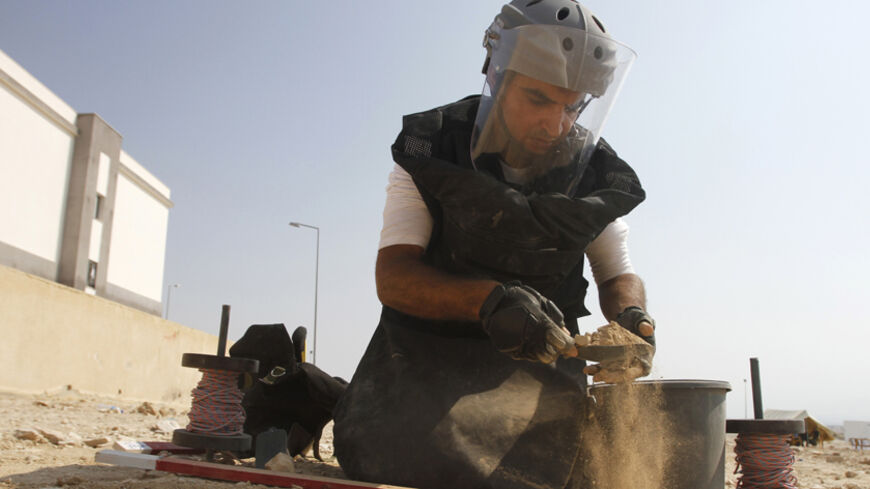 A member of the Palestinian security forces takes part in a training session to find and remove land mines, organized by the Palestinian Ministry of Interior and the United Nations, in the West Bank city of Jericho, June 25, 2012. - REUTERS/Mohamad Torokman

RAMALLAH, West Bank — On Nov. 23, Ahmed al-Sheikh from the village of Bardala in the occupied Jordan Valley, near the Jordan River, was killed by an exploding mine left behind by the Israeli army following military maneuvers in the region. Sheikh was the head a family of five, his youngest son being only 5 years old.

Mahmoud Saleh Sawaftah (Abu Saed), the head of Bardala’s village council in Area C, told Al-Monitor that Sheikh was a shepherd and died of head and chest wounds when the mine detonated while he was trying to bury it, fearing for the safety of the children and other shepherds in the region.

The Israeli army holds periodic military exercises in the Jordan Valley involving the use of warplanes and live ammunition.

Abu Saed said the army has intensified its exercises in the Jordan Valley since the Second Lebanon War in 2006, which affected the lives of many local Palestinians, especially since the army deliberately left unexploded ordnance (UXO) in the region.

With the death of Sheikh, the number of those killed by Israel’s UXOs in the Jordan Valley has reached three since the beginning of 2014. The other two victims were Mohammad Bisharat, 16, who was killed by a mine at the entrance of the town of Tamoun while tending sheep on Aug. 11, and shepherd Sakr Daraghmeh, 17, who was killed on June 21 by a mine in al-Maleh.

Moataz Bisharat, the official in charge of the Jordan Valley’s file in the governorate of Tubas, told Al-Monitor that two civilians were also killed last year by the Israeli occupation’s UXOs.

Bisharat said there were two minefields in the Jordan Valley: the first in the Ain al-Hilweh area, which covered 300 square meters (0.07 acres), and the second in Um al-Riyah, which did not exceed a surface area of 400 square meters (0.10 acres).

He explained that the biggest problem in the Jordan Valley are the UXOs deliberately left between houses and in agricultural fields during military drills, which also cause farming losses. These include tank shells, Energa mortar rounds, land mines planted during maneuvers, unexploded tank shells and even unexploded aircraft missiles.

“Until mid-November 2013, the [Israeli] occupation army handed over about 160 evacuation notices for the population under the pretext of military drills in different areas in the Jordan Valley,” Bisharat said.

Palestinians face difficulties in removing UXOs, since Israel is obstructing the work of competent personnel and preventing them from reaching those areas, not to mention the constant military exercises.

Director of operations in the Ministry of Interior's Palestinian Mine Action Center (PMAC), Lt. Col. Issa Ghneimat, told Al-Monitor that the Israeli occupation hinders the work of the Palestinians trying to remove UXOs, especially since they are located in Area C, which falls under Israeli jurisdiction.

He said the PMAC concluded an agreement with the Halo Trust, the organization for mine clearance, to coordinate with the Israeli army to remove the UXOs from residential areas in Tubas and in the Jordan Valley, in addition to mine clearance in 16 fields across the West Bank.

“The first clearance task is the minefield of 65 dunums [16 acres] in the village of Nabi Ilyas in the Qalqilya district. The problem of explosive war remnants is more complicated than mine action despite its low financial cost,” Ghneimat said.

“The Israeli army deliberately leaves war remnants that the Palestinians can get rid of in one month, even in the military drills zones, but the [Israeli] occupation army is preventing us from working.”

Ghneimat explained that the Palestinian authorities sent letters to Israel demanding it fence military zones, or put up signs to prohibit the entry of shepherds and children and search the relevant zone after the end of the drill, which the Israelis have ignored.

Ghneimat pointed out that the PMAC continuously briefs international bodies such as the United Nations, human rights and legal organizations and mine action donor countries of the latest developments through detailed reports.

Rabih Khendagji, the governor of Tubas, told Al-Monitor that all of the Israeli remnants found in the Jordan Valley are monitored and documented.

“We are working on putting up warning signs in military drill zones that cannot be directly accessed by the Department of Explosive Engineering in the Palestinian police [force],” he said.

Regarding the obstacles preventing the Palestinian Authority from dealing with this issue, Khendagji said, “The dilemma that we face is that the area is not under our control and Israel prevents us from entering it, since it is a military drill area where the [Israeli] occupation army is constantly present.”

With respect to Israel’s objectives, Khendagji said, “The [Israeli] occupation’s policy is based on the Judaization of the land, on displacing the people from the region, restricting their freedom and threatening their lives. Therefore, one may say that the army deliberately leaves explosive remnants while it is supposed to comb and clean the area like all armies in the world after every military drill.”

He noted that some cases were submitted to Israeli courts against the army as a result of these aggressions. “We seek to pursue legal prosecution before international courts,” he said.

At the legal level, Abdullah Abu Eid, a professor of international law and international relations at Bethlehem University, told Al-Monitor that Israel as the occupying power is responsible for any consequences that result from these war remnants and mines, and the International Criminal Court (ICC) cannot examine such cases.

Abu Eid said the ICC does not examine such cases since the preamble and Article 1 of its statute stipulate that the jurisdiction of the court is exceptional and complementary and shall be limited to the most serious crimes, such as genocide, crimes against humanity and war crimes.

He explained that this case can be resolved through political complaints addressed to the UN, human rights organizations and the International Red Cross, and through legal actions instigated by the affected parties before Israeli courts.

With no indication that the Israelis will cease their military operations in the Jordan Valley, it appears that the Palestinians there will remain the prey for UXOs laid by the Israeli army in Palestinian fields and lands.