Gaza's children are most likely to come into contact with unexploded ordnances left by Israeli and Palestinian forces, Mohammed Suliman writes. 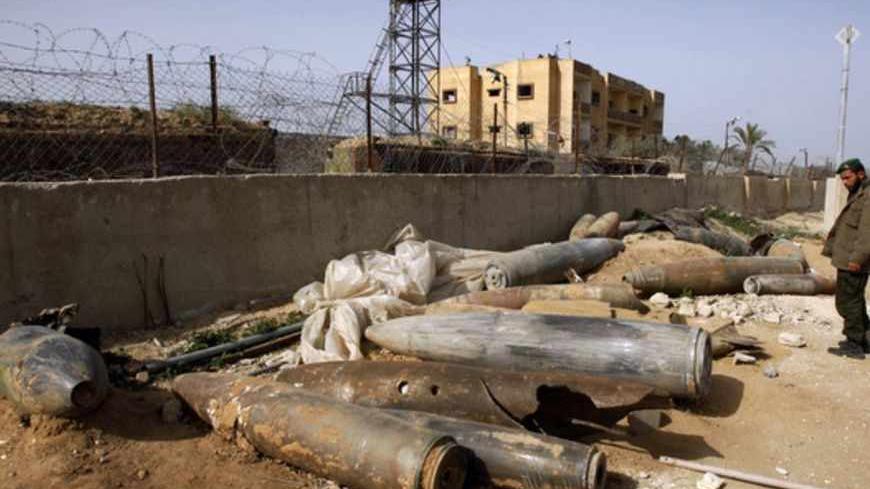 A member of Hamas security forces looks at the remains of spent ammunition and unexploded bombs, fired by Israeli warplanes during Israel's 22-day offensive, in Rafah in the southern Gaza Strip Jan. 26, 2009. - REUTERS/Ibraheem Abu Mustafa

The Landmine and Cluster Munition Monitor mentions that the Israeli-occupied Palestinian territories are "contaminated with mines and explosive remnants of war (ERW). The precise scope, scale and impact of the contamination is not known, but encompasses minefields, military-training zones and areas of confrontation where many explosive devices are left behind.”

The presence of unexploded ordnances (UXOs) continues to pose a high risk to civilians, particularly children, in the Gaza Strip. Following Israel’s 23-day assault on Gaza in 2008-2009, which resulted in more than 1,500 Palestinians killed and over 5,300 injured, the risk of UXOs became significantly higher.

A UN report released back in August 2009 shows than within only six months of the end of the deadly Israeli assault, 12 civilians were killed in UXO incidents, six of whom were children, and another 24 were injured, including four children.

Four years later, such incidents have not ceased. In fact, they have notably increased, following Israel’s second major assault on Gaza in recent years, Operation Pillars of Defense, which took place between Nov. 14 and Nov. 22, 2012.

For instance, on Feb. 12, 2013, three children aging between four and six years were injured by UXOs in Beit Hanoun, north of the Gaza Strip. The three children, Al Mezan Center for Human Rights reports, were playing outside their home when they found a UXO and played with it until it detonated. The explosive device, the human rights center adds, was identified as local and left behind by Palestinian militant groups.

In an interview with Al-Monitor, Lieutenant Colonel Samir El-Najjar, a UXO expert from Gaza working with the government’s police, said that UXO-related civilian casualties increased following Israel’s eight-day aggression on Gaza. He added that most of these incidents involve Israeli explosive devices, which widely contaminated Gaza’s geographic space.

“We at the Mine Action Center are making every possible effort in order to dispose of such explosive devices,” Najjar told Al-Monitor. “There are UXOs, however, which we haven’t been able to locate, and their presence threatens civilians’ lives, particularly children’s, due to the lack of risk awareness.”

According to a report from the Office of the High Commissioner for Human Rights published back in May 2012, “the number of known UXO civilian casualties has steadily increased in the last two years, reaching an average of four per month in 2012 … UNMAS [the United Nations Mine Action Service] data suggests that periods of conflict escalation are followed by a propensity towards a spike of civilians being injured by UXO/ERW.”

Normally, the UNMAS illustrates, such tragic incidents occur when civilians, mostly children, come in contact with unexploded ordnance. This is especially so in access-restricted areas along the separation fence between Gaza and Israel, in addition to residual UXO/ERW left behind in orchards and agricultural lands, as they form the main areas of military confrontation between Palestinian militant groups and Israeli occupation forces.

Najjar added that UXOs vary greatly in their shape and size.

“The heaviest of these devices which we had to deal with were huge bombs of approximately 2,000 pounds (950 kgs). In the aftermath of the last aggression, we detonated 10 bombs of this size, let alone a far greater number of bombs of a less heavy size of roughly 550 pounds (250 kgs). This is in addition to hundreds of phosphorus bombs which were detonated following Israel’s Cast Lead Operation with the help of international mine expert teams,” he said.

However, though there are no statistics available on the proportion of UXO incidents caused by Israeli devices as compared to local ones, a considerable number of these incidents, it appears, have involved devices left behind by Palestinian militant groups.

Children are the most vulnerable group to UXO-related risks, since they are likely to come in contact with such items while playing outside and tamper with them, leading to unfortunate deaths and injuries.

The latest of such UXO/ERW incidents in the Gaza Strip took place only a couple of weeks ago. On March 22, seven Palestinian children aged between seven and 15 years were seriously injured by an explosive device in al-Salam neighborhood in Rafah, south of the Gaza Strip. According to police investigations, the children were playing with what turned out to be an explosive device.

In an earlier incident, on July 7, 2012, four other children sustained injuries as a result of a UXO explosion in Deir El-Balah, east of the Gaza Strip. The children were playing outside their home, located only one kilometer away from the border line with Israel. When the young children — the youngest two years old — stumbled upon the object, they carried it home before it detonated, wounding all four.

According to a UNMAS-Gaza Office report, “[population] groups at high risk from UXO hazards have been identified as children, rubble-removal workers, scrap collectors, construction workers, returnees, farmers and NGO outreach workers. Young boys are especially at risk as they often tamper with UXOs they find while playing outside or collecting scrap.”

One young rubble collector, Hashim Jamus, 15, was critically injured in July 2012 when he came into contact with one such UXO. Al Mezan reported at the time of the incident:

“According to the information available to Al Mezan, at around 9:00 pm on Sunday July 8, 2012, Hashim Abdullah Hashim Jamus (a minor, 15 years old) suffered injuries in various parts of his body while at his home, located in Block 2 of al-Burayj camp. Hashim was hammering a cylindrical object made of old, rusted iron when it began to smoke and then exploded, injuring the youth in his legs, head and left hand. He was taken to Shuhada’ al-Aqsa Hospital in Dayr Al Balah for treatment and [was] admitted to the surgery department.”

In order to tackle the problem, Najjar explained, the government has launched several large-scale awareness campaigns in schools to warn children of the dangers of UXOs and how best to avoid them.