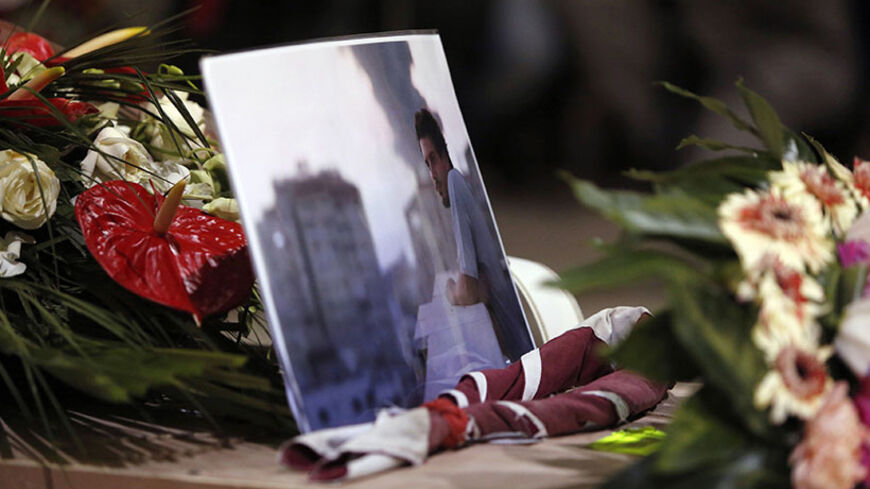 A picture of Associated Press video journalist Simone Camilli, who was killed in an explosion in Gaza, is seen during his funeral ceremony in Tuscany, Aug. 15, 2014. - REUTERS/Riccardo De Luca/Pool

KHAN YUNIS, Gaza Strip — The most violent Israeli war on Gaza did not settle for the destruction and misery that civilians were left to bear. Israel also left unexploded ordnance (UXO) that can detonate with any unwise movement, thus continually killing people as if the war had not ceased.

The explosion of a device in northern Gaza, while Palestinian experts were attempting to disable it on Aug. 13, led to the death of six individuals, including journalists, one of whom was an Italian reporter working for the Associated Press in the Gaza Strip.

Medhat al-Batash, a technical department official for the explosives engineering unit in Gaza, which is affiliated with the Ministry of Interior, said that the UXOs of the current war are more dangerous than in any previous war.

According to several members of the unit, 150 rescue missions were conducted around Gaza during the cease-fire and around 70 missions during the war. These missions were being conducted with extremely limited capabilities, since the unit lacked protective shields, the necessary disabling tools, in addition to the limited number of available explosive ordnance disposal experts.

Al-Monitor discovered there were four international experts from the United Nations Mine Action Service (UNMAS) delegation in Gaza, who had arrived before the current war, and whose main mission was to train the members of the explosives engineering unit on how to deal with the UXOs to protect civilians. However, a member of the internal engineering team confirmed that the UN unit had little participation in the operations that took place on the field during the war.

Palestinian security sources noted that the Israeli army had previously denied UN experts from exceeding level three, out of the five international levels, while training the unit in Gaza. This level is at least higher than the training level in the West Bank, which only reached level two, according to a Palestinian member from the UN team.

Yet, an international expert from the UN team refused to answer our questions concerning the danger of these UXOs.

Al-Monitor visited the police station in Khan Yunis, where all kinds of potentially explosive UXOs were gathered, in addition to different sorts of shrapnel.

The explosives engineering unit in the Ministry of Interior started to disable and destroy all UXOs during the war by gathering and detonating them in empty lands. The team avoided gathering the UXOs in the police station due to continuous Israeli raids. The tough conditions of the war were a major challenge for the team’s mission to protect civilians from explosive devices after police stations and vehicles were targeted.

The head of the training department in the Ministry of Interior in Khan Yunis, Muhammad Mekdad, said, “These UXOs are like ticking bombs. They have an expiration date, but they do not really expire unless they are completely detonated. They are dangerous for anyone who does not handle them correctly.”

According to media and security sources, Khan Yunis underwent two separate incidents, one of which led to the death of a civilian after tampering with one of the UXOs; the other left several children wounded after playing with a suspicious explosive device.

Mekdad estimated that 20% of the explosives launched during Operation Protective Edge have not yet detonated.

In Khan Yunis alone, 1,800 disabling and destroying missions took place during the war.

According to the Israeli army, 4,762 raids were launched over several targets in the Gaza Strip between July 8 and Aug. 5. According to a statement issued by Anatolis about the Israeli army, “The latter had delivered for its operational forces in the Strip 4.8 million bullets during the war for light weapons and shotguns, 43,000 artillery shells and 39,000 tank shells, adding that the army used over 60% of these munitions.”

There were several kinds of UXOs at the police station in Khan Yunis.

Mekdad said, "155 mm artillery shells were mostly gathered," and "the Israeli army has been heavily using artilleries because it did not want to carry out deep incursion using its machines and tanks. The shells had a range of 3 to 6 kilometers [1.8 to 3.7 miles] from their launchpad."

Mekdad added, “The artillery shells were [responsible for] the death of the six individuals, since the bomb was alive, which means it was ready to explode at any touch. Maj. Tayseer al-Hoom, who was martyred in the explosion, was disabling the head, but it exploded within the first seconds of the mission.”

Mekdad showed Al-Monitor the guiding or warning rockets that were found, which were launched by reconnaissance planes when targeting individuals or before blasting houses with other types of rockets.

Mekdad told Al-Monitor, “The most dangerous UXOS that were found were the internationally prohibited weapons of the [Dense Inert Metal Explosive] DIME variety, previously flagged by the Palestinian Ministry of Health.”

He talked about the most used UXOS during the ground operation on the ground, saying, “Carpet System [minefield-breaching, fuel-air explosive] rockets were present at the scene as well, which were used extensively to execute the scorched earth policy. They are launched to secure the entry of the special forces and then they explode at 2 meters [6.5 feet] above ground, sending out [sprays of fuel] at a high temperature and burning everything on the ground. Several different kinds of land mines were also used to destroy the houses on the borders, in addition to luminescent shells.”

On Aug. 18, during a tour of the agricultural neighborhood of al-Zina, east of Khan Yunis, Al-Monitor found some artillery UXOs in homes, agricultural fields and on streets.

Plenty of rockets were also found in gaps in the scorched agricultural fields 500 to 600 meters (550 to 650 yards) away from the border in the al-Khazana village.

Despite all the aforementioned difficulties, the explosives engineering unit is waiting for the war to end to resume its missions across this bordering area.