Syria has been labeled one of the worst countries in the world in terms of the number of mines planted since the war broke out in 2011, with more than 12,000 killed in mine and explosive accidents. 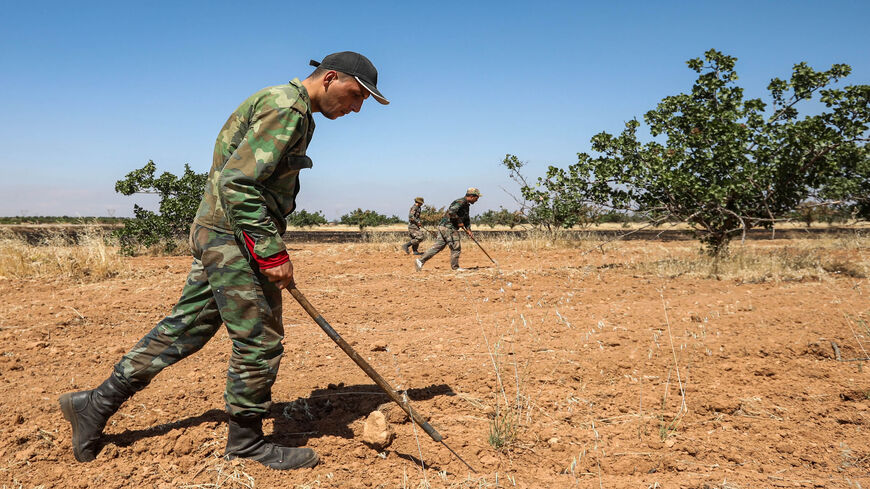 A Syrian army soldier uses a detector to find and clear landmines in a field at a pistachio orchard in the village of Maan, north of Hama, in west-central Syria, June 24, 2020. - Louai Beshara/AFP via Getty Images)

Syria has become one of the worst countries in the world in terms of the number of mines planted since 2011, despite these being prohibited by international law.

According to the United Nations Mine Action Service (UNMAS), the number of victims of mines and explosive ordnance accidents in Syria reached more than 12,000, of whom 35% were killed and 65% injured. Around 25% of the victims were children, while about 50% of survivors suffered limb amputation.

Those mostly in danger of falling victim to mine accidents include farmers, cattle grazers, builders, scrap metal collectors, construction workers, humanitarian workers, children on their way to school, internally displaced persons and those returning to their homes.

In a statement published April 4, the International Committee of the Red Cross (ICRC) said it “is doing its part to reduce the risks to the civilian population living in the vicinity of weapon contaminated areas.”

It continued, “We have so far reached over 300,000 people in 10 out of 14 governorates and will expand to two more in 2021. The ICRC also continues to assist casualties through its physical rehabilitation programs."

In this context, Raed al-Saleh, director of the Syria Civil Defense, told Al-Monitor, “There are still large numbers of ammunition that the regime forces dropped on the opposition-controlled areas, and these pose a threat because they are explosive. Our efforts are focused on getting rid of them, and we have four mine survey teams preparing to visit villages in northern Syria to identify areas contaminated with ammunition and draw and send maps to clearance teams, which, in turn, will get rid of them. There are also six teams specialized in removing unexploded ordnance spread across various Syrian regions and have so far disposed of more than 22,000 various ammunition, including 20,000 cluster bombs. Our teams have another mission, which is to raise awareness about these remnants. Since the beginning of 2020 to date, our teams have held more than 40,000 awareness sessions targeting school students, residents of bombed areas and the displaced in the camps.”

Mohammed Hallaj, director of the Syrian Response Coordination Group, a humanitarian nongovernmental organization (NGO) assisting the displaced in northwestern Syria, told Al-Monitor, “There is a significant shortfall in the work of humanitarian organizations operating across the Syrian regions that have been under the control of various parties, as they [organizations] have failed to raise awareness about the danger of mines and war remnants, especially cluster bombs, let alone how to deal with them. War remnants in destroyed buildings and abandoned areas are more lethal than live weapons as they can explode at any time without prior notice. They represent an obstacle to the return of the displaced to their homes. And despite the fact that the UNMAS is raising awareness about remnants of war and mines with funding from the United Nations, the fact remains that the progress of the project is slow. It may take decades to get rid of mines and remnants of war. Civil society organizations must exert a greater effort to educate civilians about the danger of these mines. Donor countries must allocate part of their donations to establish mine clearance projects and remove the danger threatening nearly 11 million Syrians, approximately 4 million of whom reside in northwestern Syria.”

According to the latest figures of the Syrian Network for Human Rights, which were obtained by Al-Monitor and are not yet published online, at least 2,691 civilians, including 627 children and 288 women, were killed between March 2011 and April 8, 2021, due to hundreds of mine explosions in Syria. Also, 105 victims have been recorded, including 56 children and four women, who died as a result of the explosion of mines left from previous bombings. The network also documented the killing of at least 363 civilians, including 113 children and 31 women, due to the explosion of cluster ammunition from previous attacks.

Meanwhile, according to a report published March 29 by the Justice for Life Organization, a Syrian NGO working to promote the respect of human rights in Syria, the affected groups are unable to work and have had to go with a declining monthly income as they face difficulty moving because of war remnants. Add to this the problems faced by the medical sector and the practically missing job opportunities for this group.

Fadel Abdul Ghani, head of the Syrian Network for Human Rights, told Al-Monitor, “We are a member of UNMAS, and we have issued a special report documenting mine victims throughout the years of the Syrian war. Syria is deemed as the most dangerous country in the modern era given the number of mines used by all the conflicting parties on the ground. This is especially true amid the absence of maps showing the location of these mines and cluster bombs that were used by Russia and the Syrian regime to bomb civilians. Also, once they take control of previously bombed areas, no party in Syria seems to be willing to prioritize a systematic plan to remove mines and war remnants.”

He added, “The northwestern regions of Syria are considered the best in the field of mine action because the Civil Defense teams are working on removing mines, especially in al-Bab after the expulsion of the Islamic State and in Afrin after the departure of the Syrian Democratic Forces. We are continuously calling on all parties to get rid of such remnants. We asked the ICRC for a greater focus on this issue across Syria.”

Mohammed Taha, advocacy officer at Justice for Life, told Al-Monitor, “Our report ‘The High Prices of War’ on the war casualties in Deir ez-Zor was based on a questionnaire that targeted 335 injured, 20% of whom were injured by landmines. The interviews were conducted either with the injured themselves or with their parents. More than 26% of the injured targeted by the questionnaire had lower limb amputation, 14% had upper limb amputation, more than 14% were paraplegic and about 1% were completely paralyzed. Meanwhile, 44% had lost their vision, or had difficulty either walking or moving their upper or lower limbs."

He added, "We believe that the number is much greater, but these are the cases we were able to record. According to the interviews conducted by the organization, more and more people fall prey to mines and war remnants amid waves of displacement on the one hand and waves of return [of the displaced] on the other when the security situation allows for such a return.”