Israel's army drills are razing thousands of acres of the Jordan Valley used by Palestinians for farmland and pastures. 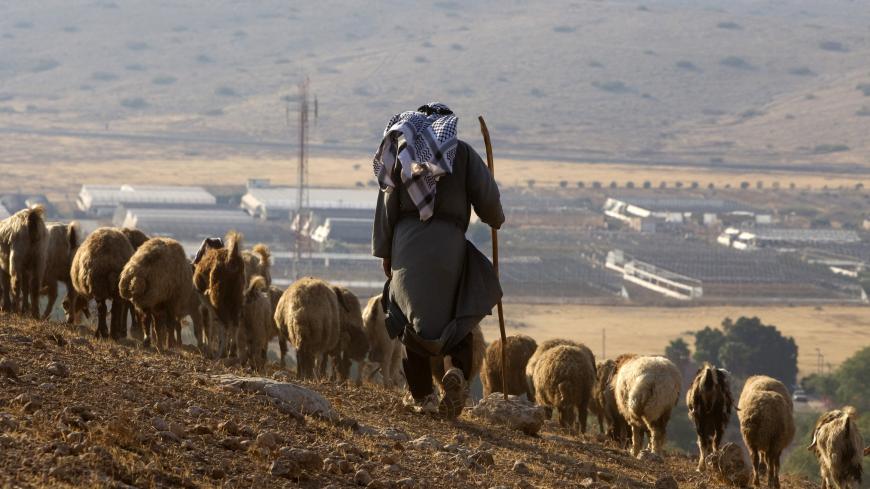 A Palestinian from the herding community of Al-Hadidya in the Jordan Valley, West Bank, Sept. 12, 2011. - REUTERS/Darren Whiteside

RAMALLAH, West Bank — Ahmad Hassan Daraghmeh and his family were preparing to reap chickpeas from their farm when the Israeli army showed up March 8 and destroyed the crops, ostensibly because the soldiers needed to conduct military drills for two weeks.

“After the military dredges were done with sweeping the chickpeas, tracked vehicles and heavy military vehicles raided the land — and then came the infantry," said Daraghmeh, who is from Khirbet al-Farisiya in the northern Jordan Valley. He has worked in agriculture for 30 years and provides for eight family members. Some 12 acres of crops "were completely ruined," he told Al-Monitor.

Daraghmeh now has to work for a farmer in exchange for a daily wage to reduce his losses. “I have incurred 120,000 shekels [$34,000] in losses," he said. Officials at the Tubas governorate's Department of Agriculture, which is affiliated with the Ministry of Agriculture, aren't interested in resolving farmers' losses, he added, though the ministry disputes that claim.

The Israeli army started wide-scale drills March 7 in that part of the West Bank. It evacuated 16 families comprised of 80 members from their houses, saying that the soldiers needed to conduct the drills from 7 a.m. to 6 p.m. daily.

Another farmer in the area, Ibrahim Daraghmeh, also suffered losses because of the drills. He told Al-Monitor, “The military drills destroyed 20 dunams [5 acres] planted with barley and corn, and the Department of Agriculture in Tubas offered no help."

What makes the situation worse for farmers is that they don't even own the land they plant; they rent it from Palestinian families living there.

Aref Daraghmeh, who heads the local council of Al-Maleh and Al-Madareb Bedouin areas, is also a field researcher at the Israeli Information Center for Human Rights in the Occupied Territories (B'Tselem). He told Al-Monitor, “Since the beginning of 2018, the army has destroyed 300 agricultural dunams and more than 10,000 pastoral dunams due to the use of heavy military vehicles in military drills. This is in addition to the damages of military ammunition and remains left by the army in training areas, including missiles and mines, and their negative impact on the land and citizens.”

He and others say the damage is intentional.

“The heavy Israeli vehicles aim at destroying the largest agricultural areas possible during drills. The tanks and armored vehicles make circular movements to kill the crops at their initial growth stage. … Besides, fear and terror haunt Bedouin families and cattle breeders, who don't dare go to the green pastures because of the drills.”

A B’Tselem report published March 2 stated, “The frequent training on pastureland and cultivated farmland reduces the area available to shepherds and destroys crops. Reduced pastureland hurts residents’ livelihoods, as they must buy animal feed as a substitute for natural grazing. Also, farmers cannot reach their crops and tend to them while military exercises are underway, and some crops are trampled by tanks and other armored vehicles.”

Military drills are the main part of the Israeli strategy aimed at expropriating Palestinian lands for residential and agricultural projects for settlers.

Military drills are the main part of the Israeli strategy aimed at expropriating Palestinian lands for residential and agricultural projects for settlers, according to some observers. Jamal al-Amla, director of the Land Research Center, a nonprofit community organization, told Al-Monitor, “Some drills last for a while. Trenches are dug and sand mounds are built to damage crops. Soldier caravans and camps are also set up, and when the damage is done, these camps are turned into settlements. This system led to the expropriation of 55,000 dunams since 1967.”

He added, “The drills cement the control of settlers and Israeli agricultural companies on the Palestinian territories, especially in Tubas and the Jordan Valley, seen as ‘the Palestinian food basket’ thanks to its fertile soil, water resources and convenient climate conditions.”

The "food basket" is comprised of 1,600 square kilometers (618 square miles) — more than one-quarter of the West Bank — and around 44,000 Palestinians live there.

According to a November B’Tselem report, Palestinians can't access 85% of the Jordan Valley. They can't establish any construction or herd their cattle because of the Israeli government's various pretexts, such as declaring the area state property, a natural reserve or a military zone. Palestinians can only access isolated areas surrounded by training regions, settlements or reserves, where they can't build or make any developments.

Farmers accused the official parties of neglecting them, but Aoude denied such allegations, saying, “The Ministry of Agriculture and agricultural organizations support farmers. The ministry started in March implementing the first stage of the European project to help farmers who incurred losses because of Israel. The first phase of the project includes 28 farmers and grants them financial aid in the form of agricultural projects." Some 600 farmers had documented damages, she added.

Aoude noted that each farmer who has suffered damages chooses an agricultural project with a value equal to the amount of damage. The project of the Ministry of Agriculture, along with the Palestinian Agricultural Disaster, Risk Reduction and Insurance Fund, will secure 65% of the project value.

However, the project won't protect farmers from future damage.

Ongoing Israeli control over Area C will continue to harm agricultural land. For Palestinians, the area is doomed because of the lack of development and growth.

The land Ahmad Daraghmeh rents has faced intermittent damage since he began planting 30 years ago. But he plants again each time, as he will do this time.