Why is the Jordan Valley so important to Israel?

Palestinians in the Jordan Valley face daily incursions and land grabs by the Israeli army and settlers, actions that aim to reinforce Israel's policy of maintaining control over the valley at any cost. 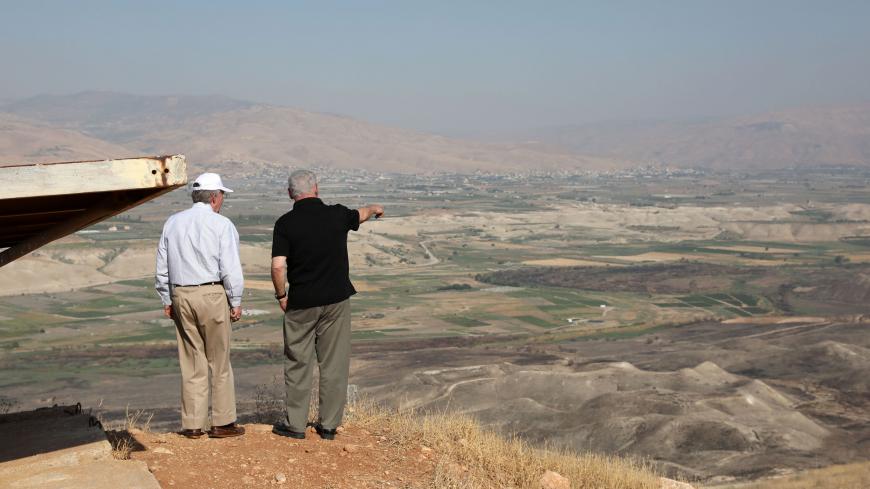 RAMALLAH, West Bank — For no apparent reason, the Israeli army seized a water network July 3 in the northern Jordan Valley. The network used to irrigate 30 acres of land planted with grapes in the village of al-Jiftlik. The land is owned by Palestinian farmer Nail Bani Odeh, and the attack is an example of the daily Israeli incursions that affect residents of the northern Jordan Valley, their agricultural land, their places of residence and their livestock.

Such attacks are carried out by both the Israeli army and the settlers. Fawzi Daraghmeh, a 47-year-old resident of Khirbet Samra in the Jordan Valley, cannot take action against a settler whose livestock has been grazing his land for weeks.

“The army and settlers attack us on an almost daily basis," he told Al-Monitor. "A settler brought dozens of cows onto the 50 acres of land that I own after I harvested wheat, completely destroying the crop. The settler is making his cows graze my land in an attempt to stop me from entering my land, which they eventually want to take over.”

He continued, “I provide for my family by breeding sheep and working in agriculture, but the settlers and the army would do anything and everything to push us out of our land. They have even taken up our work on our own land.”

Ahmed Hassan Daraghmeh, 55, is another Palestinian farmer from the al-Maleh area. He faced a similar scenario in May, when bulldozers and military tanks destroyed 30 acres of his land on which had grown barley.

“They scraped the land, destroyed the crop and turned everything into piles of dirt,” he told Al-Monitor.

Aref Daraghmeh, who monitors settlement activity in the Jordan Valley and lives in the al-Maleh area, told Al-Monitor, “The Israeli authorities and settlers have been increasingly seizing lands in recent years under various pretexts that include declaring closed military zones or classifying them as nature reserves.”

In this vein, Prime Minister Benjamin Netanyahu is working to take advantage of the current US administration to get a green light for the control of many areas in the West Bank, most notably the Jordan Valley. He organized a trip to the Jordan Valley for US national security adviser John Bolton on June 23.

Bolton responded positively, saying, “US President Donald Trump will take into account the concerns expressed very clearly over the years as we go forward with this,” in reference to the importance of the Jordan Valley for Israeli security.

Israel claims it needs to control the Jordan Valley because the area sits on its eastern border. Should it give it up, weapons could be smuggled from Jordan into the Palestinian territories. Such smuggling took place in the 1960s and 1970s, as Palestinian factions would send suicide bombers to the occupied territory to carry out operations there.

In response to Netanyahu, the Palestinian Foreign Ministry said in a press statement June 24 that “Netanyahu’s clinging to the Jordan Valley and refusal to withdraw … is further evidence of the failure of the US economic project.”

The ministry was referring to Israel's settlement project, which does not allow the Palestinians to control, invest or develop their own resources, and this is contrary to the US economic project, which the US administration said is aimed at economic prosperity.

The statement added, “Netanyahu has given the Palestinians sufficient reason to reject the US-Israeli plot aiming at quashing the Palestinian cause and undermining any chance of establishing a Palestinian state with the occupied East Jerusalem as its capital. This is the real meaning behind Netanyahu’s refusal to withdraw from the Jordan Valley.”

Residents of the Jordan Valley view Netanyahu's statements as a true expression of the policy and actions being carried out by the Israeli authorities against them.

“We have been facing oppression since 1967 on the part of successive Israeli governments, which have been stealing the Jordan Valley from us and imposing their control on it," Ahmed Hassan said. "Every government resumes the work of the previous one in an attempt to empty the land of its inhabitants.”

He noted, “I was born here and I belong to this land, which is our only source of livelihood. Israel has taken over our water, natural resources and land, and if this continues, we will not be able to return to our lands.”

The total area of the Jordan Valley is 720,000 acres, with 50,000 Palestinians living in 27 permanent residential units, along with dozens of pastoral and Bedouin communities.

The head of the Colonization and Wall Resistance Commission, Walid Assaf, told Al-Monitor, “Israel is not only trying to control the Jordan Valley, but all of Palestine, because it does not see any possibility of establishing a Palestinian state. It believes that annexing the Jordan Valley would eliminate such a possibility.”

During his visit with Bolton, Netanyahu reiterated his commitment to never give up the Jordan Valley in any peace agreement with the Palestinians. Before winning the April 9 elections, he said he intends to annex parts of the West Bank. All this means that the state the Palestinians hope to establish based on the 1967 borders is more elusive than ever.