The Jordan Valley, once considered Palestine’s most fertile area, has been taken over by Israeli settlers who have barred Palestinians from using the land. 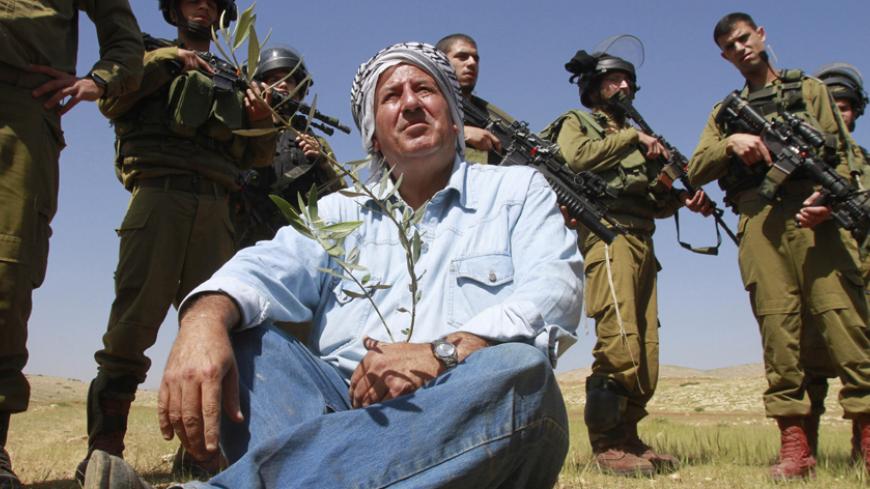 Israeli soldiers stand guard as a Palestinian farmer sits on the ground after planting olive trees during a protest against what Palestinians say is land confiscation for Jewish settlements in the Jordan Valley, a hotly contested part of the occupied West Bank, April 8, 2014. - REUTERS/Abed Omar Qusini

Israeli occupation forces prevented dozens of Palestinian farmers last Dec. 9 from cultivating tens of thousands of acres of their land in Khirbet Ain al-Sakut, in the northern Jordan Valley in the West Bank. Israel declared the region a closed military zone, as it has with several other regions in the Jordan Valley, such as the Wadi al-Maleh village.

The governor of the Tubas governorate in the northeastern West Bank, Rabih al-Khandakji, told Al-Monitor: “The region of al-Sakut has been classified as a closed military zone and a mine zone since its occupation in 1967. Yet, after the mines were removed, farmers tried to cultivate the land, since they have documents confirming they own it. However, the settlers prevented them from doing this. Later, the Israeli army intervened and declared it a closed military zone for Palestinians, but it is still open to settlers to farm and steal its waters.”

The same scenario has been repeated in other parts of the Jordan Valley. The area is prized by Israel, whose economic exploitation of it brings in millions of dollars annually. Meanwhile, Palestinians are banned from the region and not allowed to benefit from its resources under security pretexts. The region is classified not only as a closed military zone, but also as a military training camp and sometimes as minefields.

The Jordan Valley is considered the “breadbasket” of Palestine because of its fertile soil, water resources and suitable climatic conditions. Located in the eastern West Bank, it extends 68.5 km (42.5 miles) from Jericho in the south to Tubas in the north, and 24 km (15 miles) from the shores of the Dead Sea in the east to the western hills of Tubas and Jericho in the west. It covers an area of 1,600 square km (618 square miles), equivalent to one fourth the total area of the West Bank, and is home to about 57,000 Palestinians.

According to data from B’Tselem, until 2013 Israel had established in the Jordan Valley and northern Dead Sea region 39 settlement outposts — nine of which are unlicensed — housing nearly 11,000 settlers.

B’Tselem notes that Palestinians are banned from using 85.2% of the Jordan Valley and northern Dead Sea regions. They are forbidden from residing, building or grazing livestock in these areas under a number of pretexts, such as parts of it being declared “state land,” military regions or nature reserves. Meanwhile, the portions open to Palestinians are divided into isolated areas separated by military training zones, settlements or nature reserves, preventing Palestinians from developing the land.

Walid Assaf, the chairman of the Commission Against the Wall and Settlements and the former minister of agriculture, told Al-Monitor: “After the occupation of the West Bank in 1967, Israel declared the Jordan Valley to be closed military regions. It destroyed 78 water wells, expelled residents and confiscated their land, transforming the area into settlements that make use of the existing natural resources for agricultural and industrial production.”

He added: “Israel resorts to many methods to control the land and expel residents from it, such as depriving these areas of basic services like electricity, well digging and water, as well as banning the construction of schools and hospitals and continuing to destroy [some 230] residential communities that it refuses to license. It adopts a policy of issuing orders to evacuate and confiscate land, declares closed military zones, confiscates sheep, cattle, bulldozers and tractors and imposes heavy fines on citizens.”

The World Bank report further noted that Area C contains the majority of the West Bank’s natural resources, and the removal of Israeli restrictions and allowing for development of businesses in the area would benefit the Palestinian economy, adding as much as 35% to the Palestinian GDP.

Azmi Abdul Rahman, the director-general for economic policy in the Ministry of Economy, told Al-Monitor that according to the Ministry of Economy’s reports: “The loss incurred by Palestinians as a result of not being able to take advantage of Area C amounts to more than $5 billion per year. About $800 million is lost by the agricultural sector along the border with Jordan, since Israel controls 60% of Area C, while the remaining 85% of the loss comes from confiscation of water.”

He pointed out that in the past the agricultural sector contributed to more than 15% of GDP, but today its contribution has fallen to less than 5%.

Samir Abdullah, the general director of the Palestine Economic Policy Research Institute-MAS, told Al-Monitor that the nature of the Jordan Valley — with its fertile land, abundant water and favorable climate — makes it the biggest natural greenhouse on Earth. He added that farmers' ability to produce three crops there per year, as well as its fertility, makes the occupation eager to control it.

“The economic importance of the Jordan Valley is not limited to agriculture alone. Israel also benefits from water sources and exploiting the Dead Sea, in terms of extracting types of salt that are rare globally. It also benefits from the Valley in terms of tourism, and [the region] could lift the Palestinian economy if it was under the control of the Palestinian Authority,” he said.

The Jordan Valley and Area C comprise two pillars of the authority’s plans to establish a state from the economic, geographic and political perspectives. Without these regions, it will not be able to establish a state that has economic resources, enabling it to progress with economic development and ensure national sovereignty.