Will the PA be able to invest in Area C?

Palestinian Prime Minister Rami Hamdallah demanded that the Palestinian Authority be allowed to invest in Area C, considering it a way to achieve development, create jobs and increase the Palestinians' GDP. 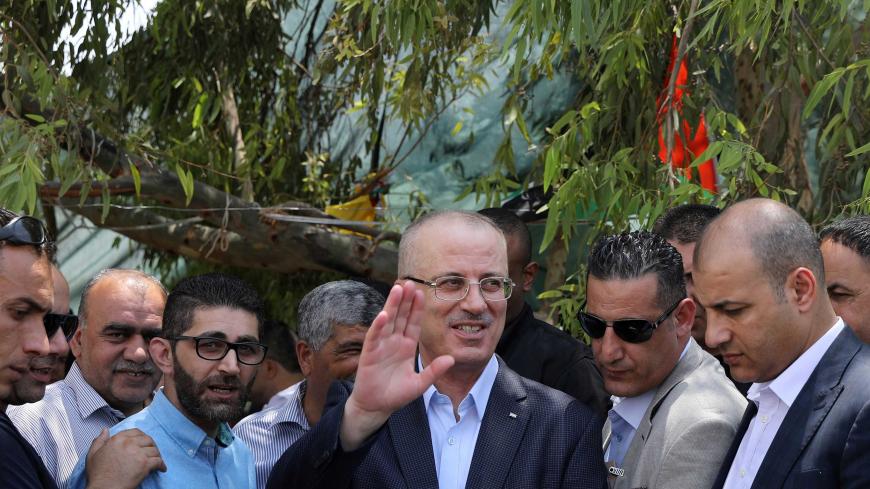 Hamdallah briefed the Council of Ministers on Oct. 2 in Ramallah on the outcome of the Sept. 26-27 meetings of the Ad Hoc Liaison Committee — which coordinates development aid to Palestinians — held at UN headquarters in New York. The official Wafa news agency quoted him as saying, “We will be able to count on ourselves and depend less on donors when the PA is enabled to invest in Area C.”

The deputy economy minister, Manal Farhan, told Al-Monitor, “Urban sprawl and population growth continue to lead to less and less land in Areas A and B, which is why Palestinians need investment and agriculture [projects] in Area C. In this regard, genuine international pressure is required to force Israel to approve investments in our occupied land.”

She said Area C is part of the Palestinian territories occupied in 1967, and pointed out that UN resolutions, particularly Security Council Resolution 242, call for Israeli withdrawal from those territories.

Farhan said Palestinians in Area C live under worsening living conditions due to lack of development. Villages in Area C are lacking in water supply networks, with 70% of Palestinians there mainly depending on rainwater in the winter and water tanks in the summer. The lack of investment in Area C has meant that the majority of Palestinians there work in the agriculture and livestock grazing sectors or find jobs inside Israel, she added.

Farhan said PA investment plans for Area C are built upon boosting cooperation with Palestinian nongovernmental organizations, promoting partnership with donors to provide additional services in the health and education sectors and developing the infrastructure to have access to natural resources.

The Planning and Administrative Development Ministry and the Economy Ministry “have in hand dozens of plans and investment projects in Area C. These include setting up factories for the white stone that Palestinian mountains there are rich in, and tourist attractions in the Dead Sea for travelers seeking both leisure and therapy. There are also plans to set up big agricultural projects in the Jordan Valley, which is famous for its abundant water and fertile soil. These projects can meet the Palestinians’ need for food without having to rely on food aid,” Farhan said.

She said these investments would create thousands of jobs for Palestinians and increase GDP by 35%.

The Israeli Information Center for Human Rights in the Occupied Territories, B'Tselem, said in a report dated Nov. 11, 2017, “In the West Bank, the potential for urban, agricultural and economic development remains in Area C,” considering the Palestinian population concentrations in Area A and Area B.

The report said Israel is taking advantage of its control over the planning and construction sectors in Area C to prevent Palestinian residents from building infrastructure in that area “by designating large swaths of land as state land,” “firing zones” or “nature reserves” and “by allocating land to settlements.”

In late 2016, the Civil Administration provided data, upon the request of the Israeli nonprofit Bimkom (Planners for Planning Rights), showing that 53 building permits in Area C were granted out of the 1,253 Palestinian applications in the last three years. Meanwhile, the Civil Administration issued more than 2,000 demolition orders of Palestinian buildings in Area C during the same time.

Khalil Tufakji, director of the Maps and Survey Department at the Orient House in Jerusalem, told Al-Monitor, “In parallel to the Israeli bans that prevent Palestinians from using their land in Area C for agriculture, construction or investment [purposes], the Israeli settlements’ policy in said area is based on the privatization of large parcels to build its own settlements and factories and have agricultural fields, based on a well-organized and developed structural planning.”

Arab 48 reported that the Land Research Center of the Arab Studies Society said Sept. 13 that Israeli settlements and outposts in the Palestinian territories occupied in 1967 increased from 144 before Oslo to 515.

Tufakji said Israeli policy is a clear indicator that Israel is unwilling to surrender Area C and seeks to annex it to the state of Israel. “Based on that, the possibility that Israel will enable the Palestinian government to make investments and build facilities and allow urban expansion in Area C is ruled out.”

Nasr Abdel Karim, an economics professor at Birzeit University, told Al-Monitor. “The best solution in order for Palestinians to rely on themselves is to invest in Area C, in light of the foreign aid cuts to the PA.”

He said that while the natural resources and necessary land to achieve Palestinian economic development are available in Area C, 68% of it has been allocated for Israeli settlements.

Abdel Karim and Tufakji agreed that it is difficult for Palestinian investment projects to take place in Area C without Israeli consent, even if they were to be funded by the EU. This is because Israel previously demolished facilities funded by the EU in Area C and has not been held accountable at the international level.

Tufakji said Israel “seeks to plunder and drain Palestinian resources in Area C. It is drawing down underground water in this area, supplying the settlements and even Israeli cities with it, while preserving the Israeli underground water reserve inside the Green Line.” He said Israel also “set up dozens of quarries in this area with the goal of excavating stones and producing gravel to set up settlements or even other [buildings] within Israeli cities.”

A 2016 report issued by the Euro-Mediterranean Human Rights Monitor said Israel had demolished more than 120 EU-funded facilities in the West Bank in the first three months of that year.

In October 2017, Belgium, France, Spain, Sweden, Luxembourg, Italy, Ireland and Denmark demanded that Israel pay 30,000 euros ($35,000) in compensation for the Israeli demolition of facilities and infrastructure these countries had built for Palestinians in Area C. Israel, however, declined, saying the European activity in Area C was illegal and was conducted without being coordinated with Israel.

Abdel Karim said political and economic independence is required for any development in Area C, which indicates that sustainable Palestinian development there can only be brought about when the Israeli occupation is over and illegal settlements in the West Bank are demolished in accordance with international law.