The EU giveth, Israel taketh away in West Bank 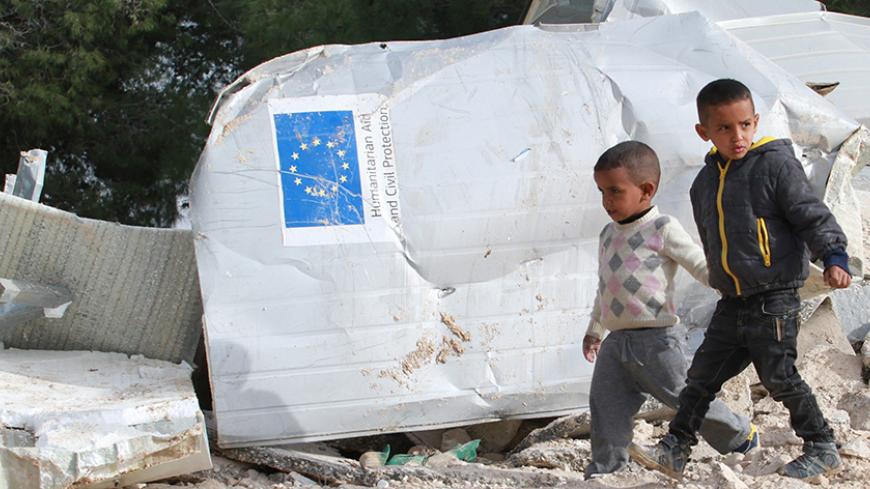 Palestinian boys walk past the remains of their family's dwelling, which was funded by EU humanitarian aid, after it was demolished by Israeli forces, Al-Eizariya, West Bank, Jan. 21, 2016. - REUTERS/Abdelrahman Younis

RAMALLAH, West Bank — Palestinians are calling for the European Union to put its muscle where its money is by increasing pressure on Israel to stop destroying EU-funded facilities. Israel is preparing legislation to forbid EU states from aiding Palestinian building projects in the West Bank's Area C.

The aid the EU gives Palestinians in Area C often ends up wasted. Despite the EU's long-running complaints that Israel's settlements are illegal, not much has been done about it, as the abuses continue. In some recent examples, inhabited EU-funded facilities north of Jericho were destroyed Dec. 6, and on Dec. 7, solar panels and electrical appliances were confiscated from Hebron and farms were destroyed in the village of Nabi Samwil, northwest of Jerusalem. All these locations are in Area C.

The destruction sparked the anger of EU delegations in Jerusalem and Ramallah, and they voiced their ire in a Dec. 13 press statement that read, “Since early 2016, Israel has destroyed around 866 facilities funded by the EU and affected the lives of 5,704 Palestinians, including 1,221 who have become homeless and 586 children. It has cost the EU around 536,000 euros [$558,096].”

Area C, which covers more than 60% of the West Bank, is under Israel’s administrative and security control under the Oslo Accord signed on Sept. 13, 1993. About 150,000 Palestinians currently reside in Area C.

EU media official Shadi Othman told Al-Monitor, “The European aid, whether humanitarian or developmental, is directed to Area C in order to maintain the Palestinian presence there and keep the two-state solution viable. Depriving Palestinians of their existence and conducting [Israeli] construction and development works in these areas is the biggest challenge for this solution.”

Israel claims it is demolishing houses that were built without permits in Area C. But Israel is in charge of issuing such permits.

“The EU has been asking Israel during its meetings to change its policies in these areas and to agree to structural planning of compounds in Area C, thus allowing permits for the development of facilities and houses and to stop the demolition," Othman said.

He added, "The EU, along with Palestinian ministries, is contributing to preparing structural maps of compounds in Area C, as this is the first step to solve the problem of destroying facilities. The EU is using this issue to pressure Israel to more quickly approve these maps. The EU is constantly asking Israel to respect its aid and projects in Area C to fulfill the basic needs of citizens.”

Structural maps determine the type of land used in each compound, whether it is designated agricultural, for construction or nature reserve. Permits are supposed to be granted accordingly. But Israel cites the absence of such maps as justification for not granting construction permits and continuing the demolition.

On Nov. 2, Palestinian Minister of Local Government Hussein al-Araj and Ralph Tarraf, an EU representative in Jerusalem, launched a series of social infrastructure projects in Area C with EU funding to develop the region and provide services to 300 Palestinian families. The projects include the expansion and rehabilitation of a water-supply system and the construction of a kindergarten with a playground.

Othman said the EU will continue working in Area C.

"In the past two years, development aid worth 15 million euros [$15.6 million] was offered, as well as humanitarian aid worth 11 million euros [$11.4 million]. In the coming phase, we will keep implementing projects and offering aid based on the EU’s political vision of the two-state solution," he said.

The undersecretary of the Ministry of Local Government, Mohammad al-Jabarin, told Al-Monitor, “The Palestinian government places a lot of importance on Area C by offering it basic and infrastructural services through its ministries. It pairs with international partners like the EU to fund development and humanitarian projects in Area C. The EU must defend the projects it funds.”

Area C is mostly agricultural land, rich in natural resources that Palestinians say Israel exploits for the benefit of settlements. Israel has increased settlement construction in this area and restricted some of it for military training. It forbids the architectural planning of Palestinian compounds and construction on the land and restricts basic services for Palestinians there like water and power.

"The EU funds projects because it realizes that Area C is marginalized and needs basic services and infrastructure. But donors and world countries must pressure Israel to stop abusing these projects through expropriating them or demolishing them," Jabarin said.

He noted that in the past few years, the Palestinian government has presented Israel with more than 100 structural maps of compounds in Area C, but Israel approved only four. He said that Israel’s intention to impede any development plan or any natural extension of one is clear.

Walid Assaf, the chairman of the Palestinian Authority's Commission Against the Wall and Settlements, told Al-Monitor, “European aid is important for the support and resilience of Palestinians in Area C. But it is not enough. … Israel must face international pressure from the EU and the United Nations to halt its demolition policy.”

On Dec. 23, a majority of the UN Security Council voted in favor of Resolution 2334, which condemns Israeli settlements and demands they be halted in the occupied Palestinian territories. PA spokesman Nabil Abu Rudeina said in a statement that day that the resolution constitutes “a huge blow for Israeli politics, an international condemnation of settlements and strong support for the two-state solution.”

Although the EU did not comment on the UN Security Council’s decision, its stance regarding settlements is known. On Dec. 9, High Representative of the European Union for Foreign Affairs and Security Policy Federica Mogherini said in a press statement that Israel is seeking to legitimize settlements in the West Bank and called that effort a “violation of Israeli and international laws through expropriating Palestinians’ rights of ownership."

She said, "Israeli settlements are illegal as per international law and constitute a hurdle to the peace process and the two-state solution."

Assaf said, “Israel will not stop its policy in Area C if it is not punished and does not face real pressure that affects its interests.”

He noted, “International aid is keeping the flame of hope for the two-state solution burning in Palestinians’ hearts. But Israeli policies [of] expropriating lands, building settlements, demolishing facilities and forbidding the establishment of projects in Area C are killing this hope.”

Assaf said international aid for Area C is insignificant compared with the billions of shekels Israel spends to develop settlement projects in the area. This imbalance calls for a serious stance and action plan from international parties, he added. The demolition of EU-supported facilities and projects in the West Bank has long angered the EU and pushed it to explore the possibility of prosecuting Israel and demanding that it pay compensation.

On Nov. 7, Israel's Yisrael Beitenu party announced it was preparing a bill to submit to the Israeli Knesset to forbid EU states from helping Palestinians with Area C construction operations. The bill has not been submitted yet, but Oded Forer, a Knesset member for the party, said the plan is justified. “The European [support] for Palestinian building operations in Area C makes it difficult for concerned parties in Israel to destroy the buildings that are constructed without permits," he said.

Although the EU reaffirmed its commitment to the two-state solution in a Dec. 20 statement by Mogherini, Palestinians believe the EU can and should exert more effective pressure on Israel.