The Palestinian Authority turned to the local tribal justice system to settle a conflict with the Arab al-Jahalin tribe after the Palestinian police killed one of its members, leaning on the local elders to restore and keep the peace. 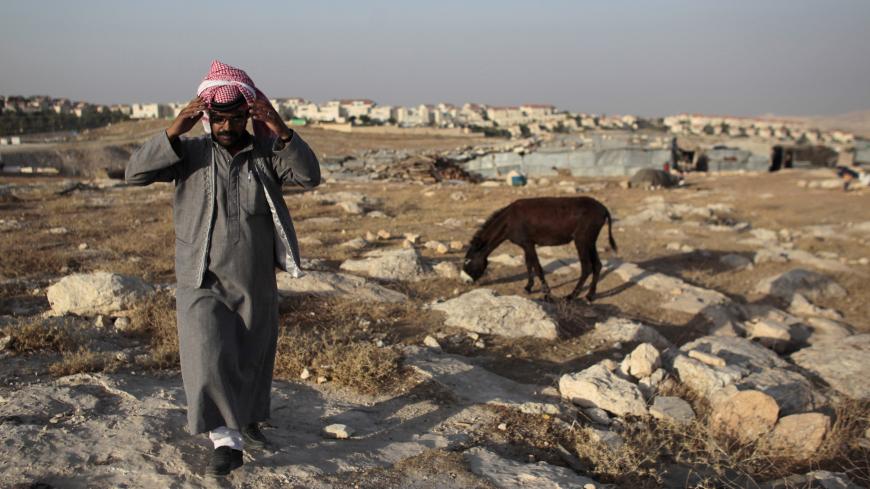 A member of the Arab al-Jahalin tribe walks in his encampment near the Jewish settlement of Maale Adumim (in the background), east of Jerusalem, June 16, 2012. - REUTERS/Ammar Awad

RAMALLAH, West Bank — The Palestinian Authority, represented by a delegation headed by Fatah Central Committee member Abbas Zaki, agreed on a six-month temporary truce with the Arab al-Jahalin Bedouin tribe on Aug. 11. The agreement comes on the backdrop of the Aug. 9 killing of Ibrahim Audi al-Jahalin in the Arab al-Jahalin village outside al-Eizariya in East Jerusalem. Investigations into the incident are expected to be completed during the truce.

Tensions started when the PA customs police raided the Bedouin communities in the Judean desert on Aug. 9. They destroyed fuel stations in al-Eizariya that the PA claims are illegal as they lack permits and sell smuggled and low-grade diesel. PA forces chased diesel smugglers and opened fire, killing one young man. His death triggered a series of clashes between the tribe and the security forces.

The statement asserted that the PA’s customs police stormed al-Eizariya, destroyed a fuel station and headed for the village of Arab al-Jahalin. “Members of the security forces raided homes and violated and insulted their inhabitants. … Verbal altercations between the inhabitants and the forces soon escalated. The security forces opened fire and threw tear gas,” the statement added.

It noted, “The victim was shot in the head as he stepped outside his house to see what was going on.”

The temporary truce agreement called for the PA to form a committee of inquiry into the death. The agreement proclaimed the young man a martyr and called for the withdrawal of Palestinian customs police from the vicinity of the Bedouin community and for the Jahalin tribe's fighters to return to their village after opening the road, which hat had remained closed since the incident.

Fatah Central Committee member Abbas Zaki told Al-Monitor that the commission of inquiry has begun work, saying, “The PA wants to complete the investigation" and "prevent the recurrence of these events in the future.”

He explained that the PA headed to Arab al-Jahalin to preserve civil peace and contain the rising tension, and that the young man had been killed by mistake. “The PA considered the victim a martyr since he was killed unjustly. The PA will honor him and honor his family, … regardless of the results of the investigation.”

That the PA opted for tribal law to resolve the crisis has raised questions about the power of the tribal judiciary, a system that is deeply entrenched in Palestine and was employed before the advent of the PA to power under the 1993 Oslo Accord.

Since its establishment, the PA has found it difficult to abolish the tribal judiciary, and therefore it sought to institutionalize it. In November 1994, late President Yasser Arafat established the Tribal Affairs Department affiliated with the Office of the President. In 2005, the Tribal Affairs Department was attached to the Ministry of Interior.

“Inherent and well-recognized tribal traditions were the cornerstone of judicial authority in Palestine before the establishment of the PA and its judicial system,” Zaki said. “This is why Fatah and the PA decided to turn to tribal law to resolve this dispute. …Tribal law still applies in Palestine to resolve community disputes and to preserve the Palestinian social fabric.” He added, "We offered our deepest condolences in the name of President Mahmoud Abbas and Prime Minister Rami Hamdallah to the family of the victim."

With more than 5,000 members, the Arab al-Jahalin tribe is one of the largest Bedouin tribes in Palestine. Its members are distributed in the Judean desert, with some 3,000 in the village that was raided near al-Eizariya. The rest is dispersed over several areas, notably Khan al-Ahmar, where they faced an Israeli demolition order in May. But after an appeal lodged, Israel's Supreme Court temporarily halted the demolition.

Tribal spokesman Abu Imad Jahalin praised the PA for dealing with this issue and containing the crisis by concluding a temporary truce agreement. He explained to Al-Monitor, “Before the establishment of PA, the Palestinian society was governed by the tribal law. When the PA and its institutions took over, the tribal means of settlement of dispute remained [and were] faster than the regular court system when it comes to issuing rulings, addressing differences and fulfilling rights.”

He went on, “The tribal law proved its usefulness in containing the crisis with the PA. The tribal elders obliged the youth of the tribe to abide by the temporary truce with the PA.”

The director of the Jerusalem Legal Aid and Human Rights Center, Issam Aruri, told Al-Monitor that this case is far from the first such incident, warning, “The fact that the legitimate authority opted for such a method of settlement of disputes is a dangerous indicator that goes against the PA’s desire to become a state.”

Aruri went on, “The killing of the young Jahalin tribe member is unjustified, as using live ammunition against citizens is not permitted. The customs police made a mistake and is now trying to fix it with another mistake by resorting to tribal law. This weakens the citizens’ trust in the Palestinian judiciary.”

He added, “The tribal judicial system is still strong but with the establishment of state institutions, the regular judiciary and the rule of law should take over. The tribal law is unjust in some cases. It is based on considerations different from those of the state’s law.”

The tribal law does often contradict civil law in several ways. “There is no correlation between them, especially since the tribal law is not stable, as it varies according to the balance of power,” Aruri said. “Tribal judges believe that might makes right. If the victim was not from a strong tribe, the PA would not have considered turning to tribal justice.”

Numerous local Fatah members are from the Arab al-Jahalin tribe.

However, in light of the difficulties that still impede the regular judicial system, such as delays and case backlogs, a tribal judicial system that is capable of quickly resolving complicated cases is unlikely to see its presence wane in Palestine.