Europe threatens to put pressure on settlements with product labeling 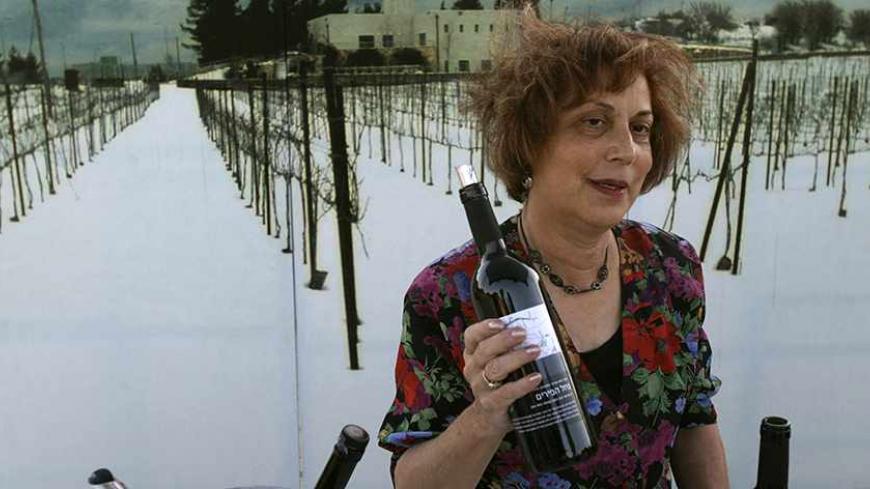 A representative from the Gush Etzion winery in the West Bank holds a bottle of red wine, Jerusalem, Aug. 5, 2009. - REUTERS/Baz Ratner

It's symbolic that the official credential presentation ceremony of EU Ambassador Lars Faaborg-Andersen to Israeli President Shimon Peres, which had been scheduled for Dec. 16, was delayed because of the snowstorm. The head of the EU delegation had landed in Israel in the early autumn, to a cloudy climate between Brussels and Jerusalem.

The rift between the EU and Israel over the settlement policy has further deepened on the backdrop of the sharp criticism of Israeli Prime Minister Benjamin Netanyahu against the role that the EU mission and the three European countries played in the negotiations with Iran in Geneva.

The veteran Danish civil servant didn’t need to take special driving lessons to find his way in the bumpy road called the "peace process." At the beginning of the 21st century, when Denmark held the presidency of the EU, Faaborg-Andersen served as the director of the Foreign Ministry’s Middle East and North Africa Department in Copenhagen, and was a co-author of the Quartet's “Road Map.” More than 10 years after this document was adopted unanimously by the UN Security Council [and even anchored in Resolution 1515], he finds himself almost at the same spot.

On Dec. 17, when the headlines focused on a crisis in the negotiations over the issue of Israeli military presence in the Jordan Valley, I found Faaborg-Andersen cautiously optimistic. "Yes," he confirms, "the United States has put a security proposal on the table, quite favorable to the points of view held by the Israeli government, insisting for instance on an Israeli military presence on the Jordanian border for a certain period of time." One the other hand, he shows zero tolerance for settlement activity. "We will increase political pressure to go ahead with the labeling" (of the products made in the settlements), says the ambassador.

Al-Monitor: Do you think that Prime Minister Benjamin Netanyahu's demand for Israeli troops' presence along the Jordan Valley contradicts Gen. James L. Jones' proposal, following the Annapolis 2007 conference — a proposal which was based on a third party's deployment in this area?

Faaborg-Andersen: Gen. James L. Jones' proposal could not suit the region any more, and must be revised. It was designed before the Arab Spring changed the Middle East. No one really knows today what will happen in Jordan. Therefore, I understand the wish of the Israeli government to have a hand on what is going on in the border area. The security issue is a central one for the current Israeli government. It is obviously one of the areas in which Israel will demand the most. Therefore, this issue will be one of the most difficult areas for the Palestinians to accept. But the key notion is that the Palestinians accept the idea that any Israeli withdrawal from the West Bank will be gradual. So there is a reason to be moderately optimistic. From my point of view security should not be an endgame issue. At the end, both parties are to gain from a serious security proposal. The idea seems to be that on the basis of this generous proposal vis-a-vis the Israelis, it would be perhaps possible to elicit some flexibility from the Israelis on other issues of key concern to the Palestinians, such as the '67 borders and land swaps.

Borders will be the key. It stands therefore to reason that these two issues will be pursued and forwarded in parallel.

Al-Monitor: The next turning point might be the release of Palestinian prisoners. The EU has warned Israel to abstain from announcing this time around new construction projects in the settlements, parallel to the release.

Faaborg-Andersen: The EU believes that this is a unique moment for a breakthrough in the peace process. There is a strong US administration and a strong secretary of state. The EU on its part is ready to support the process in every possible way, saying that if a solution should be found we are already ready to take our relationships — both with Israel and Palestine — several steps higher, through a so-called privileged relationship. It means the expansion of trade opportunities, collaboration in research, culture and security matters. It would have no precedent.

But at the same time we urge both parties to refrain from any unilateral action that could undermine the cause. In that context, I made it very clear that a new substantial settlement announcement around Dec. 29 [the date set for the third phase of the prisoner release], as we have seen now two times previously during the first and second release phases of prisoners, could potentially be very damaging and could derail the process. In such a case, we have warned that the responsibility for the damage would be put squarely on the doorstep of Israel. It is a message that has been communicated very clearly by me and also by a number of my colleagues in the EU.

Al-Monitor: Do you see the compromise which allows Israel to participate in the 2020 Horizon R&D project despite EU settlement guidelines as a positive step?

Faaborg-Andersen: This Israeli acceptance that no euro will be spent in the settlements is important because the EU would like to expand its collaboration with Israel in all the areas that have nothing to do with the occupation. The EU will be increasingly critical on the issues of occupation and settlements. There will be a tightening of our policy in this area. We will also increase political pressure to go ahead with the labeling of the settlements products in all EU member states.

Al-Monitor: Do you see any linkage between the negotiations with the Palestinians and the Geneva deal with the Iranians?

Faaborg-Andersen: Both issues pose a threat to Israel's security. I believe that by solving the conflict with the Palestinians Israel would give Iran one less argument to demonize Israel. The EU believes that if the conflict goes unsolved, it will make it harder to realign with moderate Arab states. The Arab peace initiative is one of the strongest incentives for Israel to move ahead with the diplomatic process. The conflict between Sunnis and Shiites in the region could go on for a very long time. But Israel is not part of this conflict and by solving the conflict with the Palestinians, Israel could extricate itself from this turmoil and not be the rallying part for all those frustrations.

Al-Monitor: If the US initiative fails, will the whole donation mechanism to the Palestinian Authority [PA] be revised and the burden shifted to Israel?

Faaborg-Andersen: The EU spends 500 million euro [$684 million] collectively per year in the PA. We have heavily invested in the state-building project. That gives a bit of a say about what happens in the PA, such as Israeli demolitions in areas in which we have invested. As well as restriction of movement and access which make it difficult to create the economic environment that is necessary for the Palestinians to create a viable economy. Several studies made by the World Bank show that even little extra access by Palestinians to the West Bank could add hundreds of millions of dollars to their GDP, money that we would not have to pay to support the PA. In the long run, if the establishment of a Palestinian state turns out to be illusionary, it is fair to expect a donor fatigue. This would leave the PA in a very difficult situation. The PA has a $350 million deficit in its budget, and the financial contributions from Arab states have been dwindling during the last years because of the regional tensions. It is correct to assume that this could endanger the viability of the PA and that it will have a direct impact on Israel. It is a genuine concern.