Netanyahu plans to 'punish' the Europeans over settlement labeling

Prime Minister Benjamin Netanyahu's announcement that Israel will distance the European Union from the diplomatic process makes no sense, in view of the ongoing diplomatic stalemate. 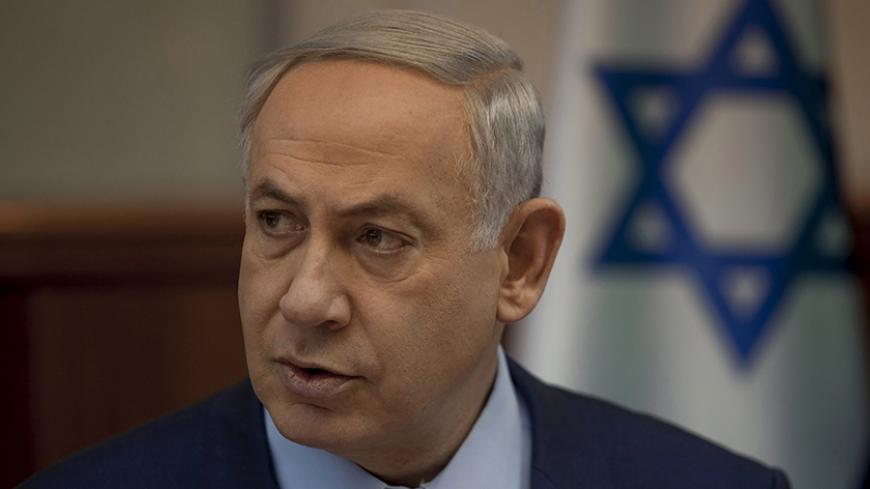 The Israeli Foreign Ministry spokesperson announced on Nov. 29 that Prime Minister and Foreign Minister Benjamin Netanyahu had ordered a “reassessment” of the extent to which Israel will enable European Union involvement in issues relating to the diplomatic process with the Palestinians. The move followed the reprimand ("Demarche") delivered by the Foreign Ministry two weeks ago to the EU’s ambassador to Israel, Lars Faaborg-Andersen, over the EU’s decision to label products manufactured in the settlements and marketed in its member states. At that same meeting to which he was summoned, Faaborg-Andersen was informed that Israel had decided to cancel a series of diplomatic consultations that had been planned for the coming weeks between the sides.

On reading this reaction, it is hard to decide whether to cry or simply take offense. To cry, because an attempt by a small state in the Middle East to punish Europe for a decision supported by 16 European foreign ministers and overwhelmingly adopted by the European Parliament (by a vote of 525 to 70) brings to mind the miserable fellow who cut off his nose to spite his face. Also to cry, because the decision to keep the EU away from a “peace process with the Palestinians” is akin to a decision to distance Europe from a diplomatic process between Israel and Syria. Both these processes are equally far-fetched. To take offense, because the reactions to the decision illustrate the politicians’ contempt for Israelis’ reading comprehension. The man who presumes to lead them assumes they cannot tell the difference between boycotting products and labels specifying where they are made.

“Punishing” the Europeans by keeping them away from the “peace process” strips them of the chance to share with the United States the wilted laurels of negotiations on achieving a two-state solution. How can one punish someone by banishing them from a show that has been deprogrammed? What’s more, is participation in the peace process a reward for good behavior or a contribution to efforts to extricate Israel from a bloody conflict? Will the “sanctions” imposed by Israel on the EU advance Israel’s existential interests or those of Europe, of saving Israel's democratic and Jewish character?

Rescinding the EU’s entry permit to the diplomatic process could remind Europe that it has for years been paying an exorbitant price for standing room tickets on the balcony. Even during supposedly better times, when US Secretary of State John Kerry was shuttling between Jerusalem and Ramallah, the EU’s main contribution to the process was paying the salaries of the subcontractors employed by the Israel Defense Forces and the Shin Bet internal security agency — those usually known as “members of the security apparatus of the Palestinian Authority.” Even after his decision to depose the EU from the diplomatic process, Netanyahu will not object that the European taxpayers continue to foot the bill of the PA. If they don’t pay, the Israeli taxpayers will be forced to fork over the money. That was the case until late Prime Minister Yitzhak Rabin signed the Oslo Accord in 1993 — the agreement against which Netanyahu has declared war.

The Foreign Ministry announcement called the decision to label settlement products “a discriminatory step.” Indeed, the EU discriminates between the settlement town of Ariel and the Israeli town of Kfar Saba, but it was only following the example set by successive Israeli governments. Since occupying the territories almost 50 years ago, they have all avoided granting the settlements equal status to the towns located within state lines. Even the current government, the most right wing of them all, has not annexed the West Bank. Obviously, as long as the State of Israel does not recognize the settlements as part of the State of Israel, no other country can do so. Since the Ariel industrial park has not been annexed to the State of Israel, labeling products manufactured there as “made in Israel” would be an act of deception, including self-deception.

According to the announcement, the product labeling decision is strongly suggestive of a boycott. And what was suggested by the Sharon government’s 2003 decision to label settlement products in the customs' paperwork in order to distinguish them from Israeli products eligible for lower European customs tariffs? One has to keep in mind that the European Neighborhood Policy has been contributing for over a decade to trade between Israel and the EU thanks to these customs benefits. Netanyahu, the one who was a senior member (as finance minister and as a member of the security Cabinet) of that same government, is now saying the EU should be ashamed of its decision, which enables the European consumer to buy Israeli products without supporting the occupation. Is he not ashamed? This has nothing to do with a boycott of Israel and not even of the settlements. The US administration adopted the European position that the decision is purely technical and not political. One should add — at least for now.

Experts at the Institute for National Strategic Studies, former Israeli Ambassador to the EU Oded Eran, professor Eran Yashiv and Nitzan Feldman, warn that although the macroeconomic implications of the product labeling are insignificant, the decision indicates willingness to adopt harsher moves. They contend that the European view of business activity in the settlements as illegitimate could provide an impetus for steps against Israeli companies operating within the boundaries of the green line, that also do business in Judea and Samaria. If Israel does not stop the snowball that started out as a technical move, it could develop into an economic, cultural and academic boycott. Banks and pension funds in Europe have already disinvested from Israeli banks (such as Denmark’s biggest bank, Danske Bank, and the largest pension fund in the Netherlands, PGGM). What started out as a boycott of the Ariel College led two weeks ago to a decision by the American Anthropological Association to impose a boycott on all academic institutions in Israel.

Absent true willingness to confront the roots of the crisis with the EU, settlement policy and the diplomatic stalemate, the Israeli government is turning, joyfully, from being an occupier to being a victim, from accused to accuser, from being punished to punishing others. What a small joy.