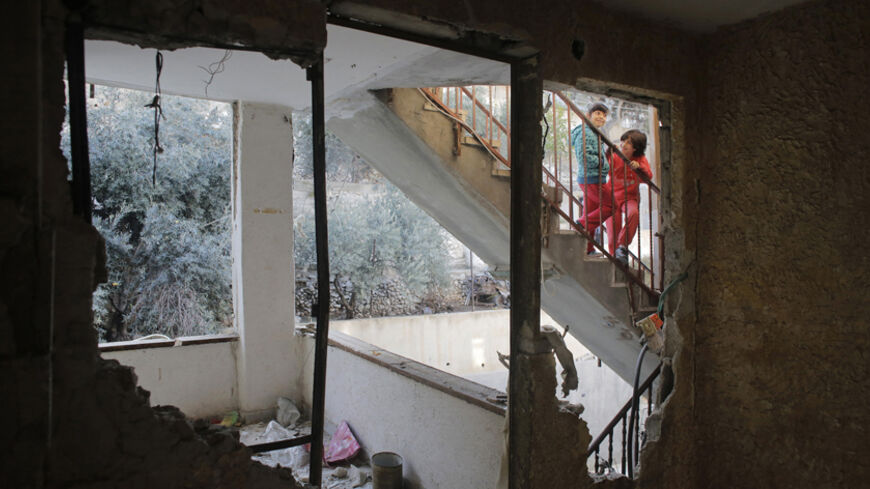 Palestinian girls, relatives of Abdel-Rahman Shaloudi, stand on a staircase near his destroyed home in the East Jerusalem neighborhood of Silwan, Nov. 19, 2014. - REUTERS/Ammar Awad 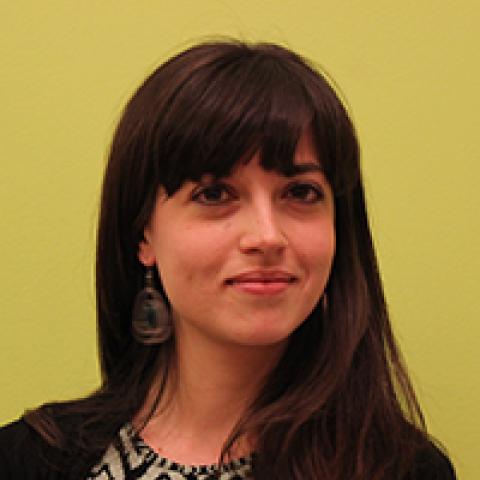 JERUSALEM — “This was the kitchen, over here was my daughter’s room, and this was the room Muataz used to share with his brother,” Shadyaa Hijazi said, as we stand in her emptied family home in Abu Tor, East Jerusalem. The Hijazis were issued a demolition order on Nov. 19 and moved all their belongings and furniture to another apartment in the same building, owned by their extended family. Two decorative streamers hanging from the ceiling in one of the bedrooms look odd in the otherwise empty space.

A month ago, Muataz Hijazi was accused of the attempted murder of right-wing activist Yehuda Glick. A few hours later, he was shot dead by police on the roof of his home. The family has always denied he was responsible for the attack. “Even if he was, they should have proved it in court. Instead, they shot him 20 times,” Ibrahim Hijazi, his father, said in an interview with Al-Monitor. Muataz had spent 11½ years in prison for arson and for attacking a prison guard, with long spells in solitary confinement.

The demolition order came a day after a synagogue attack in the West Jerusalem neighborhood of Har Nof had left five Israelis and two Palestinian assailants dead. In an address to the public, Israel’s Prime Minister Benjamin Netanyahu ordered the demolition of the homes of those responsible for this and other recent attacks. Three families were issued demolition orders, and the family home of Abdel Rahman al-Shaludi, responsible for a car attack in which a woman and a three-month-old baby were killed, was demolished on the night of Nov. 19 in Silwan, East Jerusalem.

The families are given 48 hours to appeal to the regional command of the Israel Defence Forces and another 48 hours to take it to Israel’s Supreme Court, should the former be rejected. But Ibrahim has little faith in the appeal process.

“The decision has already been taken,” he said. “We have lawyers all over the place. But the courts in Israel take any judgement toward Arabs based on politics, not on justice.”

The family is already looking for an apartment to rent in East Jerusalem; in the meantime, they are staying with other family members who live nearby.

According to the Israeli government, the measure should serve to deter further terror attacks.

The demolitions are based on Regulation 119 of the Defense (Emergency) Regulations of 1945, enacted during the British Mandate. The practice was discontinued in 1998 only to be resumed after the second intifada broke out in 2000. According to data published by Israeli human rights organization B’Tselem, 664 homes were demolished from October 2001 until the end of 2004, leaving 4,182 people who had not been charged with any crime homeless, many of them children.

In February 2005, a military commission of inquiry was appointed to look into the issue. At the time, the military establishment not only concluded that there was no proof that the practice was an effective deterrent against terrorism, but also called into question its legality and legitimacy.

EU states and human rights groups including Human Rights Watch have called on the Israeli government to halt the practice, which they say amounts to collective punishment, a war crime under international humanitarian law. B’Tselem argues the policy constitutes a punitive measure rather than a deterrent, and that irrespective of effectiveness “it contravenes basic moral standards by punishing people for the misdeeds of others.”

Furthermore, it is applied unilaterally only when the attacker is a Palestinian. The practice was revived this summer, when the West Bank homes of the men accused of kidnapping and killing three teenage Yeshiva students were destroyed or sealed. However, the Israeli families of those responsible for the murder of Mohammed Abu Khdeir, the 16-year-old East Jerusalemite who was burnt alive, never faced the same fate.

This summer, Israeli human rights organization Hamoked filed a petition in which they argued that the practice is discriminatory. The verdict states that the murder of Abu Khdeir was an “extremely exceptional case” and that the petitioners had not presented enough proof of selective enforcement as opposed to enforcement based on “pertinent considerations.”

Since the cycle of violence began in the summer, 11 Israeli civilians and members of the security forces lost their lives as a result of attacks, and at least 17 Palestinians were killed. Incidents of hate crimes such as the firebombing of a Palestinian home in Khirbet Abu Falah on Nov. 23 have become an everyday occurrence in both Israel and the West Bank.

“If they demolish, there will be more violence. When someone hits you, what do you do?” Shadyaa said.

Concrete blockades restrict access to Abu Tor’s main road and have sparked demonstrations in the past week. Tensions have intensified in East Jerusalem in recent months, following the murder of Abu Khdeir and the introduction of access restrictions to Al Aqsa Mosque. According to OCHA's June-August humanitarian bulletin, nearly 800 of the 2,200 Palestinians arrested over the summer were from Jerusalem; Jerusalemites made up nearly half of the over 3,000 Palestinians injured in the West Bank during this time. Add to this pre-existing grievances about settlement expansion and administrative home demolitions, and you get the picture of a city at boiling point.

“We are not the first and we won’t be the last,” Ibrahim said, pointing out that many East Jerusalemites are affected by home demolitions every year. In 2013 alone, 301 people including 176 minors were left homeless in East Jerusalem because their homes were built without permits, which are near impossible to obtain. “There’s no justice for us. And now the punishment goes to the whole community. But when my son was killed, thousands of people came for me.”