Israel has been destroying the houses of the Palestinians who carried out armed attacks against Israelis to deter others from doing the same, but the families' friends and neighbors are reacting with even greater determination to rebuild. 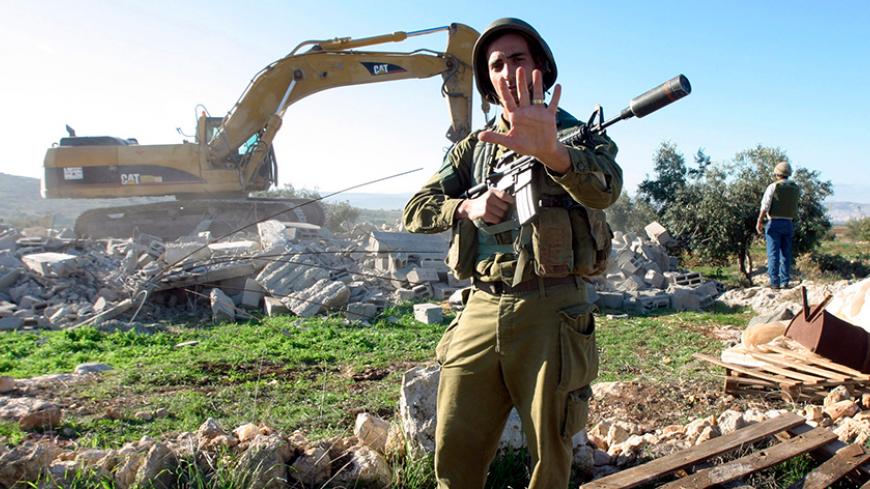 An Israeli soldier gestures as a bulldozer demolishes two Palestinian houses in the West Bank village of Arabuna near Jenin, Nov. 28, 2006. - REUTERS/Mohamad Torokman

GAZA CITY, Gaza Strip — As part of a campaign to counter the Israeli government policy of destroying the homes of those who carry out terror attacks, Palestinians are contributing to fundraisers to rebuild houses destroyed since the Oct. 1 outbreak of the unrest in Jerusalem.

Hassan Khreisheh, second deputy speaker of the Palestinian Legislative Council, believes the fundraising demonstrates the popular social solidarity among citizens. The people felt they had to step up because the PA and other factions have failed to provide financial and political support for the ongoing uprising and have been unable to protect those affected by the Israeli practices, he said.

“The PA’s position regarding the intifada is still unclear. It is still acting neutrally without actually adopting the intifada or the will of the Palestinian people, which ultimately pushed political and social activists to take the initiative,” Khreisheh told Al-Monitor.

Although Israel hopes the demolition policy will help end the current Palestinian unrest, Khreisheh finds that result unlikely, saying, “These repressive actions can only bring further hate among Palestinians toward the occupation, making way for revenge to be sought.”

Palestinian activists began raising funds in defiance of the demolition policy after Israeli forces blew up the house of Ibrahim Akkari in the Shuafat refugee camp Dec. 2 in Jerusalem. Ahmed Abu Hamdan, an activist leading the campaign to rebuild Akkari’s home, told Al-Monitor the destruction displaced Akkari's family of six.

On Nov. 5, Akkari ran over and killed an Israeli soldier while injuring about a dozen other people near the light rail station in Jerusalem, after which Israeli soldiers shot him dead.

“Since there is no deterrent to stop Israel from carrying out such unethical and illegal actions, the Shuafat refugee camp leaders and other notables met immediately after the bombing of Akkari’s home and decided to create a fundraising campaign — [one of] the largest in decades — to rebuild these houses," said Abu Hamdan.

The fundraiser's organizers were surprised by the number of people who responded and decided to include more houses in the reconstruction effort, Abu Hamdan said.

Amira Akkari, Ibrahim’s wife, considers the fundraising “a new victory defying the occupation’s policies.” She noted that the escalation of attacks by Israeli settlers against Palestinians — particularly the July 31 burning of the Dawabsha family in their sleep inside their Nablus home — was her husband's motivation for running over the soldier.

“Once the Israeli forces demolished our home, a citizen offered us a house to live in. Popular efforts then began to rebuild the house, as dozens of young men came to help remove the rubble. People began to collect donations to rebuild it, and are now working nonstop on its reconstruction,” she told Al-Monitor.

“Why don’t the Israeli authorities demolish the homes of those who kill Palestinians, such as the settlers who murdered and burned the child Mohammed Abu Khdeir in Jerusalem in July 2014, and those responsible for the burning of the Dawabsha family in Nablus?" she asked. "Aren’t Palestinians human beings as well?”

After the success of the Akkari fundraising campaign, activists in Nablus created a similar effort Dec. 6 to replace four houses the Israeli military demolished there Nov. 13. Those houses belonged to the families of the perpetrators of the Oct. 1 shooting near the Itamar settlement east of the city, an incident that resulted in the death of two Israelis.

Activist Myassar Atyani revealed the Nablus campaign collected the equivalent of about 1 million shekels (about $260,000) by Dec. 15.

“This amount includes financial and in-kind donations, including construction materials, electronics and household furnishings. We are now in the process of finding and furnishing permanent alternative homes for these families, since we cannot rebuild their former homes as the occupation confiscated them before demolishing them,” Atyani told Al-Monitor.

“Not only the rich donated; donations were made by all types of Palestinian people and even children, as well as poor sanitation workers. Everyone donated in order to replace these homes,” she added.

Mohammad Zagha, 12, sold coffee after school in Nablus to raise money. A photo of the Palestinian child putting the money in a donation box went viral on social media sites.

Atyani called on the Palestinian Authority to play its part in providing financial and social support, especially after Israel notified three other families Dec. 16 that it was going to demolish their houses in Bethlehem.

Israel first began enforcing the demolition policy when it occupied the West Bank and the Gaza Strip in 1967, as a collective punishment against the families of those carrying out attacks against Israeli targets, to deter other Palestinians from conducting similar operations.

B'Tselem, the Israeli Information Center for Human Rights in the Occupied Territories, noted in a report published in September that Israel demolished 664 Palestinian homes in the West Bank and East Jerusalem between October 2001 and the end of 2004, before deciding to stop enforcing the policy in 2005.

According to B’Tselem, the Israeli military resumed the demolitions in June 2014 after three Israeli settlers were kidnapped in Hebron, destroying four houses and sealing another one in the West Bank and Jerusalem in 2014.