Why Israel must protect Abbas

Palestinian President Mahmoud Abbas has ordered his security apparatus to prevent escalation and continue cooperation with Israel, but it is uncertain how long he can hold off the desperate Palestinian street. 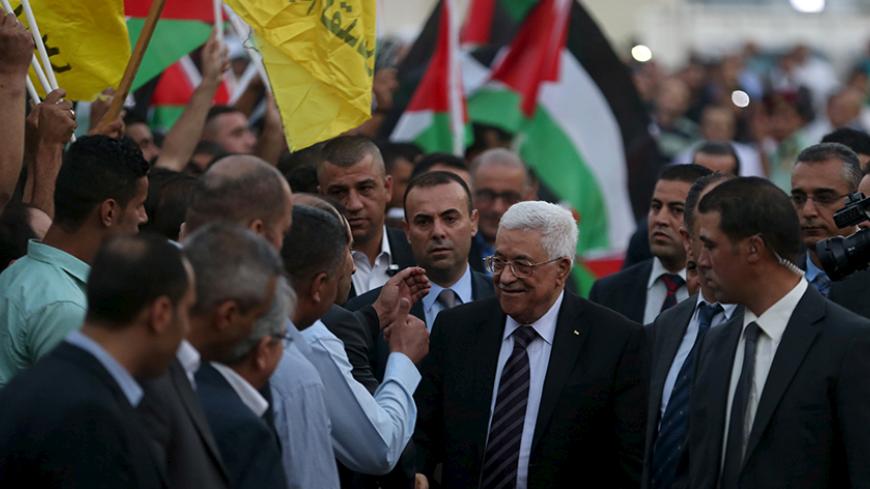 Shortly after returning to Israel from his US visit, Prime Minister Benjamin Netanyahu called an urgent security meeting at his Tel Aviv office to address the recent wave of violence in Israel and the ways to combat it. The heads of the defense establishment were required to answer whether the Palestinians were organizing in large numbers for an intifada or if this is another short spike in terror, similar to the one that took place in Jerusalem at the end of 2014 against the backdrop of tensions at the Temple Mount.

A temporary spike in violence or a full-blown intifada call for two entirely different postures as well as responses. An all-out confrontation — an intifada — would mean declaring war on the Palestinian Authority (PA). It would also mean applying sanctions that could potentially bring about its collapse and dissolution. By contrast, operatively coping with a specific wave of violence — however intense and deadly — actually calls for continued cooperation with the PA, including closer security coordination.

For many months, the Israeli defense establishment addressed various escalation scenarios vis-a-vis the PA. Detailed operational plans in the event of an all-out armed conflict were drawn up. A broad military campaign engulfing the entire Palestinian population in the territories would force the Israel Defense Forces (IDF) and Shin Bet to prepare differently, compared to the limited measures they would take in the event of a transient spike.

A senior official who attended the discussion at the prime minister’s office told Al-Monitor on condition of anonymity that the security forum estimated that a full-blown intifada in the West Bank was not brewing. Rather, this is a limited wave of violence that is fueled by PA-endorsed incitement.

This topic of incitement is a recurring motif from the Israeli political establishment after every attack. But despite pointing a finger at PA President Mahmoud Abbas, the leaders of the Israeli defense establishment, including the chief of staff and Shin Bet director, know that he is the one who will call the shots in this crisis and decide how it will evolve. It is up to him to decide whether the situation will deteriorate into an intifada. And by the same token, it is up to him to stop the escalation in its tracks and restore quiet. Both sides know full well that a large-scale armed conflict is unlikely to take place as long as Abbas openly acts to prevent it.

Ever since he was elected president of the PA, Abbas has spoken and acted very differently from his predecessor, Palestine Liberation Organization Chairman Yasser Arafat. Even if the latter did not mastermind the second intifada — contrary to the charges of some Israeli officials — he nevertheless did almost nothing to stop it. He felt comfortable during the intifada to resume his position as a general leading his people into confrontation with Israel. He also enjoyed playing the victim during the turbulent days when Israeli tanks laid siege on the Muqata, the PLO headquarters in Ramallah. His favorite slogan was that “a million shahids,” or martyrs, would descend on Jerusalem. It sought to rally the last of the believers to join the armed national conflict.

By contrast, Abbas — despite being acutely aware of the criticism leveled against him of collaborating with Israel — has not stopped security coordination, nipping in the bud any signs of a violent uprising. Unlike his predecessor, he has never diverted from the policy he established right at the outset of his presidency: A resounding no to an armed conflict with Israel, but an equally resounding yes to a diplomatic and popular struggle. Abbas has not abandoned his policy even during this recent escalation.

Almost concurrent with the security forum that Netanyahu convened in Tel Aviv, Abbas summoned the leaders of his security agencies to his office in Ramallah, instructing them to avoid confrontations with the IDF. The president recommended they do everything they could to ward off escalation that would result in deterioration and loss of control. The first important operational step to avert such a scene was the deployment of Palestinian policing forces — in coordination with Israel — to stop young people from throwing stones at roadblocks or holding large demonstrations.

A Palestinian security source told Al-Monitor on condition of anonymity that a protest is a legitimate and even desirable response to what he considers to be Israeli provocations. But, he added, it will be allowed to take place only in a limited scope, provided it can be guaranteed not to snowball. The same source also noted that the decision has been made to arrest Hamas and Islamic Jihad militants suspected of plotting attacks against Israel. The source refused, however, to answer the question of whether the arrest of the Hamas cell that shot and killed Naama and Eitam Henkin near the settlement of Itamar in the West Bank Oct. 1 was carried out in collaboration with the PA.

The five cell members were arrested a day after the attack in an operation by the IDF's Duvdevan undercover unit, together with the Yamam police counterterrorism unit and the Shin Bet. “Although these are Hamas militants,” the source said, “we believe that this was a cell that was organized locally rather than something that was put together by the chief organization.” Mohand Halabi, who on Oct. 3 stabbed to death Aharon Bennett and Rabbi Nehemia Lavie, apparently also operated on his own with no formal guidance or outside resources.

Israel’s security forces are finding it hard to nab these lone independent assailants before they mount their attacks. The only way to combat such violence is by restoring quiet. And this is precisely the opposite of what the Israeli right is asking the prime minister to do now. Thousands of right-wingers took part in a demonstration organized by the Samaria Regional Council outside the prime minister’s residence, clamoring to restore security. Some of Netanyahu’s ministers who addressed the participants called on him to “vanquish this wave of terror in the most appropriate Jewish way” — that is to say, by expanding the settlements.

However, if Israel wants to curb this wave of violence — whether perpetrated by lone assailants or terror cells — it must act with restraint and bring calm. Israeli security officials and their PA counterparts agree that the causes of the tension between Israel and the Palestinians are mainly frustration, despair, disappointment, economic distress and unemployment, as well as anger at the expansion of the settlements and at the diplomatic deadlock. But — they contend — what motivated the recent assailants above all was the unrest at the Temple Mount. Further construction in the settlements will only aggravate the situation.

Meanwhile, it seems Israel has taken reasonable and proportionate measures. If it wants to prevent a broad uprising, Israel must protect Abbas. He is the one making sure right now that the violence does not spiral out of control. How long can he hold out? How long can he stand his ground against everyone else? This also depends on how much discretion and wisdom Israel exercises in its future steps.