Is The Third Intifada Already Here?

Hamas seeks to heat up the flame of a third Intifada, but are the Fatah leaders interested in another round of violence, wonders Shlomi Eldar. 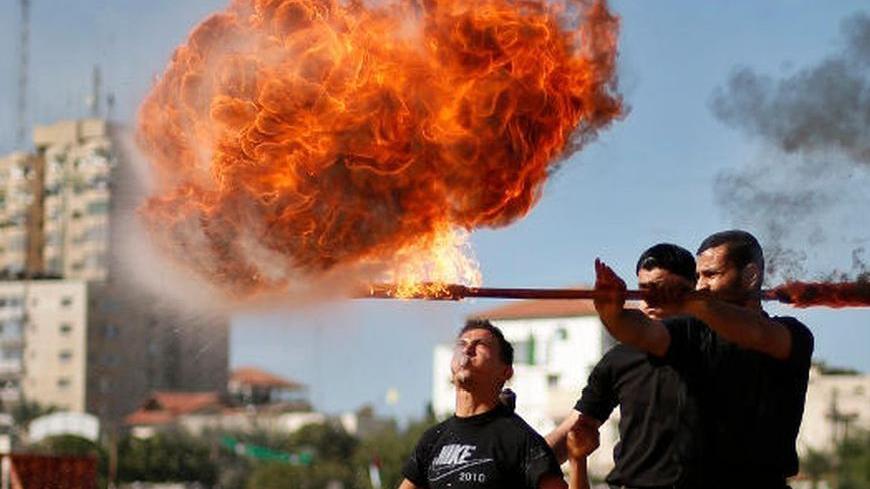 The third intifada is here already. When people talk about it as a fait accompli, charting its course and voicing warnings that it will be more violent, brutal and destructive than its precursors, the conclusion is that it is already here, waiting for one tiny signal in order to burst.

"The mother of all intifadas" is alive and kicking; it's frightening and ominous - but only on paper.

On the front pages of the press, in magazine reports and television broadcasts, pundits compete between themselves who can predict the precise date of its outbreak. They're trying to determine which Palestinian organization will rally the raging youths who are just waiting for D-Day in order to set out to the streets and mount a series of murderous terror acts. In this atmosphere, the only thing the IDF - Israel Defense Forces - can do is draw up scenarios and make plans to brace for the winds of war. If everyone hears a duck quacking and they think they see duck footprints on the ground, you can't argue it doesn't even exist.

And if someone still has their doubts, there's this footage that can only corroborate the theory that the intifada is already here. Imagining themselves as carrying the torch of the intifada and turning from unemployed and futureless youths into grassroots leaders, Palestinian youths last Friday [16 December] posted a video on the Internet, declaring the establishment of the "Battalions of National Unity". According to them, they founded a joint Hamas, Fatah, Islamic Jihad and Popular Front leadership, which will become the standard-bearer of the new intifada. The masked militants pledged that the highly-charged city of Hebron will inspire all of the Palestinian Authority, as did the Jabalia refugee camp, which became the iconic beacon that blazed the way for the First Intifada.

Truth be told, there's quite a few young Palestinians who feel despair and frustration in the Palestinian Authority. They dream of becoming leaders who will be guaranteed a place of honor in the Palestinian pantheon. Marwan Barghouti, Jibril Rajoub and the well-known Hebronite family Awadallah, as well as the planners of the large-scale horrendous suicide bombings in Israel, Abbas al-Sayed and Abdullah Barghouti, have long been put on high pedestals. When there's great despair and no light, many dream of becoming like the iconic leaders of the previous intifadas. But upon visiting the big cities of the West Bank, such as Ramallah, Jenin, Nablus, Tulkarm and even Hebron, you know that in order for a big intifada to break out and change the rules of the game - as did the First Intifada which gave rise to the Oslo accords, or the Second Intifada which gave rise to Hamas - you need to have another ingredient other than rage and frustration in the streets.

Having gone through two intifadas, the Palestinian society knows that any unrest, however spontaneous and real, cannot lift itself off the ground without a political vehicle to carry it onward. Without having politicians with a vested interest, no local protest can turn into a national, historic, watershed demonstration of power. While rage, despair and frustration run high, everyone in the Authority knows that if that rage turns into chaos, the first one to pay the price is the man who was able only a few weeks ago [29 November] to bring thousands of people to the streets to celebrate the recognition of Palestine as an observer state at the United Nations.

Abu Mazen, the chairman of the Palestinian Authority, who enjoyed a few moments of joy and support the likes of which he had never experienced in his entire dreary political life, knows this full well. His people – the PLO – told me this week that "an intifada will not break out without backwind; without prodding the young people into confrontation; without a feeling they have a 'father' behind them". And that 'father' doesn't want to change world order at this time. Not only does the father not want this, but he will go to any lengths to nip any signs of an intifada in the bud, provided there are such signs.

Notwithstanding, this doesn't mean that the Hamas movement in the West Bank has no interest in instigating unrest in the Palestinian Authority. Can Hamas make Hebron, where it has more clout than in the rest of the West Bank, shudder? Can the unrest spill over to other areas in the Authority and carry away the other organizations? It's highly doubtful. An intifada sprouts leaders; leaders cajole the young. However, Fatah's leaders on the ground – senior and junior alike – have still not recovered from the Hamas blow. They're still licking their wounds. Knowing the area like the palm of their hand, these Fatah leaders know that a new intifada would elevate Hamas, while chipping away at their already precarious standing. There's a chance that a new intifada will bring Abu Mazen down, putting a kibosh on the hope for a new state, as well as on them. And that's the last thing they will help facilitate.

About a month ago, I took part in a visit of reporters to the Nafha prison, close to Mizpeh Ramon in the south of Israel. Over the years, this prison has carried a historic significance for the Palestinian inmates. Built in the mid-1980's, it was designed to house and isolate the leaders of the inmates from all the other prisons under the assumption that the hunger strikes organized by those leaders incited the inmates. So they had to be cut off from the source of their power. That method didn't necessarily pan out, because there's an infinite number of ways for new leaders to grow in Israeli prisons. And yet, Nafha prison became a symbol to an elitist prisoner leadership that was cast out to the desert. After the massive release of prisoners in the wake of the Gilad Shalit deal, some 700 inmates remained there. Their make-up could teach us a great deal on Palestinian society and its deep crisis.

Fatah inmates do not exchange a single word with their Hamas counterparts. West Bank inmates loathe the ones from Gaza, even if they're affiliated with the same organization – the Fatah. And if that's not enough, Hebron inmates despise those from Nablus, and the latter despise those from Ramallah, talking about them as if they hail from another people and another society with which they have nothing in common except the worry of having another peaceful day in the southern prison. When Hamas and Islamic Jihad prisoners staged a hunger strike, Fatah inmates from Gaza joined them willy-nilly. Nonplussed, Fatah inmates from the West Bank were watching them with pita bread in their hand. They couldn't understand what the other inmates wanted and which they could not get by negotiating wisely with the officers of the Israel Prison Service. And the same is true outside the prison walls.

Gaza and the West Bank hate each other; Hamas and Fatah are hostile. An intifada cannot be based solely on one organization.

The Fatah movement, which had quickly taken over the First Intifada 25 years ago and was able to direct the Second Intifada at its inceptive stage, is petrified of changing the fragile status quo in the territories. It is afraid of losing the little dignity it has left in Judea and Samaria. It will not let Hamas, which has fewer followers in the West Bank – as opposed to the Gaza Strip – stir waves and rock the boat, which will lead to a coup in the second part of the riven Authority. And let's not forget Abu Mazen, the man who has repeatedly stated that the armed Palestinian struggle was a historic mistake that has brought about devastation and misery to the Palestinian people and no real achievements. Israelis deride Abu Mazen, but he said those words courageously and without trepidation to the almighty Rais – Yasser Arafat – in the middle of the Second Intifada.

The Dayton Force and Palestinian Authority officials will not let a Hamas-led intifada rear its head or gather momentum because the Rais wants to bask a tad more in his UN achievement. An Intifada now will not only ruin everything for him. But it also runs counter to his worldview.

But there's another important player other than Fatah and Hamas  - the Israelis.

When you talk about an imminent intifada, the tension in the IDF is high, preparations in all the units are under way, and the points of friction are many.

Any demonstration in this atmosphere could be perceived as the onset of an uprising that should be quashed immediately with an iron fist lest it be too late.

Any uprising would trigger a reaction, which in turn will trigger another reaction. By then, nobody can stop the snowballing. Unfortunately, we've seen it all before. In the first month of the Second Intifada, some one million bullets were fired in order to show resolve, deterrence and toughness. But the one million bullets only stoked the fire more.

Predictions and prophecies are not self-fulfilling; sometimes they get helped.