Palestinian politician Mustafa Barghouti offers an alternative to the veteran Fatah and Hamas movements, preaching against corruption and for democracy and transparency. 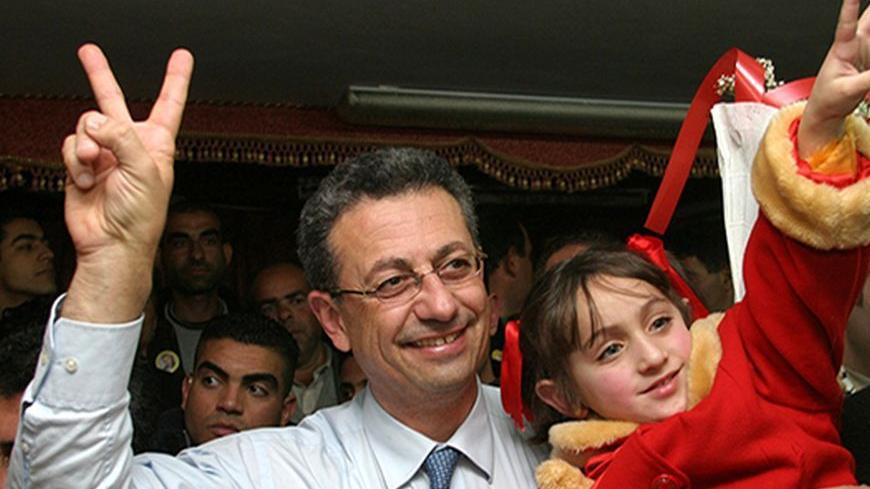 It seems that the Arab Spring has skipped over the Palestinians. Those Arab countries, where Facebook and Twitter youths rose up against existing regimes and revealed new leaders in their midst, are still waiting to see whether West Bank and Gaza youths will succeed in producing revolutionary heroes — heroes such as Wael Ghonim, one of the leaders of the Tahrir protest, or Mohammed Abdel-Aziz, leader of the "Tamarod" movement that hurled the first stone in Egypt, a stone that turned into the tremendous avalanche that brought down the Muslim Brotherhood.

Although there are latent buds of a “Palestinian Tamarod” in the Gaza Strip, Gaza's youths are concerned about making waves, evidently with justification. The Palestine square in Gaza is not Tahrir Square, and the Egyptian army that protected Egyptian protesters is not Hamas’ military wing, Izz ad-Din al-Qassam Brigades, that already used threats and violence to disperse youths attempting to protest.

By contrast, Palestinian youths of the West Bank have found a new, older, hero who has recently built up great power, inspiring many people to follow him. He is not young, nor is he a leader of students who emerged from a local university. He is an adult with a degree from the University of Stanford. He even ran in the elections for head of the Palestinian Authority, and failed. His name is Dr. Mustafa Barghouti.

When Barghouti ran against Palestinian Chairman Abu Mazen in January 2005 after former Palestinian Chairman Yasser Arafat’s death, almost no one noticed him. Who could constitute a political threat to representatives of the two movements, Fatah and Hamas, in the course of the second intifada, then in its last stages? Who even listened to a man who did not advocate a military struggle, but inscribed the popular uprising on his banner? Even without a political base, Barghouti succeeded in amassing 20% support or, as many of his opponents say, the 20% of anger and fury against Fatah and Abu Mazen. Even then, almost a decade ago, Barghouti offered himself as an alternative to what many viewed as the corrupt regime of Arafat and his political heirs.

Barghouti, who comes from the village of Deir Ghassaneh near Ramallah, is a physician, holds public positions and serves as the leader of the Palestine National Initiative. He has become the great hope of West Bank youth. The main reason for his meteoric rise stems from the great despair and tremendous loathing of tens of thousands of West Bank residents (mainly youths) toward Fatah and Hamas alike. They sense that the veteran movements have not succeeded in remedying the ills of Palestinian society and its difficulties, but instead drove it to fall apart

As in other Arab countries in which turbulence developed against the regime, West Bank youths operate and recruit on social networks, numerous online forums and blogs. They call on the youths of the new Palestinian revolution to put their trust in a man who has no movement or ideological platform supporting him. All he has is the desire for change.

We can understand why Barghouti’s messages are so captivating. The corruption that fanned out in the Palestinian Authority from the moment of its inception destroyed everything good. Any political movement within the Palestinian Authority became synonymous with corruption and filth. The ones who remained frustrated and hurting were those who were not able to get close enough to put their hands in the till and plunder the Palestinian cash register, as did all the other associates of the regime. In Fatah they now realize that the power garnered by the doctor, whom they never viewed as a threat before, now presents a big problem to them.

Hamas wasn’t exactly to Fatah’s liking either. Hamas won the 2006 elections, mainly because the rank and file wanted to punish Fatah and because they believed that the people on the Hamas list, headed by Ismail Haniyeh, would be more attentive to the nation’s needs. But this movement also disappointed the Palestinian public, despite all its welfare institutions. The situation of the Gaza residents has only deteriorated. Fatah activists were shot in their legs or backs and expelled from Gaza shamefacedly, in a humiliating shellacking. The Hamas government then became a terrifying regime for its citizens.

So, why is it so hard to establish a real protest movement in the Palestinian territories? The Palestinian Authority is not a sovereign country, the West Bank is under occupation, the Gaza Strip is under ongoing closure and it wallows in the mud of the tunnel wreckage in the Rafah region. No Wael Ghonim or Mohammed Abdel-Aziz can rise in Ramallah or Gaza and operate in the open. If an anonymous youth, a potential leader, would raise his head, someone would make sure to chop it off. He would be arrested by Hamas or Fatah, or caught in an Israeli military operation as a trouble-maker and provocateur.

Barghouti, by contrast, is a longstanding and experienced activist. Support for him increased after he was wounded a number of times in confrontations with Israel Defense Forces in the popular demonstrations that have been held in various places in the West Bank over the past year. Barghouti showed up at almost every demonstration, and slowly but surely became the leader of the unarmed demonstrators. The Fatah activists who took part in the confrontations fell asleep on the job, and today they admit that Barghouti stole the West Bank youth from them, under their very noses.

In an interview with Al-Monitor, Barghouti says that the support he receives represents the strong desire of youth to see real democracy on the ground. “I am happy that so many Palestinian youths think that I can provide such leadership, perhaps because people want to see a modern, democratic process that differs from the old methods. I think that for 13 years I tried to change things and develop a process based on independent and free cooperation and organization, and mainly mutual acceptance of one another. To accept the principle of pluralism. This is the direct result of our work with people on the ground, and not in the office.”

Excerpt from the interview:

Al-Monitor: Do you think you have a chance at changing the old system?

Barghouti: I believe in democracy. At this moment I believe in a united leadership, and I think that the Palestinians today are looking for someone who will unite everyone on behalf of one goal in which there will be room for everyone.

Al-Monitor: Do you think that elections will take place in the near future?

Barghouti: That cannot happen when there is no reconciliation between Gaza and the West Bank, so that everyone can work together. On the other hand, we are fighting for elections because it is not acceptable to postpone elections for three years already. A democratic system cannot exist this way. Meanwhile, we have already received support in the municipal elections. We already have leaders in six local councils. This is a sign that people want change and want to give a chance to the younger generation in democratic elections.

Al-Monitor: Does it surprise you that people mention your name in the same breath as the revolutionary Wael Ghonim?

Barghouti: [Laughs ] I don’t know enough about him.

Al-Monitor:  He is a symbol.

Barghouti: I know. If people view me as a symbol of change, what can I tell you, I am very satisfied.

True, elections in the Palestinian Authority are not anywhere on the horizon, as Barghouti says. But some of Barghouti’s close associates claim that he is expert at reading the political map. If the talks with the Israelis will fail, someone will have to quit the scene and someone else will have to take his place. Perhaps that will be someone who operates on Palestinian territory day after day, without looking for the perks of power for himself and his family.

The hint is clear.