Why is Egypt calling on Israel to release Marwan al-Barghouti? 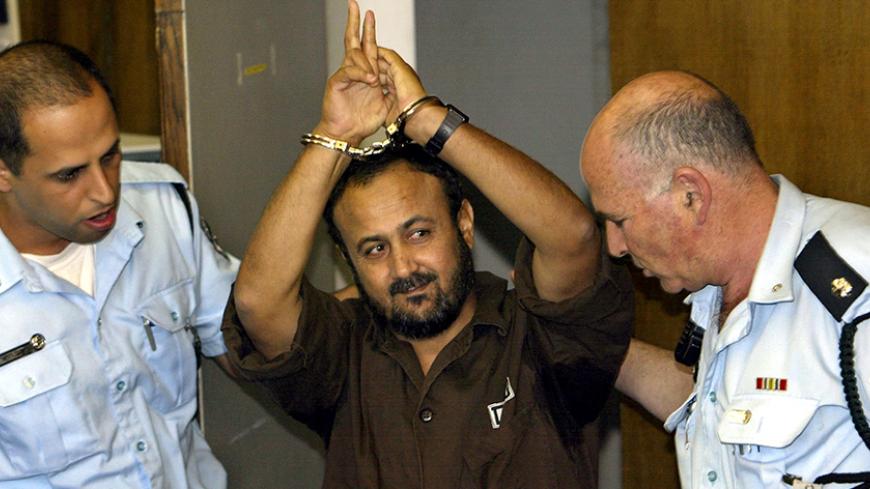 Marwan al-Barghouthi gestures as Israeli police bring him into the District Court for his judgment hearing in Tel Aviv, May 20, 2004. - REUTERS/David Silverman

“Running for President.” “A Nobel Peace Prize.” “Egyptian efforts to secure his release.” “Establishing strategic relations with Hamas.” “Reformulating the relationship with the occupation.” All are phrases used in connection with Palestinian Fatah leader Marwan Barghouti, imprisoned since 2002 in the Hadarim prison in Israel and serving five consecutive life sentences for charges of murder and attempted murder.

Calls for his release over the last several years have never stopped. If anything, they have grown more frequent of late to an unusual degree — perhaps owing to the recent revelation by his wife, Fadwa Barghouti, in a televised interview Feb. 25 with the i24news channel that he plans to run for president in the coming Palestinian elections, repeating statements by many in the media. His intention to run was connected to his proposal for a new vision — which he declared in an interview April 18 with the Hamas-affiliated Palestinian Center for Media — about establishing strategic relations with Hamas based on 10 main principles, and it also was connected to another proposal for a new vision published in the Journal of Palestine Studies on May 9 arguing against negotiations as a means of dealing with Israel. This stands in marked contrast with the policies of Fatah.

On April 5, president of the Tunisian Human Rights Defense League Fadhel Moussa presented the Nobel Peace Prize medal — won in 2015 by the Tunisian National Dialogue Quartet — to Fadwa Barghouti, who accepted the gesture on behalf of her imprisoned husband and announced his support for attempts to release him. Members of the Palestinian Legislative Council launched a campaign April 12 to nominate Barghouti for the Nobel Peace Prize.

Complementing the extraordinary groundswell of calls for Barghouti’s release, the Egyptian Foreign Ministry announced April 17 its desire for the Israeli authorities to release him, after a meeting between Egyptian Foreign Minister Sameh Shoukri and Fadwa Barghouti that same day. This came within the context of her trips to various countries to build up international support for calls to release her husband.

The fact that the Egyptian announcement that Cairo sought to see Barghouti released coincided with his wife’s statement that he intended to run for the presidency perhaps indicates his candidacy has Egypt’s blessing, given “[Barghouti’s] … wide-ranging popularity as well as his ability to convince Palestinian organizations to work with him," according to statements to Al-Monitor from a former official at the Egyptian Embassy in Ramallah.

Barghouti’s role in Fatah has not been limited to political work, like most of the current crop of leaders such as Mahmoud Abbas (Abu Mazen), president of Fatah and head of the Palestinian Authority, and Saeb Erekat, a member of the Central Committee. His role extended to military operations against Israel during the years of the second intifada before he was arrested — particularly 2000, 2001 and the beginning of 2002. He was one of the founders of Al-Aqsa Martyrs Brigades, Fatah’s military wing. The brigades’ military activity was suspended after the election of the Palestinian Authority in 2005, following Barghouti’s imprisonment.

Perhaps his absence from the movement was one of the reasons that Al-Aqsa Martyrs Brigades lapsed into inactivity. Following his arrest in 2002, the Israeli newspaper Haaretz published audio recordings of Barghouti’s interrogations at the hands of the Shabak, Israel's security service. According to those recordings, Barghouti was one of the supporters of expanding the intifada’s anti-occupation military activities beyond the Green Line — in other words, beyond the territories that were occupied in 1967 and have yet to be recovered.

Dr. Yasir Tantawi, an expert in Palestinian affairs at the Al-Ahram Center for Political Studies, told Al-Monitor that occupied peoples generally tend to support leaders with a personal history of armed struggle, as is the case with Barghouti. All the more so as Fatah’s armed activity receded in Barghouti’s absence, and did so in a manner that ran contrary to the movement’s dominant vision during Yasser Arafat’s era. That vision viewed the struggle for the 1967 territories as necessary, even if it required the use of arms against Israeli forces and settlers.

Because of his popularity, the release of Barghouti has become something both rival Hamas and Fatah are competing to achieve, owing to the vast credit and accomplishment he could add to the stock of whichever party secured his release.

It should be noted that many Hamas leaders have stressed in statements to the press and televised interviews that Barghouti’s release is a top priority. This includes Khaled Meshaal, the head of Hamas’ political office, who said in a Nov. 4, 2015, interview that his movement was concerned with securing Barghouti’s release.

A former official from the Egyptian Embassy in Ramallah who asked to remain anonymous told Al-Monitor, "The popularity of Barghouti because of his armed struggles and imprisonment made him a hero and a symbol for the Palestinian issue, and both Hamas and Fatah can't block his political programs, as happened with Yasser Arafat, Ahmed Yassin and Abdul Aziz Al-Rantissi. He can convince the two organizations to unite under his presidency, because their refusal [to do so] may reduce their popularity compared with Barghouti’s popularity."

Fathi Qarawi, a representative in the Legislative Council for the Change and Reform Bloc and a leader in Hamas in the West Bank, issued a statement May 1 in which he said that Barghouti was acceptable both internally, internationally and regionally, and that the Egyptian desire to release him was the best evidence of this. He added that in his estimation the Palestinian people would support Barghouti's bid for the presidency without directly addressing whether Hamas would support Barghouti should he run.

The Israeli news site Walla, in a report dated April 11, 2015, noted that Barghouti had reached understandings through his intermediaries with both Hamas and the Islamic Jihad to combat Israeli forces in the West Bank on the day after Abbas leaves office.

The frequency of calls to release Barghouti, including Egyptian pressure to release him and support for his candidacy in the coming presidential elections, comes only a few weeks after a Hamas delegation visited Egyptian intelligence to put an end to the tension between the two parties that arose following the fall of ousted President Mohammed Morsi on July 3, 2013. This revived Barghouti’s name as a possible consensus candidate affiliated with Fatah, which has warm ties with Egypt, but also enjoying support in Hamas’ circles.

Khaled Okasha, head of the National Center for Security Studies in Cairo, told Al-Monitor that eliminating terrorism in Sinai requires blocking its source, namely the tunnels connecting the peninsula to Gaza. However, he noted that these tunnels may be needed for Palestinians to import vital necessities, especially in light of tensions around the official border crossing at Rafah after Hamas seized control of the Palestinian side of the crossing.

According to Okasha, this situation may not end until there's an elected and decisive Palestinian Authority that can protect the crossing from any organization — whether Hamas or others — and that can facilitate the Egyptian government's mission to destroy tunnels while helping Palestinians to improve their lives, so that the crossing will be the legitimate alternative for the tunnels.

Barghouti might be the most appropriate choice for heading this elected decisive regime, especially given his popularity and history that would push rival organizations to work together under his leadership.