Jailed Palestinian leader Marwan Barghouti published a letter in the Palestinian news media calling for a “comprehensive resistance and the gun” against the Israeli occupation. 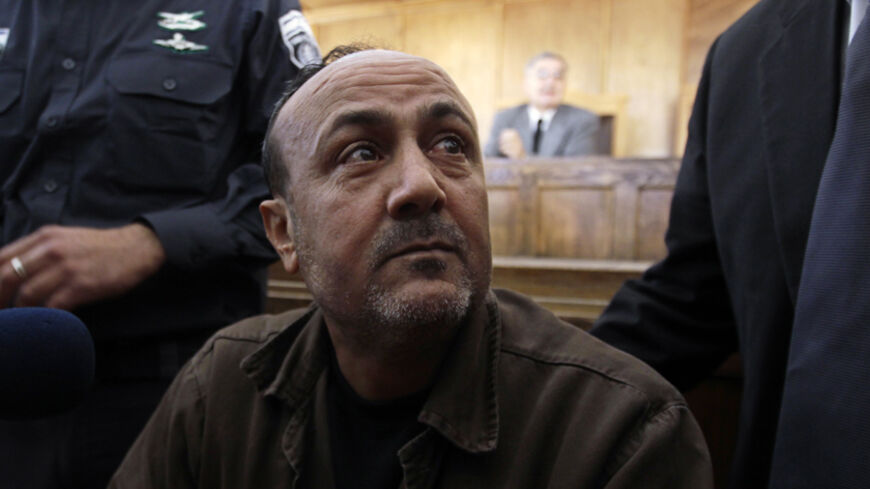 For the 23rd time since his arrest in 2002, Palestinian leader Marwan Barghouti was transferred to an isolated cell in the Israeli Hadarim prison. The Israeli press said that the punishment was due to a letter smuggled out of prison by the Palestinian leader and published in the largest Palestinian newspaper.

In the letter, published in Al Quds on Nov. 11, Barghouti remembered the late Yasser Arafat on the 10th anniversary of his death and called on Palestinians to honor him with a “comprehensive resistance and the gun” that would lead to independence. In the 632-word letter, Barghouti mentioned the term resistance three times and recalled other leaders such as Hamas’ Ahmed Yassin, the Popular Front for the Liberation of Palestine's Abu Ali Mustafa, Fatah leader Khalil Wazir Abu Jihad, Islamic Jihad’s Fathi Shiqaqi and Fatah’s Al-Aqsa Martyrs Brigade leader Raed Karmi.

Fadwa Barghouti, wife of the jailed leader, told Al-Monitor that her husband has never changed his position. “Ever since his arrest until now, he has held on to the right of comprehensive resistance that international law guarantees,” she said. Fadwa spoke to Al-Monitor before leaving for Chile and Argentina to join international events of solidarity for her husband.

When pressed about the use of the additional term of the gun, Fadwa Barghouti, who on her Facebook page had removed the word “gun,” suggested that his reference to armed resistance was a tactical statement and not a strategic one: “He is not expected to change his position while he is suffering in prison.” Fadwa Barghouti insisted that Marwan Barghouti’s policies are known to all, a reference to his general support for the peace process and the two-state solution. He has also stated on numerous occasions his opposition to attacks on civilians.

It is not clear what caused the imprisoned Palestinian leader to escalate his political rhetoric. Jamal Nazzal, a member of the Fatah Revolutionary Council and Fatah spokesman in Europe, gave a simple explanation: “It is the result of the escalation of the Israeli policies in Jerusalem,” he told Al-Monitor.

Efforts to release Barghouti, whose face adorns the Israeli wall at the strategic Qalandia checkpoint, are on the increase. The Guardian ran an op-ed by former UK Labour Party member of parliament Martin Linton, where he argued that Barghouti could be the Palestinian Nelson Mandela. “If Israel is really serious about peace, it will release Barghouti — the one man uniquely placed to negotiate an agreement,” he argued.

Barghouti, a hero to Palestinians, but considered by Israel as a high-profile terrorist, is serving multiple life terms after being convicted in an Israeli military court in 2003, which he refused to recognize. Speaking in fluent Hebrew, which he had learned during earlier imprisonment, Barghouti rejected the court’s competence. “This court represents the occupation. I will not participate in this forgery.”

A report by the Inter-Parliamentary Union said that numerous breaches of international law made it impossible to conclude that Barghouti was given a fair trial. It stated that the Barghouti case has very clearly “demonstrated that, far from bringing security, the breaches of international law have, above all, undermined the authority of Israeli justice by casting discredit on its conduct of investigations and the procedures used.”

The chronology of his detention is listed on the Free Marwan website, allowing visitors to note how long the Palestinian leader, who was elected twice as a member of the Palestinian Legislative Council, has been incarcerated. He is in his 12th year of imprisonment, three of those years in solitary confinement.

Palestinian public opinion polls conducted in the occupied territories continuously show that if allowed to run for president, Barghouti would win handily against any other candidate. In the latest poll conducted in September by the Palestinian Center for Policy and Survey Research, immediately after the end of the war on Gaza, Barghouti polled 48% while Hamas’ Ismail Haniyeh polled at 46%, although the same Hamas official received 55% when the public was asked to evaluate him against current Palestinian President Mahmoud Abbas, who at the time received 36%.

Barghouti was born in 1959 in the Ramallah village of Kubar to a large family. He was the head of the student council at Birzeit University and was deported by the Israelis in 1988 for his leadership role in the first intifada and has since been repeatedly elected to the various leadership organizations, including Fatah and the Central Council of the PLO.

The latest increase in rhetoric from the Palestinian leader might reflect the escalation in Jerusalem and other parts of the occupied Palestinian territories. It can also reflect a situation in which the popular political leader has been all but forgotten in the current efforts by Abbas to obtain recognition of Palestine worldwide. By making his tough statement, Barghouti was able to return to the headlines and to remind all of his status while gaining popular support among disheartened and depressed Palestinians who are seeing no political horizon.