Will this Palestinian be the next Nobel Peace Prize laureate?

Palestinian institutions launched an international campaign in support of the nomination for the Nobel Peace Prize of Marwan Barghouti, sentenced to life imprisonment in Israel. 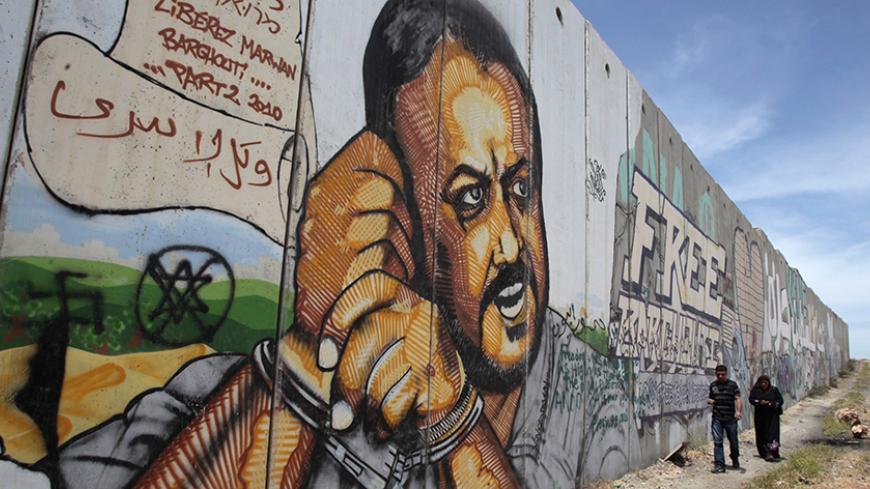 Palestinians walk past graffiti depicting jailed Fatah leader Marwan Barghouti on a section of the controversial Israeli barrier near the Qalandiya checkpoint outside the West Bank city of Ramallah, May 25, 2011.

On April 12, the Palestinian Commission of Detainees and Ex-Detainees Affairs, the Prisoners’ Club and the Palestinian Legislative Council (PLC) launched an international campaign to nominate Marwan Barghouti, who is a member of the Fatah Central Committee, for the 2017 Nobel Peace Prize. The campaign was launched in front of the council’s headquarters in Ramallah, on the 15th anniversary of Barghouti’s arrest on April 15, 2002. Barghouti, who had served as Fatah's secretary-general in the West Bank, was sentenced to five life terms and 40 additional years by Israel that accused him of being behind terrorist attacks by Al-Aqsa Martyrs Brigades, Fatah’s armed branch. This award would be the first prestigious accolade for Barghouti, should he win.

Barghouti had announced his candidacy for the presidency of the Palestinian Authortiy (PA) in the elections of 2005, only to withdraw on Nov. 27, 2004, following his meeting with Qaddoura Fares at Ohli Kedar Beersheba prison, who convinced him of the need to preserve the unity of the movement and to support Mahmoud Abbas instead. According to the law, Barghouti is entitled to run for the PA presidency despite being detained by Israel. According to Article 9 of Law No. 13 of 1995, in regard to the elections, the presidential candidate should be Palestinian, at least 35 years of age, registered in the voters’ list, have permanent residency in the region (by owning or leasing property) and fulfill the required conditions to exercise the right to vote. The candidate ought to also submit his candidacy application to the Central Elections Commission through a partisan body registered with the Elections Commission or any person whose name is on the voters’ list and fulfills these criteria.

The nomination campaign was launched March 5 after the Argentinian 1980 Nobel Prize winner Adolfo Perez Esquivel handed Hosni Abdel Wahed, the Palestinian ambassador to Argentina, a copy of the petition to nominate Barghouti.

Head of the Commission of Detainees and Ex-Detainees Affairs Issa Karake told Al-Monitor, “The people in charge of the campaign to nominate Barghouti for the Nobel Peace Prize are making contacts with dozens of parliaments entitled to nominate any person who fits the Nobel Peace Prize profile around the world, and with Nobel Prize winners to support Barghouti’s nomination with the help of the PLC, the Ministry of Foreign Affairs and its embassies."

Egypt’s foreign minister announced April 16, in the wake of his meeting with Fadwa Barghouti in Cairo, that “the ministry will continue its efforts and endeavors to release Barghouti and the Palestinian detainees.”

The nomination campaign launched a website in Arabic and English under the name “Barghouti for Nobel,” to get the message out to a global audience.

Member of Fatah’s Revolutionary Council and a friend of Barghouti, Qaddoura Fares, told Al-Monitor, “The nomination of Barghouti for the Nobel Peace Prize offers a Palestinian story that contradicts the Israeli one, which claims that Palestinian fighters are murderers and terrorists. The campaign shows Palestinian detainees as fighters for freedom and independence.”

Fares added, “The fact that a prominent international figure like Esquivel nominated Barghouti will turn the attention to the Palestinian cause and to the issue of detainees in Israel’s prisons. The nomination is like an international recognition that the Palestinian detainees are fighters for freedom rather than terrorists, as Israel claims.”

In this context Karake, who is also close to Barghouti, said, “Barghouti’s nomination for the Nobel Prize will pressure Israel to release him because this creates a supporting international public opinion at the popular, parliamentary and institutional levels, and will show that Israel is detaining a fighter who is nominated for a Nobel Peace Prize and who should not remain behind bars.”

Barghouti is one of the main nominees to succeed President Abbas, as he enjoys great popularity within Fatah and among Palestinians, according to the various polls. To the question whether this campaign could be linked to a political line that Barghouti might take to handle the presidency, Karake said, “When we launched the campaign, we did not link it to a political issue or to the presidency. We wanted to shed light on the detainees’ issue and garner international support for it. Still Barghouti has always been a prominent political leader due to his membership in Fatah’s Central Committee and since he is a member of parliament. But it reverts to him to set his own political options.”

Fares refused to give the matter too much importance, saying, “Barghouti’s nomination must remain in its context instead of being overanalyzed and interpreted in other ways.”

Yet, it seems that Barghouti will play an important role that is yet to be determined in Palestinian political life. Qassam agrees. “He has wide popularity, thanks to his struggle. But any political issues will be discussed in good time, not now,” he said.

Director of the Palestinian Center for Policy Studies and Strategic Research Hani al-Masri told Al-Monitor, “Barghouti’s nomination for a Nobel Peace Prize is due to his struggle for freedom and liberty from detention.”

Masri refused to consider this nomination a step that paves the way for Barghouti’s taking over the PA’s presidency in the future. “We should not overanalyze the nomination. This assumption is inaccurate because there aren’t any presidential elections around the corner. Abbas will not resign and Fatah leaders are not unanimously nominating Barghouti for that position, even though he enjoys their support,” he said.

Palestinians hope that Barghouti will win the Nobel Peace Prize. They will try to bring the detainees’ issue back to the forefront in the international arena with his nomination and will seek to garner political and legal support in parliaments, associations and among legal and political elites to pressure Israel and refute its story.