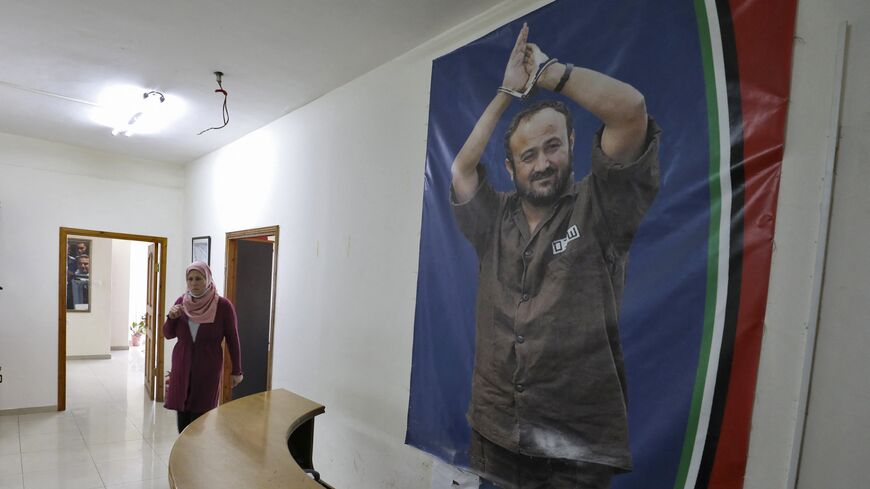 A staff member of a West Bank office in support of Palestinian prisoner Marwan Barghouti walks near his portrait in Ramallah on March 3, 2021. Barghouti has been in Israeli custody for nearly two decades after being convicted in multiple killings during the second intifada. - ABBAS MOMANI/AFP via Getty Images

As soon as the latest war on the Gaza Strip ended May 21, Egypt launched indirect talks between Hamas and Israel to advance a long-term truce between the two parties and discuss mechanisms for the reconstruction of Gaza and a prisoner swap deal.

On July 27, Israel’s Channel 12 quoted a Palestinian source as saying Hamas proposed, through Egyptian mediation, an offer to release two prisoners, Avera Mengistu and Hisham al-Sayeed — whom Hamas has said are soldiers and Israel says are civilians — in a first stage. The second stage would involve two missing Israeli soldiers, Hadar Goldin and Oron Shaul, whom Israel claims were killed in Gaza. Under the deal, Hamas, which has called the missing soldiers prisoners, would release them (or their bodies, as the case may be) in exchange for Barghouti’s freedom. Israel has yet to reply to the offer.

The channel noted that Hamas will only disclose information on Goldin and Shaul after the completion of the first stage. Hamas proposed the release of the Israelis in exchange for the release of 800 prisoners, including Barghouti and all female prisoners, as well as the bodies of about 300 Palestinians.

Barghouti has been in an Israeli prison since April 15, 2002, when he was tried and sentenced to five life sentences on charges of being behind the armed operations carried out by Al-Aqsa Martyrs' Brigades, Fatah’s armed wing, which killed and wounded dozens of Israelis with the onset of the second Palestinian intifada that began on Sept. 28, 2000.

Hamas said on multiple occasions that Barghouti, as well as the secretary-general of the Popular Front for the Liberation of Palestine, Ahmad Saadat, have priority in any prisoner swap deal. Barghouti was at the top of the list in the 2011 Gilad Shalit swap deal, but Israel refused to release him. Hamas also attaches great importance to the role Barghouti could play as part of the leadership of the Palestinian Authority (PA) in the future, given his wide popularity. Based on that, Hamas seeks to bring Barghouti back to the political arena, in light of their converging views on multiple issues, most notably the resistance and renouncing security coordination with Israel.

Barghouti has strong relations with Hamas leaders, more precisely with former prisoners such as Hamas Gaza leader Yahya Sinwar. These relations were forged during the two men’s sentences in Israeli prisons. There are also ongoing communications between Hamas’ leadership and Barghouti’s family. On June 10, Hamas chief Ismail Haniyeh received Barghouti's wife, Fadwa al-Barghouti, in Cairo to discuss the swap deal.

Hamas leader Atef Adwan told Al-Monitor, “Barghouti and senior prisoners were at the top of the list in the previous swap deal, but the PA and some of its influential leaders pressured Israel to prevent Barghouti’s release.”

He added, “The pressure placed to prevent Barghouti’s release at the time was greater than Hamas’ ability to stop or obstruct the deal, which was ready for implementation.”

“Hamas believes that Barghouti’s presence [outside prison] will have a positive impact since he has great popularity within the Fatah movement, and has many supporters. He is a patriot and can push the internal situation to safety,” he said.

Adwan further said, “Hamas wants all prisoners, including Barghouti, to be freed. I believe that Hamas will insist on releasing him this time, and it will not give up even in case of opposition from the PA or some of its leaders.”

Adwan refused to comment on whether there is progress in the indirect negotiations on the deal between Hamas and Israel. “No one can comment on this matter publicly, particularly since the negotiations are ongoing and there could be changes that could tip the balance at any moment.”

Al-Monitor contacted Barghouti’s family for comment. But they refused to speak to the media, avoiding any impact on the negotiations. A source close to the family told Al-Monitor, “The resistance is committed to the release of imprisoned leaders this time, and exhibited clear seriousness in this regard.”

Hani al-Masry, a political analyst and a candidate on the Freedom list, which Marwan Barghouti and dismissed Fatah leader Nasser al-Qudwa formed for the now-postponed legislative elections, told Al-Monitor, “During a meeting with Hamas leader Khaled Meshaal, I witnessed firsthand Hamas’ insistence on the release of Barghouti in previous deals, since the imprisoned leader was at the top of the list. But Israel refused to release him.”

Masry added, “Barghouti is a prominent Palestinian figure, and is more likely to play a role in the Palestinian arena in the future, especially if he is released. Hamas and Barghouti have converged positions on several issues.”

Masry ruled out the possibility that Hamas and Israel would reach a deal soon as the current Israeli government is struggling to make fateful and difficult decisions.

He further said that Israel will not allow the PA to change and improve itself. The idea is that if Barghouti were released and chosen to head the PA, he could accomplish changes within the PA given the wide popularity he enjoys. That is why Israel is expected to be intransigent, Masry said, adding that no one knows what cards the resistance has or what could happen in the negotiations.