Hamas chief Ismail Haniyeh promises the wife of prominent Fatah leader Marwan Barghouti that her husband will be a priority for the next swap deal with Israel. 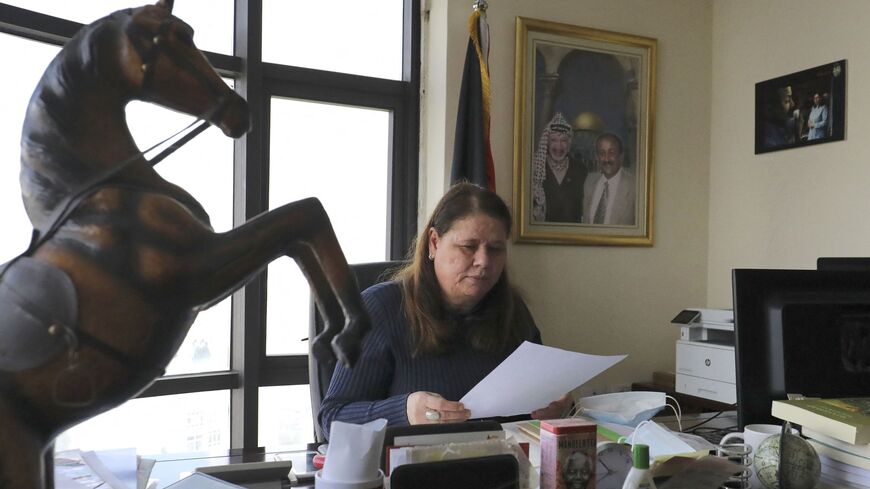 Fadwa Barghouti, the wife of Palestinian Marwan Barghouti, in Israeli custody for nearly two decades after being convicted over multiple killings during the second intifada, sits at her office in the West Bank city of Ramallah on March 3, 2021. - ABBAS MOMANI/AFP via Getty Images

GAZA CITY, Gaza Strip — A prominent Hamas leader told Al-Monitor that the movement’s chief, Ismail Haniyeh, promised Fadwa al-Barghouti, the wife of senior Fatah leader Marwan al-Barghouti, that her husband’s name will be on top of the list of released prisoners in any swap deal between Hamas and Israel.

On June 10 in Cairo, Haniyeh received Barghouti’s wife in the presence of several prominent leaders of the movement.

The Hamas source, who spoke to Al-Monitor on condition of anonymity and who was present at the meeting, said Haniyeh assured Fadwa al-Barghouti that Hamas is adamant that her husband be released in any future prisoner exchange deal with Israel, and spoke highly of her husband’s history in the Palestinian struggle.

Haniyeh arrived in Cairo on June 8 at the head of a delegation from the movement’s leadership to hold talks with Egyptian officials on several issues, most notably the conclusion of a new prisoner swap deal with Israel.

According to the source, Haniyeh and the Egyptian officials discussed the possibility of a new deal with Israel, but the Egyptian mediators believed the time was not yet ripe to make progress in the talks with Israel, suggesting postponing the issue until the new Israeli government begins working.

These talks took place after a meeting between outgoing Prime Minister Benjamin Netanyahu and Egyptian intelligence chief Abbas Kamel on May 30 in Tel Aviv, during which the two men discussed the release of Israelis from Gaza.

The Hamas source added that Hamas was ready to cut a new exchange deal with Israel, “but the problem lies with Israel itself.” The Jewish state “is currently going through a transition of powers as the new prime minister, Naftali Bennett, is taking over from Netanyahu,” the source said.

According to Hamas, the movement holds four Israelis, including soldiers Oron Shaul and Hadar Goldin, both of whom were captured in the 2014 Israeli war on Gaza. Israel, for its part, claims that both soldiers are dead. Hamas refuses to disclose their fate.

Also detained by Hamas are Avera Mengistu, an Israeli man of Ethiopian origins, and Hisham al-Sayed, and Israeli of Arab origins. Mengistu crossed into Gaza in 2014 and Sayed in 2015.

Hamas had been actively trying to reach a new prisoner exchange deal that would include the release of the 62-year-old Barghouti before the Palestinian elections that were postponed, in a bid to have him compete against President Mahmoud Abbas, 85, for the presidency.

On June 6, Al Jazeera Arabic aired audio of an unidentified person who reportedly said he was an Israeli soldier being held captive by Hamas. Some Israeli officials were looking into the possibility that the voice was that of Mengistu, who was exempted from Israeli military service, although one Israeli official called the recording a "cheap manipulation by Hamas."

Ahmad al-Mudallal, a professor of political science at the Islamic University of Gaza, told Al-Monitor that Hamas is pushing for the release of Barghouti to have him replace the aging Abbas, as it does not want any of Abbas' close associates to succeed him. These include Majed Faraj, the head of intelligence, and Hussein al-Sheikh, the minister of civil affairs, known for his strong ties with the Israeli authorities.

Mudallal said Hamas considers Barghouti as the Fatah leader who is the closest to the movement’s political line, notably in relation to the resistance practices, in all its forms, against Israel. Hamas also believes that Barghouti as the head of the Palestinian Authority would pave the way for the achievement of Palestinian reconciliation and Hamas’ access to the Palestine Liberation Organization.

Barghouti has been behind bars since April 15, 2002, in an Israeli prison, when he was tried and sentenced to five life sentences on charges of being behind the armed operations carried out by the Al-Aqsa Martyrs' Brigades, Fatah’s armed wing, which killed and wounded dozens of Israelis with the onset of the second Palestinian intifada, which erupted on Sept. 28, 2000.

Barghouti is seen as the most popular Fatah figure, receiving the largest number of votes in the internal elections of Fatah’s Central Committee, 930 votes out of a total of 1,400, among the members of the 7th Fatah Conference that was held in December 2016 in Ramallah.

A new poll by the Jerusalem Media and Communications Centre in cooperation with the German Friedrich Ebert Foundation, and the results of which were published April 21, showed that Barghouti would outperform Abbas in the event of presidential elections.

According to the poll results, Barghouti received 33.5% of the respondents’ votes, as opposed to 24.5% for Abbas and 10.5% for Haniyeh.

Palestinian Prime Minister Mohammad Shtayyeh told Al Jazeera in a June 7 interview, “President Mahmoud Abbas will issue a new decree to set a date for the general elections as soon as the new [Israeli] occupation government agrees to hold them in Jerusalem.”

Nasser al-Qudwa, head of the Freedom list running for the Palestinian elections, said April 15 that Barghouti would run in the Palestinian presidential elections and would be backed by his electoral list.

Talal Okal, a writer in the local Al-Ayyam newspaper, told Al-Monitor that he did not believe a new prisoner swap deal with Israel would happen anytime soon.

“I think the new Israeli prime minister, who is known for saying that terrorists should be killed and not released, will be more cautious about concluding an exchange deal that might result in the release of prisoners who have a history in planned military operations that killed many Israelis,” he said.

Okal added, “I think Bennett will not conclude a new exchange deal with Hamas, and if he did," it would drag on for years before being implemented.