Marwan Barghouti and Nasser al-Qudwa's popularity present a serious challenge to President Mahmoud Abbas' ruling Fatah party, and could have implications that go beyond the legislative elections. 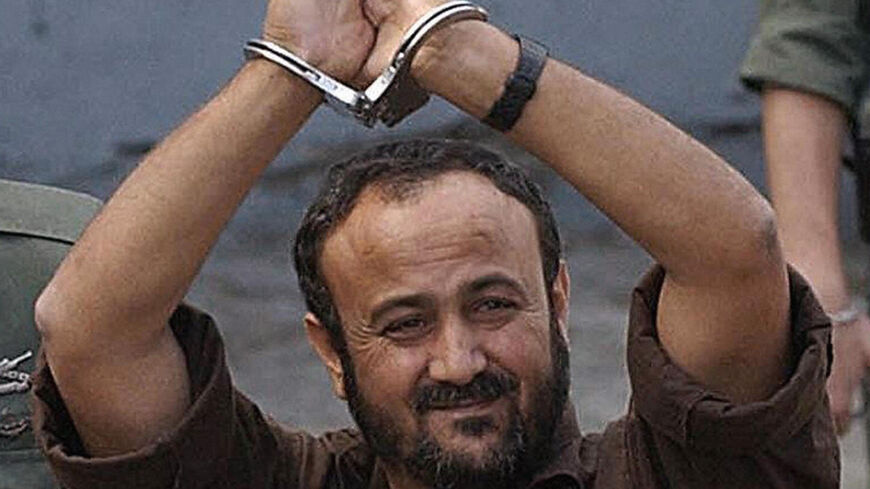 RAMALLAH, West Bank — Jailed Palestinian leader Marwan Barghouti has teamed up with Nasser al-Qudwa, a top official who was dismissed from the Fatah party of Palestinian President Mahmoud Abbas, for an alliance in the upcoming legislative elections. The two, who are among Fatah's most popular figures, are challenging their own movement in a move that could lay the foundations of a new era in Palestinian politics.

The deadline to register electoral lists for the upcoming elections, set for May 22, came at midnight on March 31, with 36 lists submitted to the Central Elections Committee.

Just hours ahead of the deadline, Fatah’s official electoral list and the Freedom list — a unified list between Barghouti and Qudwa — were both registered with the committee. Barghouti is currently serving five life sentences in an Israeli prison on involvement in killings during the second intifada.

The Freedom list includes Fatah leaders close to Barghouti, former political figures, freed prisoners, in addition to other independent candidates. The list, in which the share of women exceeds 30%, is led by Qudwa, the nephew of late Palestinian leader Yasser Arafat. Qudwa, who has a large following in the Gaza Strip, was dismissed from Fatah’s Central Committee in early March for his attempt to present a separate list of candidates. He is one of the most prominent Palestinian diplomatic figures as he served as minister of foreign affairs and Palestinian representative to the United Nations in previous years.

Barghouti’s wife Fadwa, who is a very prominent female figure within Fatah, comes second in the list. She is a member of Fatah’s Revolutionary Council, and secured the highest number of votes in the 2016 elections.

Jamal Hawil, a former Fatah Revolutionary Council member who was involved in the 2002 battle in the Jenin refugee camp and spent 11 years in Israeli prisons, is also on the list. The same applies to Fakhri Barghouti, a well-known former Palestinian prisoner who spent 33 years in an Israeli jail and was freed in a swap deal between Israel and Hamas. There is also former Fatah Revolutionary Council member and former Mayor of Bethlehem Abdel Fattah Hamayel. He served as minister in the first government Abbas chaired in 2003 and as a member of the first Palestinian Legislative Council (PLC) in 1996.

Ostensibly, the Freedom list is the dark horse in the legislative elections, gaining prominence following Barghouti and Qudwa’s electoral deal. A member of Barghouti’s family, who declined to be named, told Al-Monitor that before he took the decision to ally with Qudwa, Barghouti waited long for Fatah’s Central Committee to carry through what he had agreed upon with Fatah Central Committee member Hussein al-Sheikh during a prison visit.

The source noted that Fatah’s Central Committee did not meet Barghouti's demands to amend the electoral law to enable all citizens to run for president without the need to be part of a list or a political party, and to partake in the selection of the movement’s candidates.

This list deals a heavy blow to Fatah as it will undoubtedly divide its votes, subsequently taking its toll on its chances to win the elections. That is particularly true in the presence of a third list, affiliated with Fatah's dismissed leader Mohammed Dahlan, which implies that Fatah’s votes will be divided into at least three lists.

Hani Almasri, director-general of the Masarat think tank and a candidate on the Freedom list, told the press in front of the Central Elections Committee’s headquarters on March 31 that the Freedom list calls for changing, not reforming, the Palestinian political system. The reason is that this political system has become unreformable and requires a deep change of policies, laws and work methods, in addition to a mobilization of the Palestinian people’s potentials against the occupation, corruption and oppression, he added.

Almasri noted that the electoral alliance brought positive changes. The list gained momentum, he said, and it has become able to compete and to attract large Palestinian segments so as to bring about the required change. He claimed that the list meets the people's need for a competitive list capable of breaking the polarization between Fatah and Hamas and overcoming the impasse that the people and official institutions have been going through.

The general election is a top challenge that Qudwa and Barghouti need to overcome via their electoral alliance, in anticipation of future ones, most notably the presidential elections that Barghouti intends to run in.

Following the list registration, Qudwa told the press March 31, “We presented a very important list. Leader Marwan Barghouti and the National Democratic Forum [Qudwa's list] came forward to the Palestinian people with one list to run in the next legislative elections. It is the product of a serious job.”

Polls in recent years have indicated that Barghouti is a favorite for president in the elections. The findings of a recent opinion poll conducted by the Palestinian Center for Policy and Survey Research published March 23 showed that 48% of the Palestinians want Barghouti to be their president, 28% chose Ismail Haniyeh and 19% opted for Abbas.

Hawil told Al-Monitor that the need to pump in new blood among the people and to well establish democracy as a lasting approach were behind Barghouti’s candidacy. In addition, the Palestinian people's desire is to exercise the right to freely choose their representatives, and Barghouti’s right to run for president.

He added that Barghouti wants to bring about a big change in the Palestinian street, so as to involve all groups and the Palestinian people’s segments, in addition to Fatah cadres, particularly since there were complaints by many of them about the mechanism for the movement to choose its electoral list.

Such a unified list, led by a Fatah Central Committee member and backed by the most popular man in the movement, namely Barghouti, will not be limited to voting. Rather, it is the beginning of a new phase for the Palestinian political system.