Why some in Fatah aren't pleased about new deputy leader

Marwan Barghouti was not selected for the position of deputy leader of Fatah, despite the many votes he won during Fatah’s 7th congress, raising criticism within the movement. 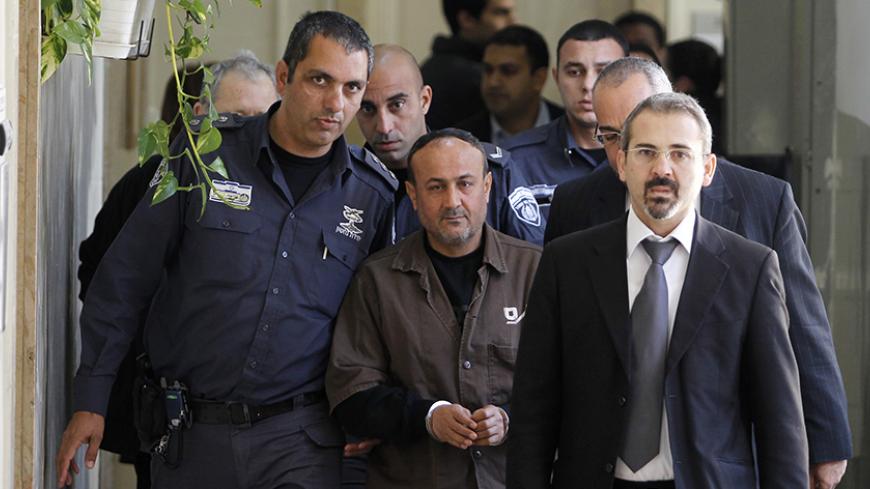 RAMALLAH, West Bank — Fatah’s Central Committee neither selected Marwan Barghouti, who is serving a prison sentence in an Israeli jail, to take up the movement's position of deputy leader nor tasked him with any leadership role during its Feb. 15 session, raising wide controversy among the movement’s leaders and cadres.

Barghouti is an influential Fatah leader and is widely popular among the movement’s youths, given his role in the establishment of Fatah's student wing, the Shabiba movement. He was a leader of the first intifada (1987-1993) and architect of the second intifada (2000-2005). Barghouti is also one of the most prominent candidates to succeed Palestinian Authority President Mahmoud Abbas.

The selection process was delayed by two months, due to consultations and internal disputes over the post of deputy leader. The appointments follow Fatah’s 7th congress that was held in Ramallah on Nov. 29, with the election of the members of the Central Committee and Revolutionary Council.

Following Fatah’s congress, Barghouti was expected to serve as the movement’s deputy leader, given the 930 out of the 1,400 votes he won at the congress and his history of struggle. He has been in Israeli jails since April 15, 2002, where he is serving five life sentences and a 40-year prison term, after Israel accused him of being responsible for armed operations conducted by Al-Aqsa Martyrs Brigades, Fatah’s military wing in the Gaza Strip, and the killing and wounding of dozens of Israelis at the beginning of the second intifada on Sept. 28, 2000.

A member of Fatah’s Central Committee told Al-Monitor on condition of anonymity that refraining from selecting Barghouti for any of the movement’s leadership posts, especially the post of deputy leader, “is not an attempt to underestimate him." In reference to the efforts and physical presence required to perform the tasks of the job, he said, "The assigned tasks require efforts that are time sensitive, and will be revised and assessed. This is why the positions were given to members who are present so that each prepares his own work plan.”

He added, “It was agreed that there is no need for Barghouti to be a part of the electoral process.”

Nevertheless, Qadura Fares, a close associate to Barghouti, said, “The need for consensus on the movement’s deputy leader is unfounded, because what happened is that one of the two candidates for the post of deputy leader — namely Mahmoud al-Aloul and Ismail Jabr — was elected,” Fares said.

He added, “When Barghouti’s name was suggested for this post during the Central Committee’s meeting, one of the committee’s members gave false information about Barghouti's not wanting to take up this post unless all members agree unanimously, which did not happen.”

Fares explained, “I don't know where they heard that Barghouti wants to be a consensus figure. The Central Committee could have contacted his wife to make sure this claim is true, instead of making a decision based on false information.” He added, “It is a major mistake that Barghouti was not given any organizational role, particularly the post of the movement’s deputy head.”

The Central Committee’s decision angered Fadwa Barghouti, Marwan’s wife, who is also a member of Fatah’s Revolutionary Council. On Feb. 15, she lambasted the Central Committee’s decision on Facebook and wrote, “A serious reconsideration within the movement is required. While Hamas chose a freed detainee, Yahya Sinwar, to lead the movement in Gaza, and while the secretary-general of the Popular Front for the Liberation of Palestine, Ahmad Saadat, is in the occupation’s prison cells, the Central Committee unfortunately insists on considering Marwan absent. It did not take into account that this will be perceived by our people as yielding to Netanyahu’s threats.”

The fact that Barghouti was not selected as deputy leader indicates that a blind eye was turned to the demands of the Fatah cadres, most notably Fatah’s freed detainees. They demanded in a Feb. 14 statement that Barghouti be appointed deputy leader because he is a consensus figure in the movement, has earned the respect of large segments of the Palestinian people and had a quasi-consensus at the 7th congress.

On Feb. 16, the Nidal al-Amoudi Battalion of the Al-Aqsa Martyrs Brigades criticized that Barghouti had not been considered for this post.

The Central Committee’s decision resulted in various analyses, with some considering that the reason is Barghouti’s inability to perform the tasks required for this post, while others did not rule out the possibility that some of the committee’s members fear Barghouti’s popularity and stature in the movement and the role he may play in the future.

Political writer and analyst Jihad Harb told Al-Monitor, “Some of the Central Committee’s members fear Barghouti’s popularity and stature among Palestinians and within the movement. The polls indicate that he has great popularity, which is a source of concern for some of the committee’s members. They are scared that Barghouti could lead the movement should the position be vacant.”