Will Nasser al-Qudwa be the dark horse of Palestinian presidential race? 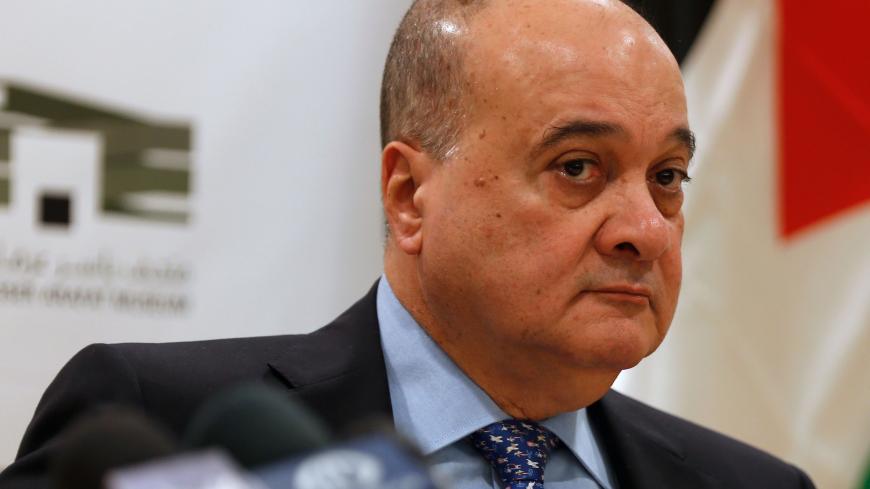 Nasser al-Qudwa, a member of Fatah's Central Committee and the nephew of late Palestinian leader Yasser Arafat, speaks during a press conference in the West Bank City of Ramallah, on Jan. 18, 2017. - ABBAS MOMANI/AFP via Getty Images

Palestinian politics got even more complicated this week, with Fatah Central Committee member and former Palestinian Foreign Minister Nasser al-Qudwa insisting on his opposition to the official Fatah electoral strategy while linking his political future to that of imprisoned leader Marwan Barghouti.

The latest attempt by Palestinian President Mahmoud Abbas to convince Qudwa not to run on a separate list has failed to pave the way for a possible challenge in the upcoming May 22 elections for the Palestinian Legislative Council (PLC).

Qudwa, who spent many years at the United Nations representing Palestine and had a run as a UN peace envoy to Syria, appears set to lead an alternative Palestinian nationalist list to the upcoming elections in direct defiance of and some say threats from Abbas not to run outside the official list. Speaking at a virtual conference organized by Bir Zeit University Feb. 19 on US President Joe Biden's foreign policy, Qudwa said elections require much more preparation and deeper dialogue with other national forces, business leaders, civil society and other active forces in Palestinian society. He dismissed any cooperation with Mohammed Dahlan.

While Qudwa has linked his political future with the imprisoned Barghouti, he appears to have opposed his reluctance to participate in the legislative elections. “We are fully with Marwan, but he needs to take a position in this political dialogue (meaning the legislative elections), and he can’t escape responsibility by saying leave me for the presidential run.” Qudwa continued, "If he wants to run for president, we are with him. But he needs to be part of this process.”

Hamadeh Faraneh, a member of the Palestine National Council, reacted in a commentary in the Jordanian daily Addustour Feb. 22, saying that Qudwa and Barghouti can’t operate without a political cover from Fatah, Hamas or both — or even Dahlan, even if he plans to run on a separate list.

Qudwa’s insistence on hitching his future with Barghouti’s is logical considering the fact that Barghouti, in jail now for 19 years, polls higher than any other Palestinian.

Last September, in a poll conducted by the Palestinian Center for Policy and Research, Barghouti received 61% of the vote versus only 32% for Ismail Haniyeh, while the Hamas leader has polled defeating Abbas by three points. In a subsequent December poll, Barghouti again polled beating the Hamas leader by nine percentage points. Hamas is unlikely to challenge either in the presidential race due to take place July 30.

Barghouti was reportedly offered to head the Fatah list for the legislative council and to choose 10 of the Fatah candidates. Fatah Central Committee member Hussein Sheikh visited Barghouti on Feb. 11 in jail to make him this offer, but he was unsuccessful in convincing him to give up running for president.

According to Palestinian Basic Law, the speaker of the PLC will become acting president for 60 days once the president resigns or is unable to continue his duties. Barghouti feels that if he is elected as Palestinian president, this would help accelerate his release. He is held in an Israeli jail on multiple life sentences, convicted of having a role in ordering fatal attacks against Israelis during the second Palestinian intifada.

Another jailed Palestinian leader, Ahmad Saadat, plans to head the list of the Popular Front for the Liberation of Palestine (PFLP), and if elected he will resign to run for president as well. Saadat was convicted of having ordered the assassination of far-right-wing Israeli Minister Rehavam Ze’eve, which occurred following Israel’s assassination of then-leader of the PFLP Abu Ali Mustafa in October 2001.

Qudwa, a nephew of late Palestinian leader Yasser Arafat, runs the Yasser Arafat Foundation and is seen as a well-respected potential leader because of his vast international experience. He resigned from the Fatah Central Committee in May 2018, only to return later after his colleagues in the committee convinced him to withdraw his resignation. Unlike Saadat and Barghouti, he has never served in an Israeli jail and needs the connection of Barghouti to strengthen his local credentials.

The possible elections of Qudwa in a separate list for the upcoming legislative or presidential run is still a long shot. But in the internal Palestinian struggle for the post-Abbas leadership of Palestinians, Qudwa could be the dark horse that can come from behind, hitching on the coattails of an imprisoned and popular Palestinian leader who will not be able to actually assume power until he is released from jail.