Will Nasser al-Qudwa be Palestine's next president?

The latest rumor has it that Palestinian diplomat Nasser al-Qudwa is in the running to succeed President Mahmoud Abbas. 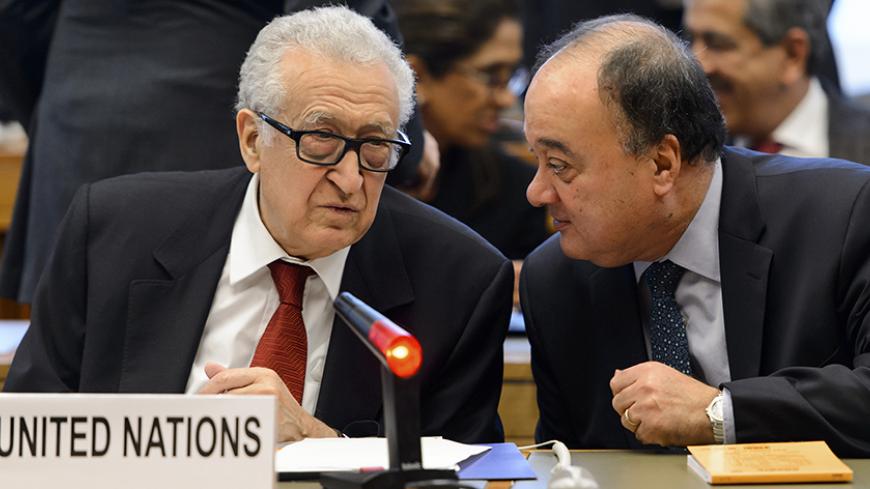 Nasser al-Qudwa (R), the UN deputy mediator on Syria, confers with Lakhdar Brahimi, the UN envoy on Syria, before a meeting at the United Nations offices in Geneva, Dec. 20, 2013. - REUTERS/Fabrice Coffrini/Pool

Even as Palestinian President Mahmoud Abbas keeps on keeping on at the age of 81, Palestinians remain preoccupied with the question of who will succeed him. In a recent reminder of the lack of a leading candidate for succession, Abbas was admitted earlier this month to Ramallah Hospital for an emergency heart catheterization after experiencing chest pains. He emerged with a clean bill of health.

Qudwa has an impressive resume. He is a former foreign minister, member of Fatah’s Central Committee, former representative for the PLO at the United Nations and Arab League envoy to Libya. He is also the nephew of late PLO Chairman and PA President Yasser Arafat.

“Qudwa has remarkable political experience,” Hani al-Masri, the head of the Palestinian Center for Strategic Studies - Masarat, told Al-Monitor. “He is a decent diplomat, and his patriotism is unquestionable. [Though] he lacks a popular political base, he is not involved in the current Palestinian feuds. He is a suitable candidate with a comprehensive vision for rebuilding the Palestinian political system and integrating its roles and powers.”

Fatah has not commented much on the media attention Qudwa has received. Some of Qudwa's colleagues in Fatah's leadership oppose his nomination, because he is neither the eldest leader or from the movement's founding generation. Abbas Zaki, a member of Fatah’s Central Committee, said Oct. 7 that talk of Qudwa succeeding Abbas is an offense to the latter because such an option is impossible and the thought of his doing so did not originate from within the movement.

Another Central Committee member, Amin Maqboul, told Al-Monitor, “Talk about nominating Qudwa to succeed Abbas is unnecessary. The sole purpose of such talk is to create confusion within the Palestinian arena.” Maqboul refused to further discuss the issue, but there appears to be more than is being said to the opposition to Qudwa.

In an article on the Jerusalem Center for Public Affairs website, Yoni Ben-Menachem, a former Israeli military intelligence officer, claims that Abbas is not so keen on Qudwa's nomination to succeed him, because Qudwa is a close associate of Dahlan, Abbas' chief nemesis, and could pave the way for Dahlan’s return to Palestinian politics. A feud erupted between Dahlan and Abbas in 2011, when Fatah's Central Committee, headed by Abbas, dismissed Dahlan and referred him to the attorney general on charges of financial corruption. Five years of Palestinian and Arab efforts to get Abbas and Dahlan to reconcile have failed. Dahlan now lives in the United Arab Emirates.

Al-Monitor was unable to reach Qudwa, but a close associate of his told Al-Monitor on condition of anonymity, “Talks about Qudwa could do more harm than good. The Arab Quartet [Saudi Arabia, Jordan, Egypt and the UAE] might want him to serve as a bridge for Dahlan to cross over to the presidency later on. Qudwa has informed some Arab parties — which he did not name — that he does not want to succeed Abbas, but he would not refuse the position if it were presented to him following a Palestinian-Arab agreement. He does not see himself as a replacement to anyone in the Palestinian arena, and he has decided not to speak about this issue publicly.”

Hamas' leadership, naturally keeping tabs on developments regarding the succession, appear to think that Fatah should not unilaterally determine the next president. Hamas, which is competing with Fatah for leadership of the Palestinian people, is an important actor that cannot be easily bypassed. Hamas has been in control of Gaza since 2007 and thus could make it easier or harder to choose a future leader. Qudwa could be in luck, however, because his political positions are not bound by the Fatah-Hamas division, so the Islamist movement might not oppose him.

“The presidency does not involve Fatah solely,” Hamas spokesman Hazem Qassem told Al-Monitor. “This issue interests the Palestinian people as a whole. The head of the PA is not the head of Fatah, and the movement cannot manipulate him or deal with [the presidency] as a partisan issue of its own. Hamas refuses to appoint a president based on external pressure. Palestinian leaders are chosen by ballot and national consensus.”

Qassem added, “Fatah should solve its internal issues without using public institutions to impose its leadership on our people. Fatah should not allow its internal conflicts to affect the course of the Palestinian cause.”

Saleh Naami, a Palestinian expert on Israeli affairs, told Al-Monitor, “The fact that the Arab states agree on Qudwa does not mean others should not declare their candidacy and compete against him for the presidency of the PA. If he were to become president, he would have to deal with [Israeli Prime Minister] Benjamin Netanyahu’s government, which will be sure to embarrass Qudwa and ruin his credibility [in Palestinians' eyes]. He would be required to do as Abbas is doing today and provide an environment that helps Israel continue its settlements [project] and maintain security cooperation with it.”

Palestinians respect Qudwa because he is not involved in the corruption issue plaguing the PA. Qudwa’s disengagement from internal Palestinian conflicts could either be a weakness or his strongest suit. Although he might seem weaker than most of those aspiring to become the next Palestinian president, many of Qudwa's fellow contenders could actually agree on him in light of his good relations with most of them in addition to his cordial ties with leaders in Fatah, the PLO and the Palestinian factions.