Hamas has announced that it is seeking a consensus candidate for the presidential elections, raising questions about the possibility of agreeing with Fatah on a name. 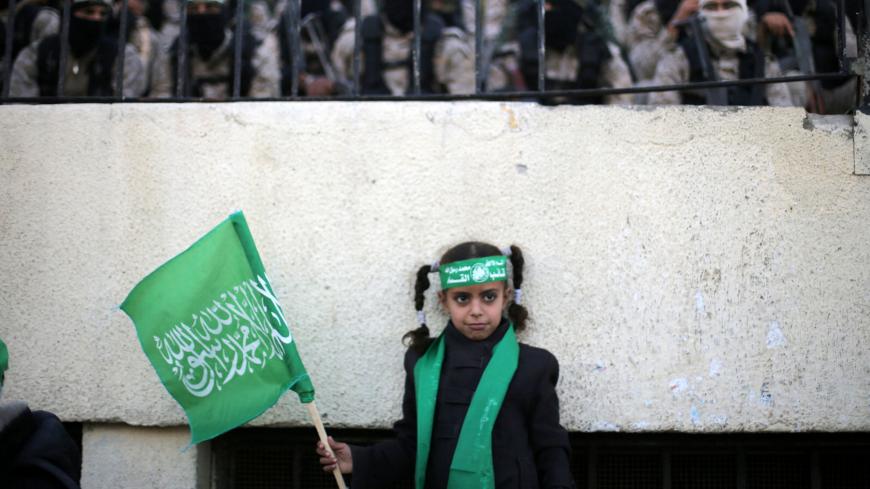 A Palestinian girl holds a Hamas flag behind a fence during a rally marking the 29th anniversary of the founding of the Hamas movement, in Khan Yunis, southern Gaza Strip, Dec. 11, 2016. - REUTERS/Ibraheem Abu Mustafa

On Nov. 29, Khalil al-Hayya, a member of Hamas' political bureau and head of its media department, announced that Hamas had informed the Palestinian factions — without specifying when — that the Palestinian people needed a national figure for the presidential elections, agreed upon by the national majority. He added that Hamas is indeed pushing in this direction, provided that the candidate is supportive of the resistance program, and he ruled out the possibility of this figure being affiliated with Hamas.

This is the first official position that Hamas has expressed regarding the presidential elections; it boycotted them in previous rounds, on Jan. 20, 1996, when Yasser Arafat won, and on Jan. 9, 2005, when Mahmoud Abbas won. The movement refused to run a candidate or vote.

Mahmoud Mardawi, a member of Hamas' national relations department, told Al-Monitor, “Hamas perceives the presidential elections as a way to change the Palestinian situation, not to create internal debate and a new division. We hope that the candidates will prioritize the resistance to the Israeli occupation. The president of the Palestinian Authority has wide powers, which requires Hamas to choose an acceptable and inclusive national figure, and the movement is pushing in the direction of selecting a consensus candidate. There are many potential names, so long as factions agree on a candidate; it would not be right for each to put forward its own names.”

While Hamas has called for a consensual presidential candidate, Fatah has seen early disagreements over its candidate for the presidential election. On Oct. 15, Hussein al-Sheikh, a member of its central committee, tweeted that Fatah’s only candidate for the presidency was Abbas. However, the secretary of Fatah’s Central Committee, Jibril Rajoub, said Nov. 4 on Palestine TV that Abbas would not run.

On Nov. 22, Nasser al-Qudwa, a member of Fatah’s Central Committee, told Al-Araby al-Jadeed that Fatah had not yet discussed its candidate for the presidential elections.

Another member of Fatah’s Central Committee told Al-Monitor on condition of anonymity, “It is too soon to discuss a candidate at this early stage. Fatah itself is beginning to experience these tensions with different positions on its candidate, and this is not normal. We want the elections to end division, not deepen it.”

Al-Monitor learned from Palestinian political circles in the West Bank and Gaza Strip that behind-the-scenes consultations are taking place between the movements and independent figures who believe they are eligible for the presidential elections. Abdel Sattar Qassem, a professor of political science at An-Najah National University in Nablus, and one of the strongest critics of the Palestinian Authority, announced his intention to run Nov. 24.

Qassem, who qualified as a candidate for the 2005 presidential vote but then withdrew from the race, told Al-Monitor, “I will run for the elections and I would gladly be a consensus candidate for the factions. I have a political program, and I welcome any unconditional factional support; otherwise I will seek a victory without them. The Palestinians will support independent candidates after they have been disappointed by the factions.”

Egyptian journalist Ahmed Gomaa, who is close to Egyptian and Palestinian political circles, told the Amad news website Nov. 1 that there are two possible candidates for the presidential elections: Marwan Barghouti, a member of Fatah's Central Committee who has been held in Israeli prisons since 2002 and who is very popular in the West Bank, and Mohammed Dahlan, a Fatah legislator and leader who was dismissed by Abbas in 2011, and now heads the Democratic Reform Current.

Meanwhile, Democratic Reform Current spokesman Imad Mohsen told Al-Monitor, “National consensus on the presidential candidate is acceptable, provided that it does not come at the expense of exercising the right to vote, and as long as consensus is reached over the national program, not only the candidate.”

Mohsen added, “Dahlan is an elected deputy, and he is very popular and has the right to run for any position." Mohsen said the Democratic Reform Council “calls for the transformation of the Palestinian political system into a parliamentary one where the people choose their deputies, and the governments are formed from the parliamentary majority blocs.”

The current political system in the Palestinian territories is a presidential one, where Abbas has managed to impose his absolute authority on all political institutions.

On Nov. 1, Qatari Ambassador to the Palestinian territories Mohammed al-Emadi met with Hamas leaders in the West Bank, headed by speaker of the Palestinian Legislative Council Aziz Dweik, and stressed the need to participate in the presidential elections and nominate independent figures.

Bassem Naim, a former health minister and a member of Hamas' international relations department, told Al-Monitor, “Hamas has decided to support a national consensus candidate, not one of its own. This will help the movement make its way into the international arena. I recently listened to foreign diplomats who visited Gaza, and said that their perception of Hamas has changed positively; increasing this positive view requires the movement to support a national candidate, away from partisan ideologies.”

Naim added, “The next president will [must] represent the entire Palestinian people, and he would preferably be from within the country, not [residing] abroad, for fear of being influenced by regional policies if he resides in one of the countries of the region.”

On Sept. 22, the Palestinian Center for Policy and Survey Research announced the results of an opinion poll among Palestinians on the presidential elections. If Barghouti and Hamas politburo chief Ismail Haniyeh were to compete, the former would get 62% and the latter 34% of votes. If Abbas does not run, Barghouti is the most popular candidate, with 36% favoring him, followed by Haniyeh with 19% and Dahlan with 8%.

Talal Abu Zarifa, a member of the political bureau of the Democratic Front for the Liberation of Palestine, told Al-Monitor that all options for the presidential elections are plausible in the front, including “nominating Tayseer Khaled, a member of its political bureau, as happened in the 2005 elections, or searching for a consensus candidate among the factions. However, it is still too early to be focusing on the identity of the presidential candidate. We fear this would distract from the efforts to obtain the presidential decree to hold the elections.”

Hamas' new stance on the presidential elections includes a clear desire to identify the next Palestinian president, which paves the way for Hamas to achieve its goals and enter the Palestinian political system from its grand presidential and executive gate after having won the previous legislative elections on Jan. 25, 2006.