Palestinians ponder who may run for president next year

Although the reconciliation process is moving slowly, a busy electoral season awaits the Palestinian territories, during which each of many parties might field their own candidate or end up forming electoral alliances. 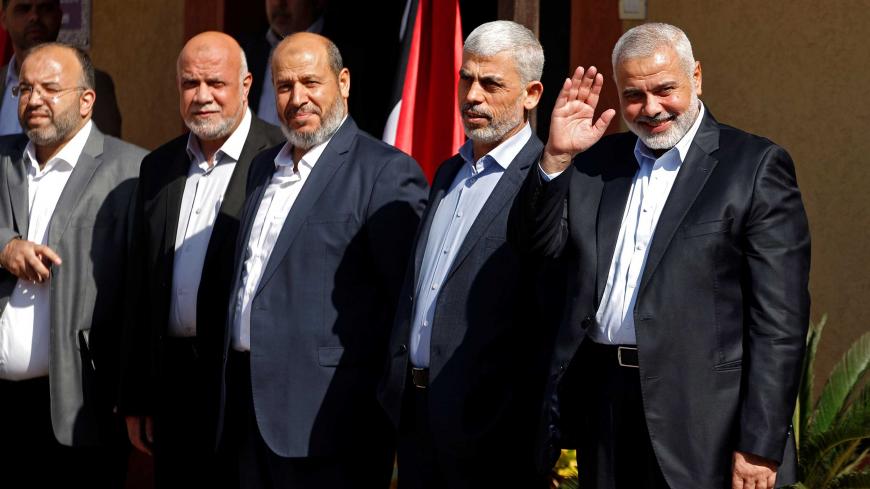 Palestinian factions have agreed to hold presidential, legislative and general elections next year. Though they have yet to set a date, the agreement is spurring speculation about who will be running for the presidency.

The groups met for reconciliation talks Nov. 21-22 in Cairo and again less than two weeks later. The factions participating are Fatah and Hamas — the two main parties — as well as the Popular Front for the Liberation of Palestine (PFLP), Palestinian Islamic Jihad, the Fida Party and the Palestinian National Initiative.

The last Palestinian presidential elections were held in January 2005, when Fatah candidate Mahmoud Abbas won 62% of the votes against six other candidates. Abbas' legal term expired in 2009, but the Palestinian division since 2007 hindered subsequent elections, keeping him in office.

The reconciliation agreement reached in October has raised hopes for a successful election near the end of 2018 with both main parties participating.

In the United States, candidates begin campaigning months, if not years, ahead of elections, but timing is apparently not a concern in this case.

“It's still too early to talk about candidates for the presidential elections," Abdullah Abdullah, a member of Fatah’s Revolutionary Council and chairman of the political committee of the Palestinian Legislative Council (PLC), told Al-Monitor. "All that has been said was that the elections may be held around the end of 2018. We have plenty of time to look into potential candidates, but I personally would like for [Abbas] to run again, because he offers a guarantee for the Palestinian national project.”

Abbas said Oct. 3 that he would rather not run for president, but that he will if the Palestinian people ask him. Results of the latest poll by the Palestinian Center for Policy and Survey Research (PCPSR) in Ramallah, released Oct. 2, showed that 67% of Palestinians in the West Bank and Gaza Strip want Abbas to resign.

Imad Falouji, a former Hamas leader who served as communications minister under late Palestinian President Yasser Arafat between 1996 and 2002 and the head of the Adam Center for Dialogue of Civilizations, told Al-Monitor, “Hamas will not name any of its leaders. It will rather put forward someone who is largely accepted both regionally and internationally. The movement will have to think twice before naming any of its leaders or supporting any candidate, especially after its difficult experience in governance between 2006 and 2017.”

The Israeli i24news website reported Oct. 26 that Hamas would participate in the presidential elections by naming the former head of its political bureau, Khaled Meshaal, as its candidate, but the movement did not comment on the reports. Khalil al-Hayya, a member of Hamas’ political bureau, said Nov. 8 only that the reconciliation agreement stipulates holding simultaneous legislative (PLC), presidential and Palestinian National Council elections, and that Hamas will exercise its right to participate in all the elections.

Yahya Moussa, a Hamas leader and the head of the PLC’s Human Rights Committee, told Al-Monitor, “It would not be wise for Hamas to show its hand when it comes to the presidential elections, whether it will name one of its leaders or support a candidate approved by all factions. However, we are well-aware that any candidate must have regional and international support. The region surrounding Palestine is plagued by instability and no one knows what could happen next, which is why discussing Hamas’ options for the upcoming elections is not the wisest thing to do [for now].”

Jamil Mezher, a member of the PFLP’s political bureau and its representative in the Gaza Strip, told Al-Monitor, “The PFLP believes that the presidential elections are important and necessary for rebuilding the Palestinian political system and restoring the constitutional and legal legitimacy in the Palestinian territories. In order for us to start discussing PFLP candidates or other approved candidates, we need to create a positive environment of trust and freedom, provide a fair judiciary and ensure fair presidential elections with acceptable results, based on peaceful rotation of power. The PFLP can then consider either a candidate of its own or an agreed-upon candidate, so long as that person corresponds to its political vision.”

Abdul Sattar Qassem, a political science professor at An-Najah National University in Nablus, told Al-Monitor, “Holding the presidential elections depends on Abbas’ presence or absence from the political scene. As long as he remains in power, Israel and the US administration won't [want] any presidential elections because they won't find a better alternative. If the elections are held, I don't think the factions will agree on one candidate. Rather, each faction — Fatah, Hamas and the left-wing force — will name a candidate of their own. Even Fatah itself may not agree on one candidate because of the differences within the movement, and Hamas is more likely to support a candidate from outside the movement than name any of its leaders.”

According to the PCPSR opinion poll from October, if Abbas doesn't run for re-election, Marwan Barghouti, a member of Fatah’s Central Committee currently jailed in Israel, would be the preferred candidate, followed by Ismail Haniyeh, the head of Hamas’ political bureau. Dismissed Fatah leader Mohammed Dahlan, who now heads the Democratic Reform current, ranked third. However, if Abbas were to run against Haniyeh, Abbas would be expected to receive 42% of votes and Haniyeh 50%.