Some Fatah members say President Mahmoud Abbas will be the party's sole candidate in the potential presidential election, though others may have their eyes on the office. 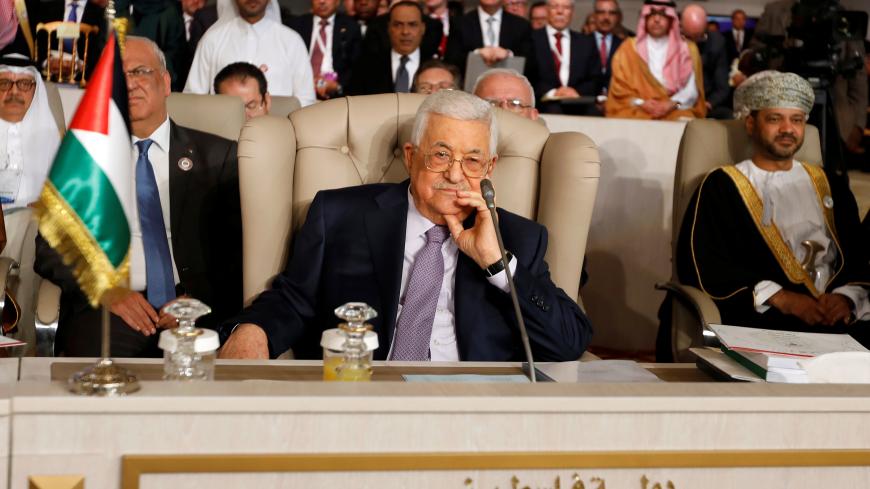 RAMALLAH, West Bank — President Mahmoud Abbas' high-profile announcement that elections will be held in all the Palestinian territories has spurred conflicting opinions on whether his Fatah party will unwaveringly stick with Abbas as its sole candidate, and whether Abbas really intends to hold elections at all.

Hussein al-Sheikh, a member of Fatah's Central Committee, took to Twitter on Oct. 15 to say that once the Palestinian Central Election Commission completes its consultations, Abbas will be setting the dates for legislative and presidential elections.

“Fatah confirms that its only presidential candidate is Abbas,” he added, though some observers said an official decision had not been reached.

Election commission Chairman Hanna Nasser has met with the Palestinian factions, including Hamas, and civil society organizations to set the stage for legislative elections, which are to be followed by the presidential election a few months later. Election commission Executive Director Hisham Kahil told Al-Monitor that the period between the elections should range from three to four months.

Hamas, on the other hand, strongly opposes the decision to separate the elections.

The last time presidential elections were held in the Palestinian territories was in January 2005, when Abbas won 62.5% of the vote, while Palestinian National Initiative Secretary-General Mustafa Barghouti won 19.5%.

Fatah seems determined to hold elections for many reasons. Chief among these is fulfilling the president's Sept. 26 announcement about them at the UN.

“We believe the elections can put an end to [internal Palestinian] division," Fatah spokesman Osama al-Qawasmi told Al-Monitor. "We want presidential and legislative elections in the West Bank, Gaza and East Jerusalem.”

Although Israel has yet to issue an official position on Palestinian elections in East Jerusalem, such elections are unlikely, as US President Donald Trump recognized Jerusalem as Israel's capital. For its part, Hamas agrees to hold elections in Gaza provided they include the PLO National Council elections.

Qawasmi, when asked about Fatah's nominee, said, “We confirm that our candidate is President Abbas in any upcoming presidential elections.”

There is a “consensus in Fatah on President Abbas due to the solid positions he has expressed on many issues, most notably his position on the 'deal of the century.'” Qawasmi was referring to Abbas' rejection of the supposed peace plan the United States proposes between Israel and Palestine.

Would Abbas, who turns 84 Nov. 15, even agree to run? His health has deteriorated in recent years.

Even if Abbas declined a nomination, Qawasmi said, “The decision-making process within Fatah is not confined to the leadership. The interests of the movement play a big role in this regard. ... Fatah believes that it would be in the public interest for Abbas to run.” Qawasmi denied that anyone else in Fatah would be running in the presidential elections. “Such a scenario is unlikely,” he said.

Abdel-Ilah al-Atira, adviser to Palestinian Prime Minister Mohammad Shtayyeh and a member of the Fatah Revolutionary Council, also told Al-Monitor that Fatah follows the principle of consensus when it comes to electoral candidates.

“There is a consensus on Abbas within Fatah, as he has proved since his inauguration that he deserves the position and is working to preserve the Palestinian cause,” he said. “If Abbas refuses to run for president, then the movement would pressure him into doing so and would issue a binding decision for him to run."

The Central Committee and the Central Council can issue a binding organizational decision, forcing the president to run. The movement's leadership doesn't want any imbalances that could arise should others run for the office.

Some observers, however, believe Abbas has no intention of actually holding presidential elections.

"By going through the motions of calling for an election that will not materialize and then blaming others when it does not ... Abbas can attempt to renew his mandate not through the ballot box but by arguing that his opponents and others made that path impossible," Yousef Munayyer wrote in an Oct. 16 piece for the Arab Center in Washington, where he is a nonresident fellow.

Mohammed Dahlan, the dismissed Fatah leader who is leading a reform movement within Fatah, the Democratic Reformist Current, criticized an Abbas renomination. In a press statement posted Oct. 16 on Facebook, Dahlan said promoting Abbas' renomination aims to perpetuate the status quo, entrenching the state of subservience to Israel and the Palestinian division.

Dahlan added, “This is not accepted at all, and we will not accept someone we know has already failed at the political, national, administrative and financial levels. The renomination of Abbas at this age and in his health condition does not make him eligible to perform presidential tasks. A great movement such as Fatah can choose a new leadership for all these heavy tasks through democratic means.”

Hani al-Masri, head of the Palestinian Center for Policy Research and Strategic Studies – Masarat, told Al-Monitor that despite what others have said, Fatah has yet to meet to decide whether it wants Abbas or another member as a candidate. He said Sheikh’s statement about Abbas was based on a personal opinion, given Sheikh's support for the president, and “an attempt to stop other Fatah members from running for the elections."

Asked whether Abbas is facing competition inside Fatah, Masri said, “If Abbas is nominated, there is a low possibility for Barghouti to run, but if Abbas does not run, then Barghouti will certainly announce his candidacy, especially since he previously announced his desire to do so.” Barghouti is serving five life sentences in Israel for terrorism-related murders, yet remains highly popular and influential among many Palestinians.