Marwan Barghouti insists on running for president in Palestinian elections

Fatah leaders are scrambling to convince imprisoned leader Marwan Barghouti to run in the Fatah list for the legislative elections, and renounce his bid to run for the presidency. 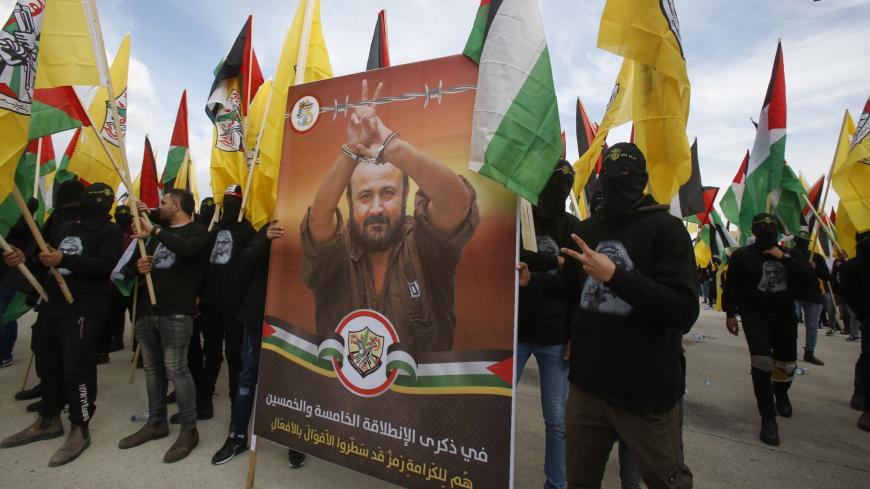 Supporters of the Palestinian Fatah movement march with a poster of imprisoned Fatah leader Marwan Barghouti during a rally marking the 55th foundation anniversary of the political party in the West Bank town of Bethlehem on Jan. 1, 2020. - MUSA AL SHAER/AFP via Getty Images

Dahlan’s participation was quickly discounted when the head of the Palestinian Central Elections Commission, Hanna Nasser, told a press conference Jan. 16 that no one with a criminal conviction in Palestinian court (which Dahlan has) could run for any office. Supporters of Dahlan are likely to run in a separate list, but they are not expected to get more than five of the 130 seats in the Palestinian Legislative Council (PLC).

The biggest problem facing the Fatah leadership has been the popular and imprisoned Fatah leader Marwan Barghouti, who insists on running for president. A visit by Hussein al-Sheikh, the minister of civilian affairs and a member of Fatah’s Central Committee, to the Israeli prison where Barghouti is held Feb. 11 did little to change his insistence. Barghouti was reportedly offered to head the Fatah list for the Palestinian Legislative Council elections and to name 10 members of the list.

According to the official Palestinian news agency Wafa, Barghouti told Sheikh during his visit to prison that he welcomes the “historic decision to hold the elections” and the success of the dialogue between the main Palestinian factions held Feb. 7-9 in Cairo. According to Sheikh, Barghouti “called for the widest possible turnout to polling centers during the upcoming elections,” which he reportedly said was the main pathway toward ending Palestinian division and restoring national unity.

What Hussein and the official news agency didn’t mention was that Barghouti rejected an offer to run as part of or to lead the Palestinian Legislative Council list. Hatem Abdel Qader, a senior Fatah leader from Jerusalem and a close ally of Barghouti, said Barghouti has no plans to run for the council. “There is a short time span between the PLC elections [May 22] and the presidential elections [July 30]. The election law requires those running for president to resign from their positions in order to qualify to run for president. Therefore it is not practical due to the time constraint for Marwan to head the Fatah list if he plans to run for president,” Abdel Qader told the London-based Arabic daily Al-Araby al-Jadeed on Feb. 13.

Barghouti, who is serving multiple life sentences in Israeli prisons over his alleged involvement in multiple Israeli deaths during the second intifada, has been in jail for 19 years and has regularly polled better than Abbas. The latest poll conducted in December 2020 by the Palestinian Center for Policy and Survey Research showed Barghouti as having a much higher percentage of support in head-to-head competition with Hamas’ Ismael Haniyeh (head of the movement’s politburo), with Barghouti polling at 61% and Haniyeh at 37%, while Abbas, in a head-to-head with Haniyeh, polled at 43% to the Hamas leader's 50%.

Hamas is unlikely to choose any presidential candidate as per the power sharing agreement signed in September in Istanbul between Jibril Rajoub, secretary-general of the Fatah Central Committee, and Hamas deputy leader Saleh al-Arouri.

One idea that has been discussed to resolve this impasse is to create the position of vice president, which doesn’t exist in the Palestinian Basic Law. Anees Sweidan, the director of the PLO's international relations department and a Fatah activist, told Al-Monitor that some are talking about the American model of having a joint president and vice president on the same ticket. “Palestinians have always wanted to have a system that ensures constitutional continuity and therefore, it is important at this stage that if President Abbas wants to run again this time that he includes a vice president on his ticket to ensure that there is continuity,” Sweidan said. If this were to happen, the newly elected Palestinian Legislative Council would have to amend the Palestinian Basic Law to accommodate this idea.

Barghouti ally Hatem Abdel Qader said Palestinian law allows someone in prison to run for office. “If Marwan [Barghouti] wins while he is still in jail, this will increase international pressure to have him released. And even if he stays in jail, a deputy can be chosen to run things until he is released,” Abdel Qader told the Al Jazeera website Feb. 15.

Abdel Qader said Barghouti wants to run because he has a clear political program and the people want him to run, as polls have shown.

Barghouti has insisted that he has no plans to run on the Fatah or any other list for the PLC elections. He appears to be suggesting that if Fatah doesn’t agree to his request, he will support external lists. One such list that is being created as a potential opposition to the official Fatah list would likely be headed by Barghouti allies Nasser al-Kidwa, Qadura Fares, Abdel Fatah Hamiel and Abdel Qader.

While it is too early to predict what will happen, Fatah leaders insist that they will do their utmost to pull their movement together and resolve all internal issues. They want to make sure that the disaster that occurred in 2006 when Hamas won the legislative elections will not be repeated. The big question, however, remains whether Fatah will insist on supporting the presidential run of their 85-year-old leader Abbas or go with their popular but jailed 61-year-old leader Barghouti.