As Palestinians gear up for the upcoming presidential and legislative elections, sharp differences are emerging within the Fatah movement, leading to the formation of a number of lists headed by or including Fatah leaders, in what is set to weaken the official list and divide Fatah votes. 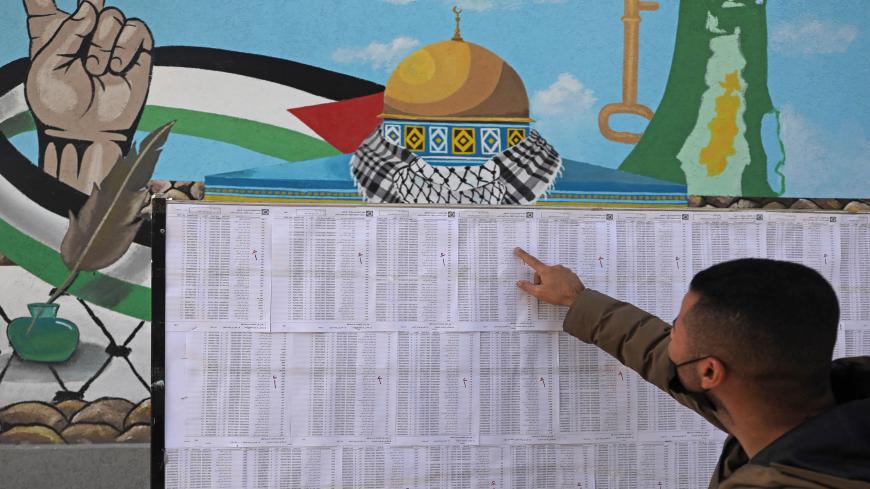 A Palestinian man looks for his name on the electoral roll at a school in Gaza City, ahead of the first Palestinian elections in 15 years, Gaza Strip, March 3, 2021. - Mohammed Abed/AFP via Getty Images

In early March, Qudwa, one of the movement’s most prominent leaders and nephew of late President Yasser Arafat, had announced his intention to form a separate electoral list that he would lead to run against Fatah's own candidates in the May vote. On March 11, Fatah released a statement saying that it had given Qudwa 48 hours to reverse this decision or be expelled from the party, yet he failed to comply.

Fatah has been trying to play up the party's unity in the lead-up to the elections. In a statement issued by the Fatah Central Committee following a meeting March 8, the movement said it will run in the upcoming Palestinian elections in a unified list that garners the support of the movement’s members. Yet the statement did not mention the disagreements between some of the Central Committee members over the formation of this list, and also had ignored Qudwa's announcement on his own list .

The committee's statement also did not mention conditions set by another leader, namely Marwan Barghouti, for him to support the unified list.

The dispute over the Fatah unified list and the mechanism of its formation emerged as soon as Palestinian President Mahmoud Abbas announced the legislative, presidential and Palestinian National Council elections’ dates, respectively, in mid-January.

As preparations to form lists for the legislative elections scheduled for May kicked off, consultations began between Fatah and Barghouti, member of the Fatah Central Committee who is currently serving a life sentence in Israeli prisons. Barghouti had announced his intention to run in the presidential elections against Abbas, whom the movement announced as its only candidate.

What’s more, Barghouti explicitly declared that he would not support the Fatah movement’s list unless it met his conditions, and he conveyed this to the movement during a Feb. 11 visit that Hussein al-Sheikh, a member of the Fatah Central Committee, who is close to Abbas, paid him in prison.

Although Barghouti has yet to announce his support for Qudwa’s list, both men disagree with the movement leaders, specifically Abbas, and they both desire change and internal reforms within the movement.

Internal differences within the movement are not limited to said lists, as Nabil Barghouti, a Fatah leader, announced his intention to run with a list to be formed by former Prime Minister Salam Fayyad.

The Fatah movement’s lists in the elections reflect the disagreements plaguing the movement.

Al-Araby Al-Jadeed newspaper had cited March 8 sources from the Fatah Central Committee as saying that Abbas gave Qudwa 48 hours to backtrack on his decision to run under a separate list and return to the movement’s official lists. Otherwise, the necessary measures will be taken against Qudwa and he will either be dismissed from the movement or his membership will be frozen, the sources added. But Qudwa continued moving ahead with the formation of his list, which shows that he is far from backtracking on his decision.

The same newspaper reported that during a meeting of the Fatah Revolutionary Council held Jan. 26, Abbas issued threats against the leaders and members of Fatah who nominate themselves outside the official Fatah movement list.

Hatem Abdel Qader, who is close to Marwan Barghouti and a member of the Fatah Revolutionary Council, told Al-Monitor that Barghouti is still waiting for his conditions to be met with a list that would guarantee a change in the Palestinian arena. Otherwise, he said, he might root for another electoral list and still run for president.

Abdel Qader said that Barghouti wants a unified list with the Fatah movement chosen on democratic, objective and integral grounds to set a new model for the Palestinian street.

He believes that “it is not up to the Central Committee to see whether or not it wants to meet these conditions.”

Despite these differences, Abdel Qader refuses to label involved individuals as defectors, “but rather people who have a different perception of the leadership of the movement.”

Abdel Qader said that the fact that Fatah figures are forming electoral lists does not infer that these are Fatah lists, and stressed that the official movement list is formed by the movement's Central Committee.

Khalil Shaheen, a researcher and political analyst at the Center for Policy Research and Strategic Studies - Masarat, believes the opposite. He told Al-Monitor that these differences and the means of dealing with them through threats and dismissals could crack the movement’s structure and future cohesion.

Shaheen said, “What we are witnessing is a natural result of the lack of a central vision capable of bringing together all members of the movement.” He said that it is a natural result of the failure to provide specific answers that respond to the Palestinian reality, be it in terms of dealing with division, the occupation or the Palestinian economic and social conditions, for which Fatah is to blame, being the cornerstone of the authority.

Shaheen said that Fatah derived its strength from the diversity of opinions within it, but given the marginalization of its institutions and the monopoly in the decision-making process, it became difficult to contain these differences that emerged. Such differences appeared as “rebellions,” and these will most certainly weaken the movement, he noted.

According to Shaheen, some Fatah leaders have been unable to make changes, which pushed them to resort to Palestinian independent figures and national figures to form separate lists from Fatah’s official list.

“Through these elections both Fatah and Hamas are seeking to entrench the reality that has resulted from division, by maintaining Fatah’s hegemony in the West Bank and Hamas’ in the Gaza Strip, and they are planning the elections to have this very outcome — not to bring about change or national achievements,” he added.

Shaheen said that this situation will weaken Fatah in the elections, as such lists will divide the movement’s votes and weaken the official list of the movement. This, he concluded, requires a different approach from Fatah, which needs to find common ground with those who are forming separate lists following the elections.