The name of Nasser al-Din al-Shaer, former deputy prime minister in the government of Hamas politburo chief Ismail Haniyeh, has been coming up as a potential consensus candidate in the Palestinian elections, given that he is close to both Hamas and Fatah. 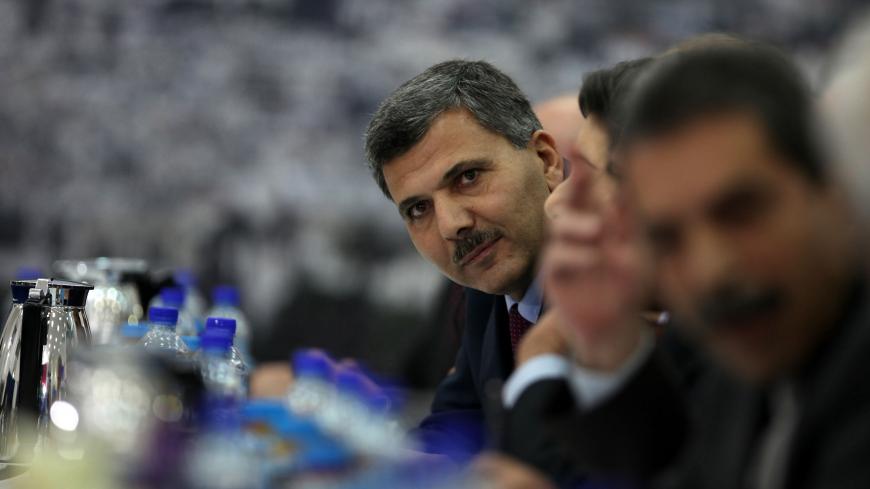 Ever since Palestinian President Mahmoud Abbas called Sept. 26 for elections to be held, there has been undeclared factional and political action to form electoral lists for the legislative balloting expected in March. Candidates have also been suggested for the presidential elections that would be held three months after the legislative ones.

Nasser al-Din al-Shaer, a former minister of education and higher education and former deputy prime minister in the government of Hamas’ politburo chief Ismail Haniyeh, is among the names Palestinians have been discussing as a consensus presidential candidate.

On Dec. 10, Palestinian journalist Nawaf al-Amer proposed Shaer as a candidate, and asked who would support him. Amer evoked a conversation with Jibril Rajoub, secretary-general of Fatah’s Central Committee, in which Rajoub told him that if Palestinian Islamists nominate Shaer, he would be a strong and competitive candidate.

Amer’s post received more than 115 comments and 200 likes, including from former ministers, members of the Palestinian Legislative Council, partisans and syndicate members, which indicates how real Shaer’s possible consensus candidacy could be.

Amer told Al-Monitor, “Despite Shaer’s Islamic background, he is equally close to Fatah and Hamas leaders. Fatah members consider him a smart, independent person. Meanwhile, some Hamas advocates believe he sets aside his Islamist beliefs in the presence of Fatah members. Still, he extinguishes political fires between the two movements, and he calls on them to make concessions.”

Shaer, 58, of Nablus, received his doctorate in Islam and Judaism from the University of Manchester in the UK in 1996. He was the dean of Al-Sharia Faculty at An-Najah National University in Nablus between 2001 and 2005. He presided over its student body in 1981, and he has had works published about the Israeli-Palestinian peace process and human rights in religious education curricula. He was arrested several times and imprisoned between 2006 and 2012 as part of Israel’s pursuit of Hamas members of the Palestinian Legislative Council and Hamas-affiliated ministers in the West Bank.

Since he entered the Palestinian government track in 2006 as former deputy prime minister, Shaer has been meeting with political envoys and Western and UN journalists visiting the West Bank to discuss the dimensions of relations with Israel and the Fatah-Hamas reconciliation. Shaer is currently a faculty member in the Islamist Studies’ Department at An-Najah National University.

He is constantly present at conferences and other events in the Palestinian territories and abroad, which gives him the opportunity to strengthen his network of relations in the region and with the international community.

Shaer told Al-Monitor, “We are now waiting for [Abbas] to issue a presidential decree necessary to schedule the date of elections. After that we will see the emergence of three candidates representing Fatah, the left, and a third candidate representing Islamists and independents together. But their nomination will depend on the legislative elections; if the results are not manipulated, Palestinians will then be encouraged to cast their votes in the presidential elections.”

He added, “The presidential candidate must halt the policy of exclusion and monopolization of the Palestinian decision-making process. For that reason I proposed back in 2017 a Fatah-Hamas joint list for the legislative elections.”

He added, “When I joined official political and government action as deputy for Haniyeh when he was prime minister in 2006, I gained a strong presence inside and abroad. I currently have a wide network of local, regional and international relations, and I meet with foreign ambassadors and consuls in the West Bank. I also give lectures in Arab capitals, and I have a constant line of communication with Palestinian leaders, mainly Abbas, which is a huge asset. Several Palestinian circles have approached me about the elections and nominations.”

During a seminar at An-Najah University on Dec. 12, Shaer called for finding consensus lists in the elections that include all Palestinian factions, since Hamas and Fatah are the two strongest movements that represent between 50% and 60% of Palestinians.

In an interview with the Arab21 website Dec. 9, he called for forming a government that represents all Palestinian forces to prevent its international boycott on the grounds that it is a Hamas government. He refused to label himself as affiliated with any political party and claimed he is a national figure.

Hussam Badran, head of Hamas’ national relations’ office, told Al-Monitor, “Hamas sees a consensus presidential candidate in a national light that goes beyond partisan interests. Hamas wants the candidate to have wide Palestinian support and not to be corrupt. He should be able to manage the national project, face Israel and disengage from it. These traits apply to any candidate whose name is proposed for the upcoming elections.”

A member of Fatah’s Revolutionary Council, Abdullah Abdullah, told Al-Monitor, “Nominating a consensus presidential candidate requires an advanced level of trust between Hamas and Fatah, which might be unavailable now, but possible.”

Badran and Abdullah refused to talk about Shaer specifically, perhaps as the issue is sensitive, and they preferred to discuss the candidates in general.

The possibility of Shaer’s candidacy coincides with the announcement of Hamas politburo head Khalil al-Haya on Nov. 29 that he prefers a consensus presidential candidate, and that Shaer might be that candidate. It is true Hamas does not unanimously back him, but he is widely accepted in the West Bank, which does not apply to other candidates.

An-Najah University political scientist Raed Nueirat told Al-Monitor, “Shaer is worthy of being a consensus presidential candidate, since he has political and administrative competence, and his resume makes him eligible to fill the position. The organizational institutions of Hamas and Fatah decide whether the movements accept him. Hamas has already announced it will not nominate any of its leaders, which increases Shaer’s chances.”

Alaa Remawi, a Ramallah-based political analyst and the director of the SND news agency office in the West Bank, told Al-Monitor, “Shaer's views are too progressive for Hamas. For that reason, there are conflicting takes on his candidacy. But he is the least internationally controversial figure close to Hamas. Although Abbas does not really welcome his nomination, he needs Shaer, who is still the most popular candidate in the West Bank, to send messages to Hamas.”

Hani al-Masri, the director of the Palestinian Center for Policy Research and Strategic Studies (Masarat), told Al-Monitor, “Shaer is close to Abbas, and I personally witnessed this closeness. But Fatah’s Central Committee and its leaders will not accept him as a consensus candidate because it sees him as a Hamas leader, even if implicitly, although his opinions differ from those of Hamas.”

Shaer said in an interview with Arabi21 on Dec. 9 that he was never been part of Hamas or affiliated with any political party. He does not represent a party or movement, although he respects all factions. He sees himself as a national academic figure, although he was in the Hamas government in 2006, and in the National Unity Government in 2007, which included Hamas, Fatah and independents.

Shaer has strong connections with both parties, but he is not a leader in either. For that reason, he could be a consensus candidate, even though his Islamist roots make him closer to Hamas, without his officially declaring it.