How will Hamas participate in upcoming elections?

After Hamas announced its readiness to participate in Palestinian elections, the leadership is considering the current circumstances and past experiences in order to come up with an effective way to take part in the polls. 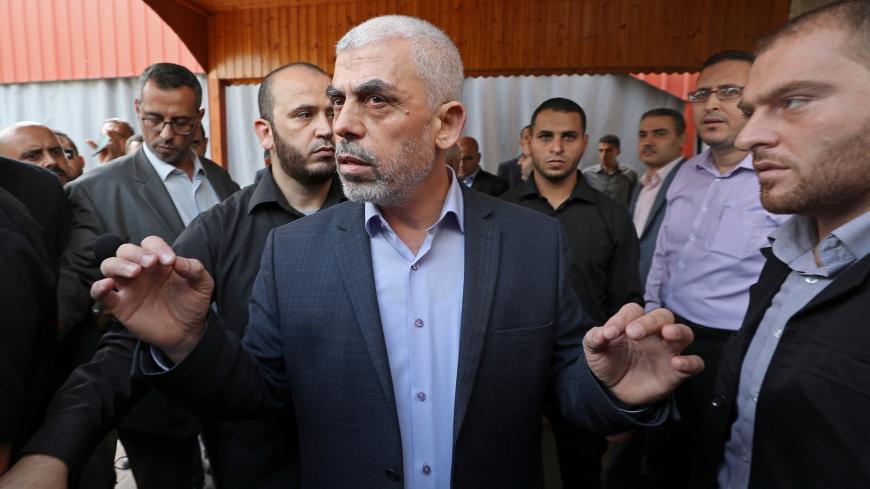 Hamas’ politburo head Ismail Haniyeh said Oct. 28 that Hamas is ready to participate in the Palestinian elections and respect their results if the conditions of transparency are met and there is respect for the balloting without fear or hesitation.

Hamas leader in Gaza Yahya Sinwar announced the party’s readiness to hold elections and its intention to rectify strategic paths in the history of the Palestinian people.

Haniyeh and Sinwar spoke during a press conference in Gaza after a meeting between Palestinian factions and a delegation from the Central Election Commission that visited Gaza on Oct. 27.

These statements entrench Hamas’ belief that the legislative elections — which President Mahmoud Abbas is expected to announce with a forthcoming presidential decree — are nearing. This calls for exploring Hamas’ options regarding its potential participation in the elections. It can either participate independently through closed organizational partisan lists, make way for political alliances with other forces or include independent candidates or technocrats on its electoral lists.

Hamas spokesperson Hazem Qassem told Al-Monitor, “The electoral system for the upcoming elections and their mechanism and timing depend on national consensus, which is the basis of the electoral process and the biggest guarantee for free and transparent elections. Hamas’ participation in the elections, whether independently or with an ally, will be discussed in due time, including the participation of Hamas leaders in electoral lists. But, what is certain is our positive and strong participation in both legislative and presidential elections.”

It is still the early stages of preparation for Palestinian elections, and there are a series of constitutional steps ahead, mainly the issuance of a presidential decree laying out the specific dates, agreement on an electoral system, oversight of the ballot sorting and acknowledgment of the results — rather than making appeals against them. In the 2006 elections, Fatah refused to recognize Hamas’ victory, for instance.

Despite the uncertainty of the situation, it still makes sense for Hamas to start preparing the ground for the elections, whether through a survey of its main potential candidates or the possible partisan alliances or support for candidates outside its ranks.

Abdel Sattar Qassem, a professor of political science at An-Najah National University in Nablus, told Al-Monitor, “Hamas’ problem is that it lacks political flexibility and finds it difficult to deal with people outside its organizational and ideological circle. Hamas only trusts its own, and it rarely resorts to intellectuals. It prefers the system of electoral districts, and its electoral alliance options are limited to the Islamic Jihad.”

In 2006, Hamas included independent candidates outside its ranks on its electoral lists. These included Ziad Abu Amr, who ran to represent Gaza but later sided with Abbas — Abu Amr is currently Palestinian deputy prime minister in Ramallah; Hussam al-Tawil, a Christian Gaza candidate (who died in 2012); and Hassan Khreishe, who ran to represent Tulkarm and now is second deputy speaker of the Palestinian Legislative Council in the West Bank.

So perhaps Hamas will seek to place independent candidates on its organizational lists — if they accept — or urge its voters to elect certain candidates who remain on independent lists provided there is an agreement on the general policies governing the candidates and Hamas' postelection relations. Hamas is afraid the candidates might turn against it after winning their seats.

Yahya Moussa, the head of the Palestinian Legislative Council Oversight Committee and a prominent Hamas political leader, told Al-Monitor, “I am leaning toward not repeating the previous models of organizational partisan lists. Hamas has gained long-lasting experience from the Higher National Commission for the Great March of Return and Breaking the Siege, which reflects unanimous national consensus. This model can be repeated in the legislative elections.”

Moussa added that Hamas, which he said essentially has single-handed control of Gaza, should “hold extended talks with all factions and not allow anyone to slacken in their responsibilities following the next elections.”

Perhaps Hamas has still not decided how it will participate in the legislative elections and is waiting for the outcome of its talks with the Palestinian Authority (PA) and factions to find out more about the electoral process.

Hamas also might keep mum about its electoral moves to avoid revealing its cards to others. Meanwhile, its cadres are on full alert, in anticipation of a sudden decision from Abbas specifying a date for the elections that is close at hand.

Jihad Harb, a researcher at the Palestinian Center for Policy and Survey Research in Ramallah, told Al-Monitor, “Hamas’ preparations for the legislative elections require it to find electoral alliances outside its circles, with academics, technocrats and businessmen, and to tolerate different components of Palestinian society, such as refugees, citizens and farmers. It should steer clear of a closed partisan list based on its previous electoral experience.”

In the West Bank, Hamas’ situation is growing more complex due to Israeli security pursuits. Consequently, many independent candidates might be afraid of joining Hamas' lists and would rather run as independents, provided they receive the support of Hamas voters.

Ghassan al-Khatib, a former minister of planning in Ramallah and director of the Jerusalem Media and Communications Center, told Al-Monitor, “In every electoral round, Hamas presents united lists and new faces, increasing its chances of winning. … But opinion polls show that Hamas' popularity has decreased in Gaza due to its governmental performance, which is not effective enough. This affects its electoral standing.”

Hamas is well aware that its rule of Gaza since mid-2007 has not been not ideal and has been filled with shortcomings, in part because Hamas was new to governmental work and also because of the blockade imposed by Israel, the PA and regional states. According to the latest polls conducted in 2018 by the Palestinian Center for Policy and Survey Research to assess the rule of Hamas, 4% of the Gaza population believes the situation is positive, while 43% of Palestinians blamed the PA and Abbas for the bad situation in Gaza and 21% said Hamas was to blame.

These numbers may have an impact on what candidates Hamas presents. Because some figures who have served in various government posts might be viewed negatively by voters, Hamas might instead propose new faces from among its organizational leaders who enjoy popular support. When a date is set for legislative elections, Hamas will officially submit its candidates for Palestinians to know.