Why many Palestinians didn't take to the polls in local elections

As Hamas and other main factions boycotted the local elections held in the West Bank, Palestinians cast their votes in low numbers reflecting their mistrust in the political forces. 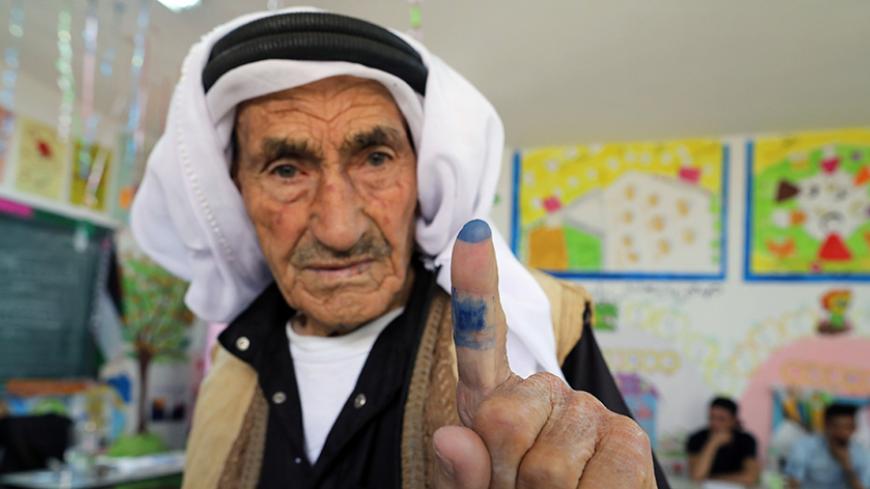 A Palestinian man shows his ink-stained finger after casting his ballot at a polling station during municipal elections in the West Bank village of Yatta, near Hebron, May 13, 2017.

In this context, Raed Enairat, a political science professor at an-Najah National University in Nablus and the head of the Contemporary Center for Studies and Policy Analysis, told Al-Monitor, “The low turnout is due to Hamas and other factions boycotting the local elections. Nablus — the West Bank’s largest city in terms of population — had the lowest voting percentage. Perhaps Palestinians did not participate because they do not see local elections as a priority, as they do not feel their political participation could help achieve the change they aspire, such as making way for political freedoms in the West Bank, establishing periodic elections and peaceful rotation of power, and putting an end to corruption.”

Enairat added, “This reluctance is solid proof that the relationship of factions with their members no longer matters to Palestinians and that partisan affiliation and organizational discipline is no longer a priority. However, if parliamentary and presidential elections were to be held, participation could be significant as Hamas and Fatah, both of which would participate in the elections, would call on their members to vote.”

The low Palestinian participation in the local elections coincided with a poll on April 28 and April 30 conducted by An-Najah National University, in which 42% of the polled Palestinians opposed the Palestinian government's decision in January to hold local elections. Meanwhile, 47% believe current conditions are conducive to holding local elections, although 74% said they would participate. But these elections were held despite Palestinians’ frustration with the stagnant political situation.

Abdul Latif Qanou, a spokesman for Hamas in the Gaza Strip, told Al-Monitor, “The lack of competition in the local elections was due to the lack of a Palestinian consensus. Fatah decided to hold the elections without consulting with the rest of the factions — in particular Hamas — inevitably affecting the turnout. To avoid such a low turnout for legislative and presidential elections, the Palestinian Authority must work on national consensus to achieve genuine partnership and give all political forces equal chances to compete, although Hamas had given its members in the West Bank the right to choose whomever local election candidate they found suitable.”

On May 9, Hamas called on its members in the West Bank to elect the most appropriate candidate to serve them, despite announcing on Jan. 31 that it will not be presenting any candidates of its own, explaining that its voter base will interact positively with these elections by electing the most efficient candidates for the local bodies.

Social media was flooded with posts about the low turnout. Khalil Assaf, the head of the Public Freedoms Committee in the West Bank, said in a May 13 Facebook post that the low voter turnout is proof that Palestinians are not pleased with those governing their country and that the Palestinian leadership and the Palestinian people march to the beat of a different drum.

Tayseer Nasrallah, a member of Fatah’s Revolutionary Council and resident of Nablus, told Al-Monitor, “The weak participation in the elections is linked to citizens' declining trust in the factions. The elections coincided with the hunger strike initiated by Palestinian prisoners in Israeli prisons since April 17, and whose families asked us to postpone the elections in order for the strike to remain under the spotlight. However, if parliamentary and presidential elections are held, Palestinians would participate more because such elections are linked to political and organizational agendas, and the factions will be keen to mobilize their members to guarantee a broad participation.”

In addition to the previous reasons for the weak turnout, the electoral system itself played a role. This system is called the closed relativity list. In this context, Mohammad Shtayyeh, a member of Fatah’s Central Committee, said May 12 that it was a complex system and does not fit in the real world, noting that one of its most important disadvantages is that it prevents independent and competent candidates from running.

Speaking to Al-Monitor, Bilal Shobaki, a political science professor at Hebron University in the West Bank, said, “The low percentage of voter turnout is the result of a combination of factors — namely the bad experience Palestinians have had with the PA not respecting the results of elections, most recently in the 2006 legislative elections when Hamas accused Fatah of disrupting the formation of the Hamas government after it won the elections in Gaza. In addition, the current local elections were delayed on several occasions, last of which was in June 2016. The largest movements — Fatah and Hamas — showed uncertainty in their electoral performance, which affected the turnout. Fatah’s candidates ran in several electoral lists, confusing voters, and Hamas boycotted the elections but called on its members to choose the better candidate. Such a behavior was bound to bring about a low voter turnout.”

The electoral process lost its mojo as voters are no longer interested in practicing this right of theirs, which inevitably affected the voting turnout. Consequently, to avoid a similar turnout in the future, the Palestinian decision-makers might have to think carefully before holding legislative and presidential elections without first achieving national consensus.