The resurgence of Palestinian tribalism

The Palestinian local elections held May 13 showed that Palestinians voted for tribal and independent lists instead of political lists, giving serious cause for concern. 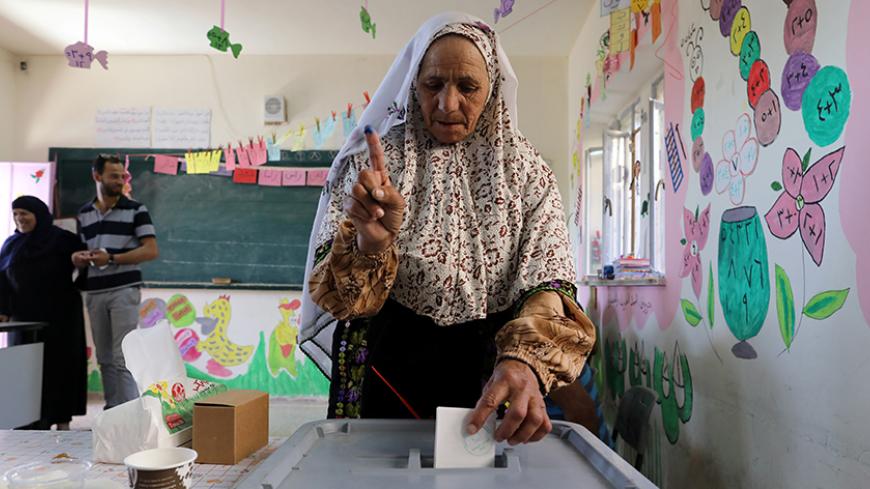 A Palestinian woman casts her ballot at a polling station during municipal elections in the West Bank village of Yatta, near Hebron, May 13, 2017. - REUTERS/Ammar Awad

GAZA CITY, Gaza Strip — Independent and tribal lists made remarkable progress in the Palestinian local elections held May 13, as they defeated factional lists such as Fatah and the Palestinian left.

Hamas, the Islamic Jihad and the Popular Front for the Liberation of Palestine boycotted the elections on the grounds that they were held in the West Bank and not the Gaza Strip. Hamas refused to hold the elections in Gaza in protest against the Palestinian High Court of Justice’s calling off in September 2016 of the local elections that were scheduled for the next month, as well as in protest of President Mahmoud Abbas’ formation of the Local Elections Court on Jan. 10 without consulting the Palestinian factions.

The elections were called off after the court accepted a lawsuit filed by Palestinian lawyer Nael al-Houh to stop the elections on the grounds that the institutions that were tasked with supervising them in the Gaza Strip were illegal and included Hamas employees.

Despite the progress achieved by the independent and tribal lists, the turnout in the elections was remarkably lower than in 2005. This year's turnout was 53.4% of the people eligible to vote. In 2005, turnout was 82.5%; those elections were the last to include all Palestinian factions both in the West Bank and Gaza.

Hisham Kahil, the executive director of the Palestinian Central Elections Commission, told Al-Monitor that the electoral process was conducted as planned and ended without any major problems. He said that there were only some minor violations and electoral irregularities carried out by some independent, tribal and political lists such as continuing their electoral campaigning in some constituencies, but that the electoral process remained unaffected.

He said turnout in the recent elections was similar to the turnout registered in the local elections of 2012 in the West Bank.

Yousef Tamiza, a campaign manager for the tribal National Alliance list in the town of Idna in Hebron, in the south of the West Bank, told Al-Monitor that the National Alliance list won 10 out of 13 seats, and included an alliance of seven families in the city of Hebron, namely the Tamiza, Islimiya, Abu Jahisha, Khalawah, Abu Zeltah, Awad and Abu Asaad families. Independent lists won the other three seats.

Tamiza told Al-Monitor that the candidates of the tribal list are selected based on an organized system — each of the seven families presents its member who best fits the candidate profile for the list — and that people were impressed by the candidates, who are effective individuals with institutional experience.

Mohamed al-Nashar, a member of the Unified Nablus list, which mostly included independent candidates, told Al-Monitor that the list won 11 out of the 15 seats allocated to the municipal council of Nablus, gaining 75% of the votes. Low turnout was registered in the city (20%).

Nashar said that in many of the West Bank governorates and villages, voters opted for independent and tribal lists because they are tired of the Palestinian parties and their political affiliations, which he said have a negative impact on the interests of citizens. Also, he added, voters have become convinced that partisan lists never implement their electoral programs.

Abdel Sattar Qassem, a professor of political science at An-Najah National University in Nablus, told Al-Monitor that the victory of the tribal lists in many municipal councils in the local elections poses a threat to the Palestinian people because of the return of what he called "tribal reunification" at the expense of the national public interest. He attributed this to the people’s loss of confidence in political parties.

He told Al-Monitor, “There is a great leadership vacuum in the Palestinian arena — both socially and politically — and someone had to fill this vacuum, so families and tribes managed to do so.”

He added, “Tribes are a separatist social structure, not a unitary one. Each family works to preserve its own interests, regardless of the public interest, and this is why a great danger is lurking. Social and political division will come to affect individuals and families in one town, whereas it has been until now only confined to Hamas and Fatah.”

Qassem called on Palestinian experts, thinkers and academics to start a discussion about the political situation and the political and social deterioration in order to reach a practical vision that isn’t focused on the views of the current political leadership and parties. The latter, he said, were the main reason behind the various divisions plaguing Palestinian society.

Emad al-Bishtawi, the head of the political science department at Hebron University, agreed with Qassem and told Al-Monitor that what prompted the Palestinian citizens to look for an alternative is that they are fed up with the Palestinian political parties, as evidenced by the results of the recent local elections.

Bishtawi said that many Palestinian factions and parties forged alliances with some tribes in the local elections based on their conviction that citizens have lost confidence in them. He warned that the looming danger lies in voters' convictions that electing tribal candidates who may be less effective is better than voting for more effective independent or partisan candidates. Bishtawi believes that tribal fanaticism could lead tribes to vote for tribal candidates, instead of other candidates who could be more competent.

The Palestinian local electoral results showed that Palestinian citizens seek to convey their discontent about the political, institutional and partisan situation in the Palestinian territories. This requires political parties to reconsider their policies.