Local elections in the West Bank seem to have boosted ties between Hamas and the Popular Front for the Liberation of Palestine, which are running as allies. 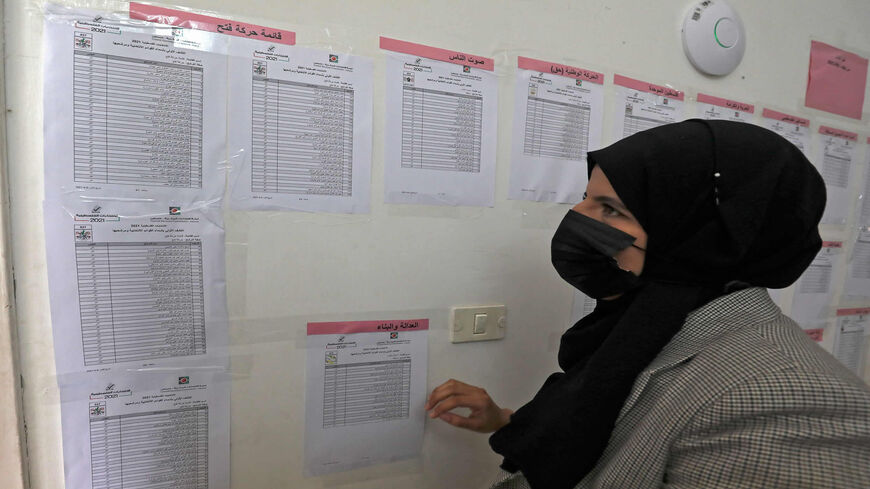 Palestinians headed to the polls March 26 to cast their votes in the second round of the local council elections held in the West Bank. The first voting round took place on Dec. 11, 2021.

The polling in the second round will take place in 50 local councils, including the main cities of the West Bank, amid fierce competition between lists affiliated with families, political parties and independents.

The Palestinian Central Elections Commission stated Feb. 22, “Among the accepted electoral lists, 178 were independent and 81 came from political parties (representing a political faction or political coalition). The number of candidates nominated for all electoral lists reached (2,537), including (678) women (accounting for 26.7% of all candidates).”

Under the name of independent lists, several alliances were forged, most notably between Hamas and the Popular Front for the Liberation of Palestine (PFLP).

Maher Harb, a PFLP leader, told Al-Monitor, “The general political situation has pushed the PFLP and Hamas toward political and national rapprochement. The two factions agree on the services and social programs that must be offered to citizens. They both nominated influential and socially acceptable candidates capable of meeting the demands of the people.”

He said that the alliance is mainly concentrated in some major conglomerates and central cities, such as Hebron, Nablus, Tulkarm and Qalqilya. “Understandings were reached in other cities such as al-Bireh, Ramallah and some towns and villages,” he noted. “In the localities where we are not running the elections as allies, we have to form an alliance in the local councils after the elections.”

He explained that the alliance between Hamas and the PFLP came following a dialogue between the two parties, namely after the Feb. 6 meeting of the PLO's Central Council, which they both boycotted. “This dialogue has set the foundations for our alliance in light of our convergent political position on the necessity of forming a broad national popular coalition in the face of hegemony, authoritarianism and unilateral decision-making,” Harb added.

On the reasons why the alliance lists were registered as independent lists, Harb said, “Most of the lists were registered in the name of independents, since people want services and not a struggle between the parties over public positions. But political parties are present in most of the lists. The alliance between the PFLP and Hamas is based on a program of services, which was discussed in detail. Our alliance was drawn on the results of the elections of the Engineers Syndicate.”

The PFLP and Hamas alliance won the Engineers Syndicate elections held in the West Bank on Aug. 26, 2021, against the Fatah movement.

In both election rounds, Hamas did not submit any list in its partisan capacity. It allowed, however, its cadres and members to run in the elections in independent lists along with professional and academic figures, or to ally with candidates from other factions, specifically, the PFLP, or with independents and family candidates.

Fazza Sawafta, a Hamas official in the West Bank, told Al-Monitor, “The alliance between Hamas and the PFLP is necessary and should be fostered in various aspects of political life, in light of the convergence in the political program between the two factions.”

He explained that many reasons drove this alliance, most notably their agreement on service programs that must be provided to the citizens in light of the difficult living circumstances. He said that the members of these lists are seriously considering forming alliances in the local councils in the post-election period.

Sawafta noted that the Hamas-PFLP alliance has political dimensions. “Our alliance is based on convergence of positions and strategies regarding the resistance program and the rejection of the general orientation of the Palestinian Authority [PA] and the Fatah movement toward the United States and its relations with Israel, which we believe threatens the resistance program,” he clarified.

“Our alliance is a source of concern for Fatah and the PA, in particular since the PFLP is part of the PLO. We tried to build the PLO on sound foundations, but Fatah and the PA refused and required recognition of the international Quartet's principles [that include the recognition of the Israeli state and renouncing violence], which thwarted reconciliation efforts,” he added.

It seems the Hamas-PFLP electoral alliance is based on their agreements on several issues. Most importantly, they both reject the political settlement between the PA and Israel and prefer armed resistance. They have also expressed converging positions on internal affairs, as they reject Fatah’s hegemony over the PA and the PLO, which they believe must be reformed.

Writer and political analyst Jihad Harb told Al-Monitor that two things contributed to crystallizing this alliance. “The two factions share a deep political understanding and both their leaders are targeted by Israel in the West Bank. Also, this alliance could bring them more votes and guarantee them victory, which could allow them to have a large space for grassroots action through local councils.”

Harb, however, argued that the alliance is a mere “tactic,” explaining that the two parties have different programs that cannot be converged, especially at the social level. “They could be allies in the local council elections, but it would be difficult for them to ally when it comes to the ruling program,” he said.

Aref Jafal, executive director of the Arab World Democracy and Electoral Monitor (Al Marsad), told Al-Monitor that the alliance between Hamas and the PFLP was not registered as a political or partisan alliance by the Central Elections Commission, but rather as an independent alliance.

“This alliance is an attempt by Hamas to play a greater role in the second round of the local elections by nominating some of its leaders as candidates. In the first round, Hamas had nominated candidates from among its supporters,” he said.

Jafal described the alliance as tactical and not strategic. “What's interesting is that Hamas is taking part in these polls in the West Bank, while rejecting plans to hold them in the Gaza Strip,” he added.

He concluded, “The participation of Hamas members in the elections can only be a central decision of the movement and not an individual decision. Hamas is a coherent central organization whose decisions are issued by its highest leadership.”