Hamas members joined independent lists and alliances in the second round of the West Bank municipal elections, despite the movement’s official boycott of the vote. 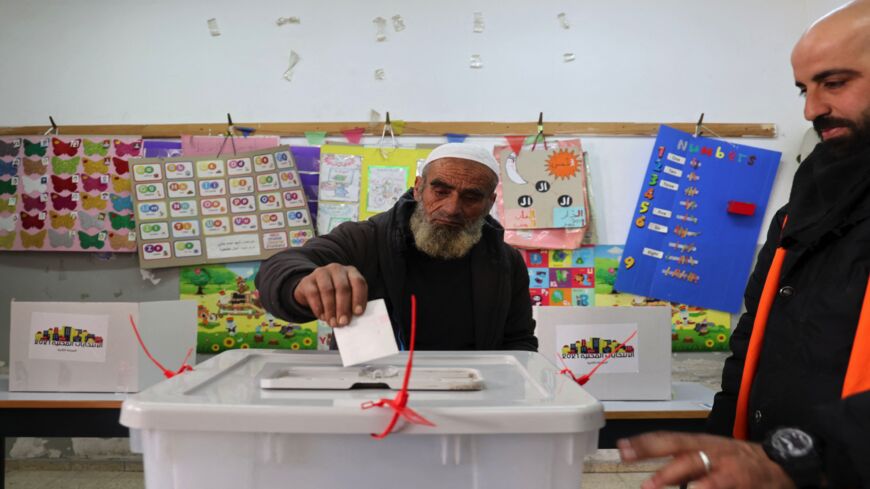 An elderly Palestinian man casts his ballot as he votes in the local elections in Beit Furik, east of the West Bank city of Nablus, on March 26, 2022. - JAAFAR ASHTIYEH/AFP via Getty Images

GAZA CITY, Gaza Strip — The Palestinian Central Elections Commission announced on March 27 the results of the recent municipal elections held in the West Bank. According to the commission, independent lists won 64.4% of the total 632 contested local council seats, whereas partisan lists won 35.6% of the seats.

The final voter turnout for the second round of the municipal elections reached 53.69% out of the 715,413 eligible voters, according to the commission.

Palestinians in the West Bank voted on March 26 in the second round of the municipal elections, the fourth local elections since the Palestinian Authority’s (PA) inception in 1995.

Palestinian President Mahmoud Abbas had decided unilaterally to postpone the legislative and presidential elections, which were scheduled for May 2021, under the pretext that Israel refused to allow east Jerusalem Palestinians to vote in the elections. Abbas’ move sparked sharp criticism from Hamas and several other Palestinian factions.

On the recent local elections, Hanna Nasser, head of the commission, said during a March 26 press conference that “voter turnout was remarkable in the second round [of elections] held in 50 towns and cities in the West Bank." He expressed regret that the elections were not held in the Gaza Strip due to Hamas’ refusal.

The first round of the local elections was held in the West Bank alone in December 2021, with a 64.79% turnout.

Despite Hamas’ official boycott of the elections, activists and members of the movement formed “independent” lists to participate. News websites reported that there were internal disputes within Hamas over a number of its activists running in the elections.

In this vein, Hamas senior leader Mahmoud Mardawi told Al-Monitor that Hamas is against holding partial elections without legislative and presidential ones. He said the movement believes the municipal elections were held upon European demands in exchange for financial support that would maintain the political system and institutions’ viability and its employees’ efficiency.

He noted that a large part of the movement’s leaders decided to run in the municipal elections jointly with the Popular Front for the Liberation of Palestine (PFLP) in 25 cities and towns, the population of which exceeds half of the West Bank population.

Mardawi denied any differences within the movement's circles over some of its members’ participation in the elections, adding that it was not easy for the movement to consent to that in the beginning.

He explained that allowing these members to run in the elections in their legal and personal capacity aimed to strengthen the unified national partnership. He said the members know how to differentiate between the movement’s official position and their desire to provide their people with efficient services, especially in light of the institutions’ and municipalities’ corruption.

Mardawi denied reports that Hamas did not officially participate in the elections out of fear of losing the electoral battle, saying, “Hamas does not fear the ballot boxes. Its program is based on the presence of a popular favorable environment that supports its resistance to Israel. Had not this favorable environment existed, Hamas would not be present.”

On the Palestinian political crisis and division, Mardawi ruled out the resolution of this crisis anytime soon in light of the regional, Israeli and US interference in the Palestinian decision-making process. He stressed that Hamas is ready for immediate elections, provided that the start would be with the presidential, then the legislative, elections, and then the Palestinian National Council elections.

Ibrahim al-Madhoun, a political analyst based in Istanbul and close to Hamas, told Al-Monitor that Hamas’ boycott of the local elections is a natural and expected matter in light of the PA refusing to hold comprehensive elections. He affirmed that Hamas does not trust the PA and noted that holding the local elections, despite its importance, means that the rotation of power is limited to the provision of services.

He said, “The Palestinian political system must be built in a consensual and comprehensive manner in a way that enhances the role of all of the people’s components.”

He indicated that Hamas refused to hold elections in the Gaza Strip to avoid reinforcing the Palestinian division and called for the revival of Palestinian institutions and the consolidation of the power rotation principle and national partnership.

Madhoun explained that Hamas respects individual privacy; thus, these lists represent the people in it and not the movement.

He added, “Hamas sent the clear message that these elections mean nothing to the movement. The message has been delivered.”

He explained that the Palestinian people need efficient new leaders in the municipal councils, so it is necessary, as a matter of social responsibility, that a number of Hamas members run in these elections in their personal capacity. He stressed that the victory or loss of these lists does not mean anything to Hamas, and the movement cannot take advantage of their victory under the pretext that they have a majority.

Samer Anabtawi, a political author and analyst, told Al-Monitor that Hamas members running in the elections jointly with the PFLP indicates that the movement wants to be part of the elections. He noted that Hamas’ alliance with the PFLP came after the PFLP boycotted the PLO’s Central Council’s meeting earlier this year.

He said, “Hamas and the PFLP have converged political positions. They formed joint lists in 25 out of 50 towns.”

Anabtawi does not believe that Hamas tried to circumvent its participation in the elections unofficially through its alliance with the PFLP, saying that the movement took into account several considerations, including not choosing the candidates from Hamas’ first organizational ranks due to political and security considerations and for fear of Israeli persecution. Also, he added, Hamas wants to send the message that it is not the only faction in dispute with the PA and other factions that oppose the PA formed an alliance with Hamas.

He indicated that the emergence of independent lists in the municipal elections shows that the people’s acceptance and trust in the factions declined, that the factions’ positions have become far from the pulse of the street and that they (the factions) are not playing their role as they should. He noted that candidates need to have a nationalist background but not necessarily a partisan one.

Anabtawi went on to say that the victory of these independent joined lists indicates there are political forces that have a major influence on the ground away from the PA.