Why did PFLP suspend participation in local elections?

The Popular Front for the Liberation of Palestine suspended participation in local elections in response to the Palestinian Authority’s security practices and general policies, which are unlikely to affect the Democratic Alliance List’s decision. 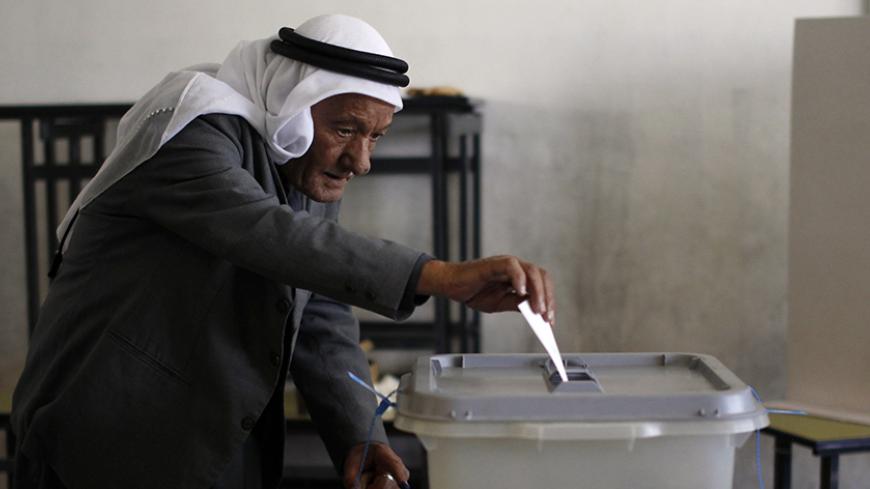 A Palestinian man casts his ballot for municipal elections at a polling station in the West Bank village of Shiyoukh, north of Hebron, Oct. 20, 2012. - REUTERS/Ammar Awad

RAMALLAH, West Bank — The Palestinian municipal elections in the West Bank, scheduled for May 13, were dealt yet another blow when the Popular Front for the Liberation of Palestine (PFLP) suspended its participation March 13. This comes following Hamas’ opposition to the elections, which will not be held in the Gaza Strip, as Hamas rejected the Palestinian High Court’s ruling on Jan. 31 to amend the electoral law.

The PFLP stance came in protest against what it described as the “Palestinian security services’ crime of suppressing a peaceful protest in front of the Courts Complex in the Ramallah and al-Bireh governorate” on March 12. The PFLP said its stance is a condemnation of the Palestinian Authority’s (PA) trial of Basil al-Araj, before he was killed by Israeli security forces March 5, and attacking protesters with tear gas and batons. Their stance was also designed to denounce “the PA and security services failing to draw lessons from these assaults.”

Palestinian Prime Minister Rami Hamdallah, in his capacity as minister of interior as well, decided March 13 to form a committee for an inquiry into the Ramallah incident headed by Undersecretary of the Interior Ministry Mohamed Mansour. The committee, which has yet to complete its task, includes the membership of Ammar Dweik, the head of the Palestinian Independent Commission for Human Rights, and Palestinian Bar Association Chairman Hussein Shabana.

The PFLP, however, did not perceive the committee to be sufficient, and stressed “the need to apologize to the Palestinian people and take serious steps, such as the suspension of those responsible for [crushing the protest] from work, until the committee completes its investigation.”

In this vein, PFLP leader Khalida Jarrar told Al-Monitor, “The withdrawal from local elections is the result of the PA policy in general — such as the ongoing political approach betting on negotiations and a settlement with Israel — and of the PA security services’ ongoing oppression of the people in particular. Most recently among these is what happened in Ramallah, which was a direct reason behind the decision to withdraw.”

The decision to withdraw from local elections does not seem to be the PFLP’s only decision. Jarrar said, “The withdrawal came in protest against the PA’s security coordination with Israel and political course as a whole. Based on that, this decision will be followed by a series of political decisions.”

Commenting on the nature of these decisions, Jarrar said, “All options are possible for future decisions, but the PFLP’s institutions need to examine the available facts and political situation, and take decisions accordingly. For instance, should the PA fail to abide by the PLO Central Council’s decisions of March 5, 2015 — which stipulate defining relations with Israel and ending security coordination — daring decisions will be taken.”

The PFLP’s withdrawal from local elections raised several questions on the future of the Democratic Alliance List consisting of the PFLP, the Democratic Front for the Liberation of Palestine (DFLP), the Palestinian People’s Party (PPP), the Palestinian National Initiative and the Palestinian Democratic Union. The alliance was formed on Aug. 10, 2016, so these factions could run in the local elections under one unified front. Nevertheless, Al-Monitor learned from DFLP and PPP sources that the other factions will not be following in the footsteps of the PFLP and withdrawing from the elections.

Jamil Mezher, a member of the PFLP’s political bureau, told Al-Monitor, “It would have been possible to hold fair local elections, but things have changed in light of the security services’ assault and dominance over the West Bank.”

Commenting on the impact of the decision on ties between the PFLP and PA, Mezher said, “The PFLP will continue to defend its principles and stances, whether the PA likes it or not.”

Decisions and delays have obstructed local elections, which were initially scheduled for Oct. 8, 2016, with Hamas taking part in them, in both the West Bank and the Gaza Strip. Yet they were disrupted after the Palestinian High Court in Ramallah decided Oct. 3 to hold them only in the West Bank, as it challenged the legitimacy of the Gaza-based courts. This prompted the Cabinet to postpone the elections for four months on Oct. 4. Then, on Jan. 3, the Palestinian Cabinet agreed to amend the elections law and establish a special court for elections. This move was rejected by Hamas, which announced at a later time that it would boycott the elections.

Commenting on the PFLP’s withdrawal, DFLP Deputy Secretary-General Qais Abdul Karim told Al-Monitor, “Suppressing protesters in Ramallah is in no way related to local elections. Should this link exist, [on the contrary] it should be a motive to participate in the elections as a way to promote the role of democratic factions, which counter security services’ practices.”

Although the PFLP withdrawal is perceived as a hard blow to local elections, considering it to be the second-largest PLO faction, local elections are unlikely to be postponed or canceled. Yet, this decision is more likely to be an introduction to a series of decisions that the PFLP plans to take in the future to confront the PA’s general policies, most of which will be within the framework of the PLO.