Kayed al-Ghul, a member of the PFLP’s political bureau, speaks to Al-Monitor about the movement’s goals and efforts to achieve Palestinian unity. 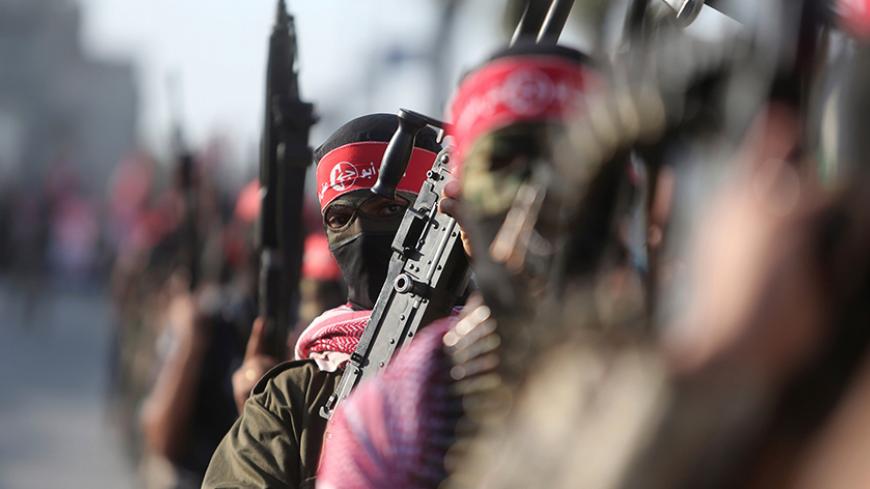 Palestinian militants from the Popular Front for the Liberation of Palestine take part in a military show to celebrate the 47th anniversary of the group's founding, in Khan Yunis in the southern Gaza Strip, Dec. 11, 2014. - REUTERS/Ibraheem Abu Mustafa

RAMALLAH, West Bank — The Popular Front for the Liberation of Palestine (PFLP) observed its 48th anniversary Dec. 11. During the ceremony, the PFLP confirmed its support for the current intifada, the resistance and liberation. It stressed the need to put an end to all agreements with Israel and accomplish Palestinian national unity.

These positions are based on a message sent by detained PFLP Secretary-General Ahmad Saadat from inside an Israeli jail on the same day.

The group emerged from the Arab Nationalist Movement after Israel defeated Arab countries including Egypt, Syria and Jordan in the Six-Day War in June 1967. Today, the PFLP — the most powerful faction of the Palestinian left-wing parties at the military and popular level and the second-largest PLO faction after Fatah — faces many challenges. In a Dec. 11 interview with Kayed al-Ghul, a member of the PFLP’s political bureau, Al-Monitor learned about the group’s plans and obstacles, the Palestinian left wing’s position and the current situation of the Palestinian cause.

Al-Monitor:  On the PFLP’s anniversary, how do you assess the movement’s present and future, especially since its last general conference in 2013, where members of the PFLP’s political bureau and the Central Council were elected, in addition to the deputy secretary-general?

Ghul:  The PFLP’s present and future depend on its existence as a main Palestinian power for the liberation of Palestine and for the mobilization of the Palestinian people as part of a long struggle. These also depend on the issues the PFLP raises and the goals it seeks to achieve. Thus, it was necessary to launch a democratic process within the PFLP through the general conference in 2013 to form its leading bodies through elections — which earned the respect of all its members and resulted in the election of cadres capable of leading the PFLP both at this stage and in the future.

Al-Monitor:  Why has the PFLP’s popularity declined today compared with when it was launched?

Ghul:  Circumstances on both the internal level within the PFLP and at the Palestinian national level have led to this. The conditions that prevailed when the PFLP was first launched allowed it to form regional and international alliances, as well as build its own force in the West Bank and the Gaza Strip. This is how it became a pioneer of the armed struggle. The PFLP carried out military operations on several occasions that showed it was the most powerful force among Palestinian factions. However, the conditions changed the Palestinian national equation and established a new reality after the Palestinian Authority [PA] was formed, as per the Oslo Accord [of] 1993. In addition, the internal division on June 7, 2007 — which created two forces polarizing the Palestinian street, Fatah and Hamas — affected the power balance. Meanwhile, internal factors contributed to the decline of the PFLP’s popularity, such as its inability to excel in armed action as it did before and the weakness of its financial and economic capabilities.

Al-Monitor:  What is the PFLP’s role in light of the ongoing division and polarization between Hamas and Fatah?

Ghul:  The PFLP never hesitated to take the initiative to end the division, whether on the personal level or in consultation with other powers. It believes there is a need for efforts greater than the ones being made. This is why we have put forward ideas and initiatives to gather all the democrats and progressives in the Palestinian arena in a national democratic progressive current that could break the Palestinian tension. Also, the PFLP played a role in providing initiatives to end the division, unify the Palestinian arena and activate the PLO according to a political vision with a spirit of liberal struggle.

Al-Monitor:  In light of the PLO’s exclusivity in decision-making within the organization, some accuse you of only criticizing without escalating your protest. How do you respond to that?

Ghul:  Objection does not necessarily mean retreating from the PLO or suspending our membership. We have played this role before in the meetings of the PLO’s Palestinian National Council, the PLO’s Executive Committee and the Palestinian Central Council in protest of some decisions and policies. But it is important to know that the PFLP is working within the PLO for radical reform. We were the first to put forward the need for the PLO to develop and regain respect for its role through inclusive elections to form the organization’s institutions, to reconsider all the PA’s functions as per the Oslo Accords and to adopt a comprehensive political and national program.

Al-Monitor:  Why is the Palestinian left wing still scattered?

Al-Monitor:  How does the PFLP evaluate the Palestinian armed resistance?

Ghul:  The armed resistance is a major form of resistance for the Palestinian people. It must be expanded and put to good use while linking it to a general, agreed-upon national strategic vision. Any military action should be based on an agreed-upon national strategy. … This is why we call for forming a unified national resistance front that would operate according to a military strategy to face the occupation through resistance in many positions based on our convictions in this line of struggle.

Al-Monitor:  What hinders the formation of the national resistance front?

Ghul:  Categorical thinking impedes this, as do those who are trying to have exclusivity even in armed actions. There were talks among the armed resistance factions, and everyone expressed their readiness for military cooperation. We continue to demand this cooperation and we always will.

Al-Monitor:  What is the PFLP’s position regarding the truce with Israel?

Ghul:  The PFLP’s position is fixed and stems from the belief that any truce must be in the context of a tactical step that serves the resistance. We have declared our position, rejecting the idea of a truce that had been around since the PA was first formed. We believe a truce with the occupation — which works day and night to complete its project in Palestine through settlement and Judaization — is wrong in the political sense, as a truce would avert the Palestinian people from resisting the occupation. We reject any attempts to deprive the Palestinian people of the resistance weapon or to subdue the resistance by controlling it and pressuring it not to engage in further confrontations with Israel.