In an interview, Jamil Mezher, a member of the Popular Front for the Liberation of Palestine's' political bureau, told Al-Monitor that the division between Fatah and Hamas is preventing the renewal of the political system in Palestine. 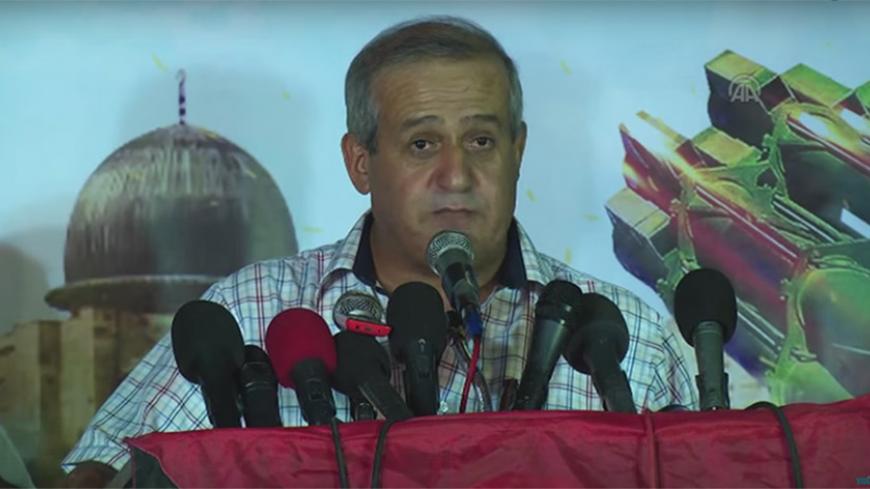 Jamil Mezher, a member of the Popular Front for the Liberation of Palestine's political bureau, is seen in a video still speaking during a rally in Gaza City, Gaza, Oct. 5, 2015. - VideoNews

GAZA CITY, Gaza Strip — Al-Monitor met with Jamil Mezher, a member of the Popular Front for the Liberation of Palestine's political bureau, at his office in Gaza City. Among the several Palestinian issues he discussed in the interview were the decline of Arab and Palestinian leftism at the expense of the advancement of Islamist movements, the most efficient Palestinian tools to resist Israel, the obstruction of the Palestinian internal reconciliation and general elections since 2006 and the current situation, problems and stances of the PLO toward ongoing Arab armed conflicts.

“The Popular Front for the Liberation of Palestine, the largest Palestinian leftist party, supports the establishment of a Palestinian state on the 1967 borders with Jerusalem as its capital, while ensuring the Palestinian right of return to the land they escaped in 1948 under UN General Assembly Resolution 194 that was adopted as interim solution to the Israeli-Palestinian conflict. The PFLP, however, has not abandoned the strategic solution to this conflict, which is based on the principle of establishing a Palestinian state on all Palestinian territories occupied in 1948, for all its citizens, without distinction of any kind,” Mezher said.

Al-Monitor:  The PFLP was established in 1967 and is an old organization compared to Islamist movements such as Hamas and Islamic Jihad. Yet the political influence of Palestinian and Arab leftism has declined in the Arab world, while that of Islamist groups has increased. Why?

Mezher:  There are objective reasons behind the decline of international, Arab and Palestinian leftism, which led to the increased expansion of Islamist movements in the Arab region. Most importantly among these is the socialist system’s collapse, which started with the collapse of the Soviet Union in 1991. This reflected negatively on the strength and presence of leftism in Palestine and the entire world.

Another reason is US support for moderate Muslim countries such as Egypt, Jordan and Saudi Arabia in the face of radical Islam. This has also contributed to the predominance of Islamist movements over left-wing currents in the Arab countries. Nevertheless, I think that the PFLP still has a presence as a central power in Palestine, and is still committed to the Palestinian constants and rights. Its popularity and influence surpass all Palestinian leftist forces.

Al-Monitor:  There are two groups of Palestinian factions struggling to run the Israeli-Palestinian conflict. There is Fatah, which believes that negotiations and diplomacy are the best option to end it, and there is Hamas and the Islamist factions, which perceive that armed resistance is the best option to end it. Where are you between these two, and which option is the most appropriate at the current stage?

Mezher:  The peaceful negotiations achieved nothing over the past 23 years, in light of the US bias toward Israeli policies. Also, the armed resistance alone has not succeeded in resolving the Israeli-Palestinian conflict.

Thus, we are calling for the formation of a unified resistance front that would develop a unified national strategy with all forms of resistance, including the diplomatic, legal, political, armed and popular resistance. This would be through a political confrontation with Israel in international institutions and a legal confrontation in international courts, as well as intensified efforts to boycott Israel at the political, economic and academic levels. This is added to countering the Israeli confiscation of Palestinian land through popular resistance and defying the Israeli military attacks on our people through armed resistance. This is all important in the struggle, and we support all forms of struggle. But how to determine the tool of confrontation with Israel? This should take place through the unified resistance front that we are calling for, and which would be tasked with the management of the resistance and struggle tools and tactics, in a way that would serve the Palestinian people. For this reason, we call for determining the resistance tools with a national unified decision, not a decision by a particular party.

Al-Monitor:  What about the failed Palestinian reconciliation dialogue between Fatah and Hamas? Do you think that reconciliation cannot be achieved through bilateral talks? In case reconciliation is not achieved, what are the alternatives?

Mezher:  The Fatah-Hamas bilateral talks are based on quotas and sharing of power and interests and will not lead to a serious and radical solution. These talks gave each party the right to object to whatever does not serve its interests and desires. Thus, they consist of unfruitful meetings. We call for a comprehensive national dialogue that includes all Palestinian factions, and not bilateral meetings. This would be a real guarantee to reach a serious agreement ending the split and restoring unity to serve the Palestinian people’s interests, not those of a particular side.

In this context, we recently received — along with the rest of the Palestinian factions, including Hamas and Fatah — a Russian invitation for a reconciliation meeting in Moscow between all factions. The meeting is scheduled to be held Jan. 15-17, but we are not optimistic that it will lead to concrete results, and we believe that it will not be much different from the previous reconciliation meetings, because there is still a lack of genuine will by Hamas and Fatah to end the division.

Despite all that, we assert that there is no alternative for the Palestinian reconciliation and for the agreement on a common national vision and denominators to restore national unity. The failure to reach reconciliation means more slips, more divisions and fragmentation and further deterioration of the internal political and economic situation. This will also mean more daily life crises, such as the worsening electricity crisis, which we believe is a political issue.

Mezher:  Elections are important and necessary for the renewal of the Palestinian political system and to pump new blood into the Palestinian leadership. Elections are also part of the understandings of the 2011 Cairo Agreement and would end the current division by allowing the people to choose their representatives, presidents and leaders. This, however, has not been applied or implemented due to disagreements by both parties to the internal conflict.

We expected the local council elections to pave the way for other elections, but unfortunately they were disrupted by internal disputes. The problem is that any party to the division can easily thwart and disrupt any national and democratic elections and prevent the Palestinians from exercising their democratic rights. The dispute between the two parties is depriving the Palestinians of their chance to renew their political system.

The continued election freeze is a manifestation of the bitter division at all levels. It also entrenches the dominance and monopoly of each party over the geographical section it controls, [leaving] Hamas as the de facto government in Gaza and Fatah ruling single-handedly in the West Bank.

Al-Monitor:  What is your position on the PLO, which Hamas calls for reforming? What do you think are the measures and procedures necessary to reform the PLO?

Al-Monitor:  Fatah's seventh general conference, which was held from Nov. 29 to Dec. 4, stressed the need for holding a new session for the PLO’s national council within the next three months. What is your take on this and what is your position vis-a-vis the national council meeting?

Mezher:  The meeting of the PLO’s national council does not only concern Fatah but is rather a Palestinian national issue. Therefore, we call for convening this council to elect a new council and discuss the PLO’s political program. This is a matter of paramount importance that should not be delayed. Should this step go forward, it would be a significant stride on the path of reforming the PLO.

The national council is required to agree on a new political program for the PLO and to abolish the current one, which is based on giving priority to negotiations with Israel. This program has not led to any positive outcomes, as we mentioned earlier. The new political program ought to serve as a unified national strategy, aiming to isolate the State of Israel internationally and to call for convening an international conference vested with full competencies to implement the international resolutions in favor of the Palestinians that have been issued over years of conflict. Such resolutions include the condemnation of settlements, most recently UN Security Council Resolution 2334, which condemned Israeli settlements, calling upon Israel to stop them immediately in the occupied Palestinian territories of 1967. These should be the pillars of the new political program of the PLO to make a breakthrough in the Palestinian situation.