The inclusion of Hamas, as well as Islamic Jihad and the Popular Front for the Liberation of Palestine (PFLP), in the PLO could strengthen the influence of the "resistance" wing within the organization. 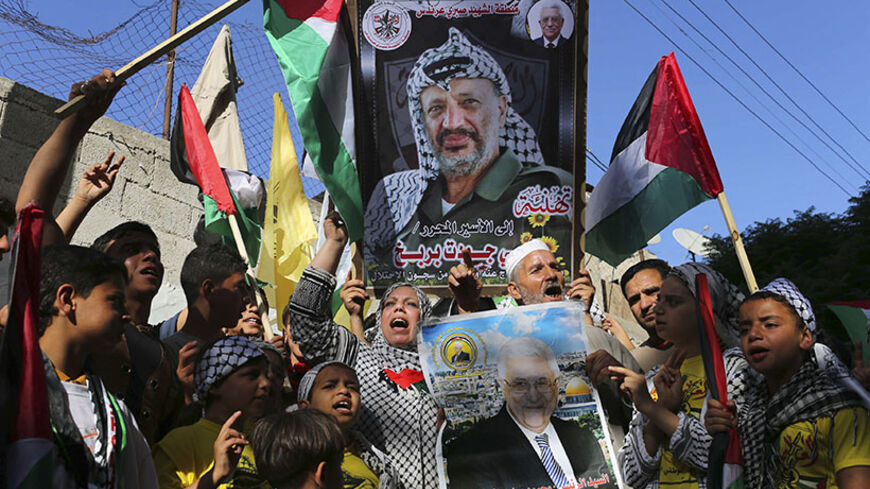 GAZA CITY, Gaza Strip — Hamas eagerly awaits joining the institutions of the Palestine Liberation Organization (PLO), which are controlled by its political rival Fatah, pursuant to the provisions of the reconciliation agreement signed between them in Gaza City at the end of April. Hamas intends to effectively participate in representing the Palestinian people before the regional and international community, as the PLO is considered to be their legitimate representative.

Hamas surrendered governance of the Gaza Strip to the Palestinian unity government formed by President Mahmoud Abbas, once its political and financial prospects as well as its ability to rule the Gaza Strip dwindled. Yet, its current handing over of the reins is conditional on its participation in the PLO, the largest Palestinian organization at home and abroad.

Mousa Abu Marzouk, the deputy chairman of Hamas’ political bureau, affirmed during a conference, titled “Half a Century Since the Formation of the PLO,” organized by the Palestinian History and Documentation Center in Gaza that Hamas’ entry into the PLO aimed to address the contentious political issues upon which Palestinians disagreed. He indicated that Hamas recognized the PLO to be the legitimate representative of the people during the Cairo talks of 2005.

Hamas continues to await the convening of the Provisional Leadership Framework of the PLO, which was established pursuant to the Cairo Agreement, but has met only three times since. Hamas contends that, according to the latest reconciliation deal, Abbas was supposed to call for the fourth meeting to be held four weeks after the reconciliation agreement was signed; a call that has yet to occur. Abu Marzouk added that Hamas erred when it recognized the PLO as the legitimate representative of the Palestinian people.

In his conference speech on June 4 in Gaza, Abu Marzouk said: “Our recognition of the PLO prior to becoming members therein was a historical mistake. The second mistake is the fact that President Abbas alone can call for the Provisional Leadership Framework to convene, which he only did three times. We want the Provisional Leadership Framework to unify the Palestinian people and be the decider in future political decisions, now that the PLO has grown old and is no longer relevant on the Palestinian scene.”

As part of the agreed-upon agenda with Fatah, Hamas will try in the coming period preceding the holding of parliamentary, presidential as well as Palestinian National Council elections to restore its popularity. Hamas’ popularity has greatly waned, particularly in the Gaza Strip during the years of its reign, as a result of the siege imposed upon it.

A leading Hamas source, who spoke to Al-Monitor on condition of anonymity, said, “We are at a pivotal moment of the movement’s history, where we need to find the tools required to restore the popularity that Hamas lost as a result of the hurdles placed before it during the past seven years of rule.”

“Hamas is confident of its popularity among Palestinians. We may be less popular than we were in 2006, but the movement’s popularity in the West Bank remains high when compared to the Gaza Strip. We lost some of our supporters, whom Fatah did not succeed in winning over. Hence, Fatah will not have the upper hand in any upcoming elections, as proven by opinion polls conducted internally by the movement,” he said.

Details concerning rebuilding the PLO remain vague to all Palestinian factions. Yet, it is clear that Hamas possesses a set agenda in that regard for the coming period, which will revolve around reshuffling the human constituent, restructure institutions and review the political agenda adopted by the PLO.

Hamas leader Bassem Naim told Al-Monitor: “Reassessing the PLO’s agenda is axiomatic following its restructuring through elections at home, and in countries that host Palestinian refugees, as dictated by internal factors there. If elections cannot be held in those countries, then the Palestinian factions will agree on the appointments to be made. The program previously approved by the PLO came as a result of autarkic leadership decisions without reference to the Palestinian people or its various institutions. This issue will be discussed once the National Council is formed and the PLO’s other institutions are structured. And we shall respect its decision if the National Council then chooses to continue recognizing Israel.”

Islamic Jihad has indicated that it might also participate in the Palestinian National Council's elections.

If Hamas and Islamic Jihad, which are the only two factions not already members therein, do join the PLO, they will increase the number of Palestinian factions in the PLO that reject Israel’s recognition. The Popular Front for the Liberation of Palestine (PFLP) is the only faction currently in the PLO that holds that position.

The PFLP’s leading official in Gaza, Jamil Mezher, welcomed the inclusion of Hamas and Islamic Jihad, boosting the “resistance’s ranks.”

“Hamas and Islamic Jihad’s entry into the PLO will significantly boost the national resistance’s ranks in the PLO; for they form an integral and important part of the people, and of the Palestinian resistance movement. Their presence in the PLO will therefore be important, necessary, and will give the PLO strength to overcome challenges and face the occupation, as well as contribute to giving support to the resistance movement against the occupation,” he told Al-Monitor.

Leaders from Islamic Jihad and the PFLP, however, did not seem in a hurry to talk about forming alliances with Hamas to unify the ranks of objectors to Israel’s recognition, once the PLO is restructured and internal elections held.

“It is premature to talk about this subject. Alliances are tactical in nature and associated with political programs on the national and social levels. The PFLP takes such tactical decisions based upon our people’s political and sociodemocratic interests. We agree with Hamas on certain issues, but disagree on others. The PFLP’s central committees will decide upon these matters in due time,” Mezher said.

Hamas, which throughout the years of its reign was accused of lacking legitimacy to represent the Palestinian people and was dealt with only as a de facto government, is now more keen on joining the PLO institutions and imposing its conditions on the rules of the Palestinian political game. Hamas’ goal will be to end Fatah’s monopoly over fateful decisions relating to the Palestinian-Israeli conflict.