Demand is growing among Palestinians for a third party as an alternative to both Hamas and Fatah, writes Asmaa al-Ghoul. 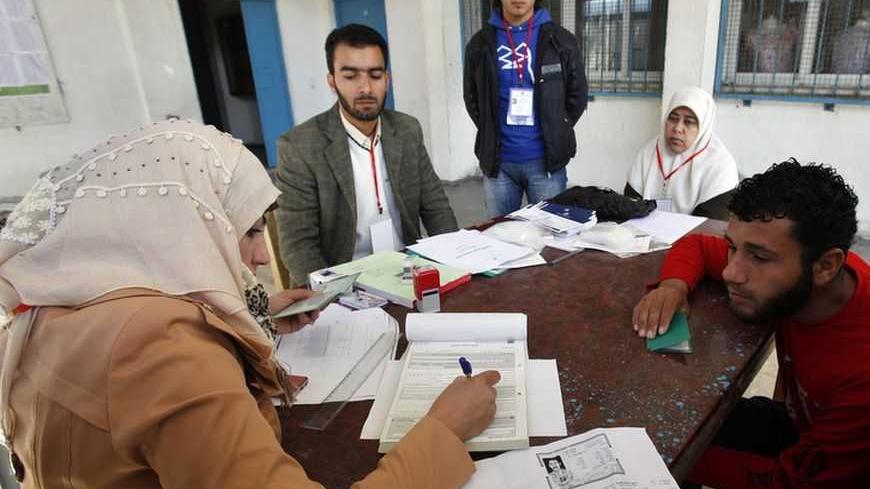 Soft war is the right word for the registration for the elections in the Gaza Strip. In fact, the number of people who have registered for the elections has reached a rate that has exceeded the expectations of the Electoral Commission, which estimated that up to 330,000 of those over 17 years old would register. The rate of those who have registered up until last Wednesday, Feb. 20, 2013, however, reached 351,000 citizens, according to reports from the Central Election Commission.

Iyad Krunz, a representative of Fatah's Central Election Commission, says that the large number of people who have registered in the Gaza Strip is due to the competition between the parties, adding that there is something similar to a hidden war between them. Parties are encouraging their members to register, and party members are encouraging their acquaintances and family members to register in order to be able to bring about change.

Krunz further told Al-Monitor that people want change, but through the ballot box. Therefore, the results came against all odds. He pointed out that an estimated 10% of registered voters — or 35,000 citizens — updated their data and are not newly registered.

Salma Shaath, 21, whom we met in the registration center at Bashir al-Rais in Gaza, told Al-Monitor that she registered for the elections because she wants to elect a new party that is different from Fatah and Hamas, as Gaza has tried both and is sick of them.

Salma's friend Zeina, 23, shares the same opinion. She says she will neither elect Hamas nor Fatah, adding: "We have experienced deprivation, blockade and electricity cuts under Hamas, and total chaos and corruption under Fatah. Therefore, I will vote for any other party that convinces me."

While it seems that the third party option is in demand, should the elections be held, the question is: Who will be this third movement that will save all those who do not want to vote for Hamas and Fatah?

Political analyst Talal Okal believes that the third party will be a group of figures seeking to achieve social justice, partnership, respect for pluralism and democratic mechanisms through a Palestinian national, political and social program. He confirmed to Al-Monitor that if this movement comes to materialize through electoral lists and expresses its identity to people, it would be a clear sign for people to vote for it.

Okal believes that the high number of people registering is a form of protest and a way to express the people's rejection of the reality on the ground in Gaza as well as their willingness to bring about change.

Okal believes that people are currently very curious about the alternative, especially after the split and the big failure, which, according to Palestinian citizens, has been caused by both Hamas and Fatah. "But the question is: Will this alternative manage to set forth a real vision, being an alternative to Fatah and Hamas, knowing that they are still the two major parties and that a third party will not be capable of eliminating them?" Okal added.

In a telephone interview with Al-Monitor, he said he is working very hard to bring together independent movements and unite all independent factions in more than 22 independent coalitions. This is aimed at bringing together thousands of figures from the West Bank, the Gaza Strip and the diaspora under one independent banner and one slogan, namely the Palestinian flag.

According to Wadia, the culture of independence disappeared after factions entered the game and after the role of independent figures fell, despite the fact that PLO founder Ahmed Shukairy was independent. Now, however, the people are the decision-makers and they support those who make national efforts and enhance compatibility away from narrow partisanship. He pointed out that their alliance includes scientists, businessmen and academics in an independent framework, away from parties or movements.

Dr. Rabah Muhanna, a member of the Political Bureau of the Popular Front for the Liberation of Palestine (PFLP), does not agree with Wadia. He believes that the experience of the municipal elections in the West Bank proved that independent candidates are weaker than the partisan candidates. When the security services in the West Bank threatened some independent figures with their livelihoods, some of them withdrew. He added that political action in Palestine is difficult and needs partisan affiliation.

He further told Al-Monitor during a meeting in his office that there is a great chance for leftist parties to form this third movement. In fact, the citizens perceive this movement as being everything that Fatah or Hamas are not and a movement that believes in national, democratic, libertarian and community issues. According to them, the third movement is broad, but lacks the organization that allows it to put forth a program.

He said that in the absence of an alliance, the PFLP will collect 8% of the votes in the upcoming elections, explaining that it collected 4.5% in the 2006 elections. This time, however, things could change in the event of an alliance between the leftist forces and movements, and the percentage will be larger.

He stated that there are serious attempts aimed at forming the Democratic Movement, to be announced at a conference in two months. This movement will consist of the People's Party, the PFLP, the Fida Democratic Union and a group of independents. It will have national, libertarian, social and democratic goals and will aim at tackling women’s and youth issues. He pointed out that they were initially working on the leftist coalition on an ideological basis, but they did not succeed. Therefore, they opted for a democratic and social approach.

Al-Monitor met with Bassam Salhi, secretary general of the People's Party, in the Beach Cafe while he was on a visit to Gaza to hold a meeting in order to form the Democratic Alliance between leftist and democratic movements. Salhi said, "There is a deep and wide thirst to unify the Democratic Movement and make it enter the elections. Although it is too early to talk about the elections, the fact remains that the debate about the democratic movement has been ongoing for a year now and considerable progress has been made between the leftist forces and independent figures."

Salhi said that the Palestinian experience confirms the need for a democratic and unified movement, in light of the polarization that is plaguing society. This creates the need for a balance and a democratic movement capable of easing polarization and reformulating priorities from a different angle. He added that the experience of Arab countries after the revolutions illustrates the need for a broader unification of national and democratic movements, which constitutes a challenge at the Palestinian level and another challenge at the wider Arab level.

He pointed out that this democratic movement may collect 12% to 20% of the vote in the upcoming elections if it remains unified and if it boldly puts forth its social and political programs.

Salhi said a good example might be the experience of the alliance in the West Bank during the local council elections in 11 cities. In fact, the alliances between leftist and democratic forces received 14% of the total votes. Back then, sometimes alliances were made between all of the left-wing movements and at other times between the People's Party and the PFLP, or between the People's Party and the Democratic Front on the one hand and the People's Party and independent candidates on the other. Salhi said that the West Bank is more difficult than the Gaza Strip because of its large cities, knowing that Hamas was out of those elections.

Salhi believes that the leftist forces, being a third movement, have an electoral base, but that this base is fragmented, and the movement does not have a direct platform. Thus, the goal of the Democratic Alliance is to bring the base together and advance a vision that meets the demands of the youth and women.

Returning to the topic of registration for the elections, Wadia, Salhi and Muhanna said that all their parties and groups sought to mobilize the largest possible number of supporters and urged them to register in preparation for the upcoming legislative and presidential elections. At that time, it will be difficult to describe it as a soft war.